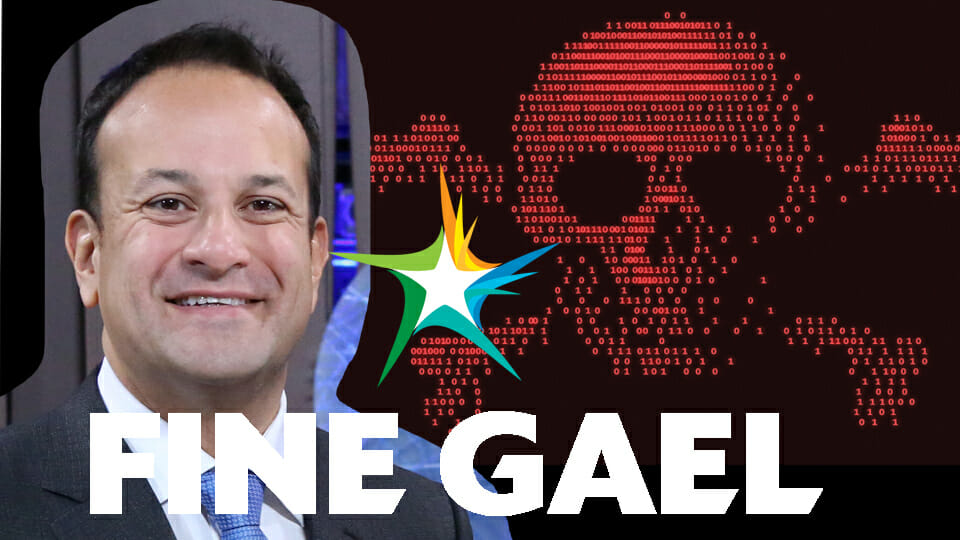 This article is co-authored with Dara J Clooney

Since the foundations of the state, our country has been ruled by two dominant parties. These parties are historically distinguishable only by their loyalty to two different men in the bitter division over the Anglo-Irish Treaty of 1921 and many often say, Fine Gael and Fianna Fáil – two cheeks of the same arse. You would be half right.

There are differences between the parties, that’s for sure. Fianna Fáil has at different times throughout its history been a staunchly conservative and protectionist party, a socially conservative party with an affinity for economic left populism and today, an empty vassal of the ‘progressive’ agenda that tries desperately to appeal to what it perceives to be the ‘public mood’.

Fine Gael has always been a much steadier and solidly fiscal conservative party with an internationalist outlook. Socially, it has lurched from conservatism to liberalism without radicalising itself too much, until recent years. Today however, like Fianna Fáil, it is an empty vassal of the ‘progressive’ agenda that tries desperately to appeal to what it perceives to be the ‘public mood’.

These two parties are now the same, save one important difference- their grassroots memberships. The memberships of both parties comprehensively reject coalition and in recent weeks, both youth wings of the parties also rejected the suicide pact. You’d imagine that this would be a sign that the party leadership of FF and FG would take note of. Their memberships are, after all, the foot soldiers who run election campaigns. They ignore it of course and this becomes more insulting to the memberships when you do a quick google search for “Fine Gael/Fianna Fáil members reject coalition”. You’ll find tonnes of articles from local and national media in recent weeks as the branch networks of FF and FG, like dominos, rejected any notion of coalition with each other.

The members are right, and we now have a situation where the grassroots and party leaderships of both FF and FG are completely divided, with no tangible connection between them. This is disastrous for any political party, but it will surely sound the death knell for Fine Gael. The reason we suggest it will be Fine Gael who meet the grim reaper is simple – they have the most to lose.

They have governed since 2011, they’re currently leading the country through one of the greatest crises in recent decades and they have an opportunity to solidify themselves as the natural party of government for the next decade.

Fianna Fáil, on the other hand, is desperate to be in government, and its party leader still cites the implementation of “his” smoking ban in 2004 as if it were the second coming of Christ. They can best be saved by one thing – the death of Fine Gael. They know this and that is why Michael Martin is trying desperately to enter coalition with FG and now, the Green Party of economic Armageddon. Martin knows that FG have more to lose. We agree.

The Fine Gael membership is much more centre-right oriented economically than FF and certainly the Greens. There is a large and increasingly unified conservative wing of FG that includes Ministers, TD’s, Senators, Councillors and a large chunk of the youth membership that is both appalled by the current trajectory of the party but is also willing to work quietly and effectively to save the party from its pro-coalition, progressive leaders and members who insist on marching onwards to ‘woke’ heaven.

The recent coalition document produced by FF and FG is akin to something that would be produced by a university student union in ten minutes and is awash with the same social virtue signalling and leftist economic pandering that both FF and FG has relentlessly pursued for a number of years in their suicidal race to the left. The consequences of this have been felt electorally, where the combined vote share for FF and FG has lagged around 50% since 2011 when it dropped (for the first time in the history of the state) to 49.83%. This downward trend has continued, and combined support dramatically dropped to 43.1% in the recent February general election which marked the first time ever where both FF and FG together, couldn’t muster up a majority of seats in the Dail. Yet, the leaderships of both parties appear to be immune to these warnings. The survival of both rests on their ability to define themselves from each other, to fashion their own unique identities and abide by their own principles. This has been largely lost since the commencement of the confidence and supply arrangement in 2016 and it will be entirely buried if they choose to coalesce. However, you might say that this is mutually destructive for both FF and FG.

Perhaps but, enter the Green Party. It is the alarmist and radical greens who will sound the death knell for FG but not for FF because their policies will disproportionately affect the traditional FG voters, such as farmers, who have been abandoning FG for a number of years now. Already, FG has capitulated to the greens on almost everything, which is perplexing because it would mark a complete departure from FG being the party of sound economic, market-based principles.

The Green Party wish to enter government on the invitation of Fine Gael and Fianna Fáil to wreak statist, anti-rural, anti-worker Armageddon. Drawing on emotional blackmail in times of hardship, they propose unrealistic solutions that will empty pockets and destroy the lives of ordinary workers and rural Ireland. As one senior Fine Gael TD told us, “The fundamental problem with the Green Party isn’t that they don’t understand rural Ireland. It’s that they have no interest in understanding it, and instead just want to preach at it and visit it.”

Too often we see climate change solutions focusing on state intervention and taxing one’s way out of trouble. This is found in both the Framework Document, itself a dowry, and in correspondence between parties. Instead of incentives for green business, enterprise and lifestyle we see daft proposals and meddling demands. This might wash in Frappuccino-sipping areas where hemp handbags, Birkenstocks and windowsill vegetable gardens are commonplace and reliance on public transport or bicycle is the norm, but what Eamon Ryan and his Merry-men fail to realise is that most Irish people don’t live like this. These proposals will rob the working class and rural Ireland to pay for bicycle lanes in Donnybrook. It will crucify people across Ireland who have no other options. This insanity comes at a time when ordinary families, the elderly and rural areas see growing unemployment, a fall in living standards and their communities decimated, with recovery prospects negative. The Green part are out of touch. Who do these sanctimonious, ivory tower dwellers think they are?

Both correspondence and Framework Documents contain malevolent discussion. We see unworkable carbon tax and emissions plans. There is little to no transport investment for rural Ireland, yet I suppose we will be expected to carpool. Just Transition is skipped over with sparse detail. But such communities deserve a fair, detailed deal lest these areas become desolate. Communities that are regularly pilloried by academics and Green politicians, might be forgiven for protesting and claiming their concerns are not being heard. Universal Basic Income, or Trojan horse, rears its ugly head. Are we willing to jeopardise small businesses and employers nationwide by forcing them to pay higher wages post pandemic? We are told Irish agriculture, a bone of contention for many Greens will be “recognised”. Whether this “recognition” comes in the form of culling the national herd remains to be seen.

We cannot continue to fool ourselves into thinking that we can tax and regulate our way out of this. We should instead pursue sensible, enterprising solutions.

Tax incentives for green companies or those wishing to adopt green business models would entice entrepreneurs and empower business owners, thus ensuring the growth of a sustainable green market for years to come. Localist policies should also be pursued. Buying local helps your local community and the businesses in it to grow, thrive and prosper. It also results in lower costs and less pollution, whilst bolstering community spirit and ensuring a vibrant local economy. This is a deal far more effective than growing salad on our windowsills and would surely be advocated for by Fine Gael, a party of common-sense market-based solutions?

However, the State can take a sensible, pragmatic role. It should support conservationist efforts nationwide alongside the OPW and volunteer groups, safeguarding our national amenities and landmarks for future generations. Laws surrounding illegal dumping in rural areas and in coastal regions should be strictly enforced. The feasibility of green bonds should be considered. A Citizens Assembly must be rejected. Dáil Éireann should be the only assembly of citizens in Ireland. We cannot leave any more momentous decisions to “randomly selected” groups who are often possessed by ideology with little care of the impacts of their decisions or those with no legal, administrative or public service credentials. Let politicians do what they are elected to do and stop outsourcing uncomfortable issues. Let them play their part and we shall play ours.

Climate change effects everyone. But up until now the discussion surrounding it has gone in one direction. Those on the right must recognise climate change as a relevant issue and develop solutions accordingly. “Green Capitalism” has massive potential for profit and incentivises transition, something infinitely better than State encroachment, excessive taxation and onerous regulation propagated by the Greens. If we fail to do so, the Greens monopoly on the issue will only continue, and when they will come to power disaster shall follow. Let us therefore smash the Green monopoly with the hammer of freedom.

And let’s do it our way. The way that Fine Gael could and should do it, the way that saves itself from certain death but also rekindles its centre-right principles. Yesterday, Simon Coveney, one of the main architects of the coalition thus far, let his mask slip when in an interview with the Irish Examiner. He responded to the Green Party’s ‘red line’ of a 7% reduction in carbon emissions by saying, “I am not going to put farmers out of business.” He knows this is ludicrous, we all do, so stop this charade.