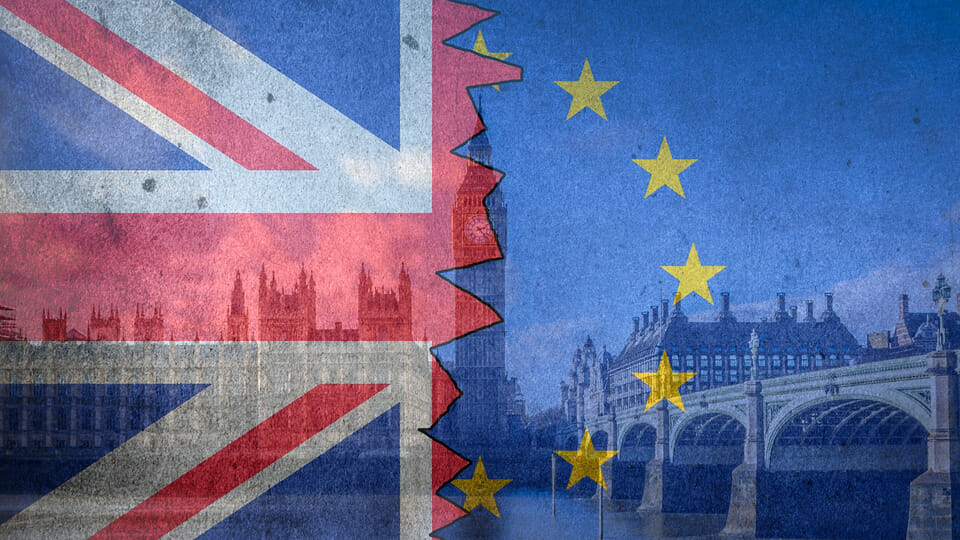 Peace, prosperity and friendship with all nations. These are the words that appear on the United Kingdom’s new 50p coins due to come in to circulation in Great Britain and Northern Ireland today to mark ‘Brexit Day’, the day the UK formally leaves the European Union. Brexit won’t be ‘done’ just yet,however, despite Boris Johnson’s often-touted mantra. The UK now enters an 11-month transition period where EU law still applies in the UK and the trading arrangement with the now 27 member EU bloc continues as before. Now the herculean effort of fleshing out a new trading arrangement begins in earnest.

In the days that followed the UK’s Brexit referendum in June 2016, I had the opportunity, for one reason or another, to speak with former senior UK and Irish politicians, as well as many ordinary British, Irish and European folk of varied vintages. Their reaction to the historic vote, regardless of their background, was largely the same – one characterized by sheer disbelief. Their disbelief was childlike and viscerally palpable, reminiscent of a naive child being told the cruel truth about Santa Claus or the Tooth Fairy. It was clear that worlds had been shattered. The all too comfortable cocoons safely housing their ingrained left-wing sacred cows were crumbling, revealing a terrible chrysalis that threatened everything they held dear.

In the months that followed we suffered myriad days of endless nonsense from sundry talking heads in the media, waffling about an issue they neither understood nor accepted. Across the UK and Ireland there were calls for a second referendum, one returning the ‘desired result’. The chattering classes were up in arms, bemoaning how an otherwise sophisticated British electorate was duped. Surely, they thought, the Great British public would come to their senses, returning to the ballot boxes with an embarrassed smile to override their original folly. That wasn’t to be, however. Boris Johnson’s sweeping victory in December’s UK General Election put an end to calls for a second referendum and the general public, on both sides of the Irish Sea, largely bit their lips and returned to a private life or bitter acceptance.

The disbelief that characterized the public reaction to the Brexit referendum is the result of a complete lack of understanding of the EU, its history, purpose and aims. For most people, the EU is no more than a club of cooperating‘nation states’ with the aim of keeping peace in Europe, born out of the horrors of the two World Wars, a remote political body with very limited authority. In reality, ‘quiet men’, as they are known in Eurosceptic circles,have been working for the best part of a century to take power from the ordinary citizens of the nation states of Europe, handing that power to a centralized bureaucracy almost entirely immune to the ballot box.

Having humble origins in the visionary idealism of two Europeans in the first half of the 20th century, Altiero Spinelli and Jean Monnet, the EU has evolved into an entirely new form of ‘supra-national’ government that legislates and regulates almost every aspect of our lives. Monnet and Spinelli dreamed of a‘United States of Europe’, one that would evolve by a series of opaque and irreversible incremental steps until the infrastructure of national governments throughout Europe would cease to function in any true sense, other than acting as regional conduits for the rubber stamping of EU law.

Just like a state, the EU has no internal borders. It has its own parliament,Executive Government (the Commission, unelected by popular vote), it’s own court (the ECJ), its own flag, its own anthem (Ode to Joy) and its own civil service. It ceaselessly governs everything from our monetary and energy policy, right down to the types of light bulbs one can and cannot use in one’sown home. The Lisbon Treaty, which was ratified by all EU Member States in 2009, copper-fastened the already existing principle of the supremacy of EU law, a principle that states that EU law prevails where there is a conflict between the law of the Union and the law of its Member States. In other words, Brussels calls the shots.

The reaction to the Brexit vote in Ireland is born of pure ignorance in all things EU, ignorance existing within the highest echelons of politics and the media right down to the ordinary Joe-citizen. On this week’s Claire Byrne Live Leader’s Debate on RTE, Fianna Fáil leader Micheál Martin lambasted what he sees as Sinn Féin’s overly-powerful, unelected Ard Chomhairle:

“….it means external unelected people will dictate policy just as it happened in the north of Ireland’s executive. That is wrong. It’s fundamentally contrary to our traditional parliamentary democracy”.

The irony was lost on Mr. Martin, given that his party fully support the European Union, where the unelected European Commission are solely responsible for proposing new law for EU member states, including Ireland.

Micheál Martin’s hypocrisy exemplifies the breathtaking lack of understanding of the EU that exists among the Irish establishment and, by extension, in the wider public sphere. Is it any wonder, then, that almost four years on from Britain’s historic Brexit vote, the Irish establishment and the chattering classes are still perplexed by it all? Who knows, they might one day discover the truth about Santa Claus.

John-Paul Mac Cionaoith is a social and political commentator and activist, with a background in psychology, law and business.

No, the Covid-19 measures do not amount to socialism