The Spanish philosopher Leonardo Polo (1926-2013) is not well known in the English-speaking world, and even if he were, his work is challenging for the lay reader. However, his ideas on what it means to be a free human being have inspired many students of philosophy, including Dutch university teacher Daniel Bernardus, who has, in this challenging year for freedom, published an English translation of a key lecture given by Polo in 1990.

Roots and Liberty (“Lo radical y la libertad”) comes with Daniel’s popular introduction, and under the general title Freedom in Quarantine. Although the introduction is enough by itself to convey the relevance of Polo’s thought for our historical moment, reading the full translation of his text is well worth the effort. Here the translator answers a few questions to bring out some key ideas.

MercatorNet: We are living in an insecure and fraught time, threatened by a pandemic on one hand and economic ruin on the other. Then there is climate change, and Black Lives Matter and other identity movements that challenge the established liberal order. Freedom and power are major issues. How can Leonardo Polo help us in this crisis?

We are certainly living in insecure times, and the sheer size and complexity of the problems we face may seem overwhelming. Leonardo Polo has been characterised as a philosopher of hope. Hope avoids two extremes.

On the one hand it avoids the temptation of quick fixes, short-term “solutions” that end up only aggravating problems in the long run.

Polo is a philosopher, not a politician. He does not provide roadmaps or other political action plans, what he contributes is a reflection on the fundamentals. And especially when everything seems to be tumbling down, going back to the starting points is something that is badly needed.

What do we mean by freedom? What do we mean by power? Of course, Polo is not the only one to be asking these questions, but he stands out in his capacity to learn from the greatest thinkers of all ages, and to come up with a coherent synthesis of their thought.

I find his synthesis original, inspiring, convincing, and, above all, hopeful. It provides a mirror that helps me grow as a person, and that has power to inspire people to grow as persons more broadly, and ultimately inspire a renewal of well-founded hope in society.

MercatorNet: Polo has some very interesting things to say about the way the modern world values and expresses freedom. What is his key idea?

Polo points out that the modern idea of freedom is onto something important that was absent in classical thought. Modern thinkers value the ability to produce as an expression of creative freedom. Classical thought focused much on causality, but human beings don’t just “cause” their products as something that is an expected outcome of their activity. No, human invention has a real element of free innovation. That is a very valuable insight.

However, modern thought has its problems. If we put too much emphasis on what we produce and how efficiently we do so, we may lose sight of the “why” of it all.  We may be producing a complex world, without any criteria to order it by. Postmodernism has, among other things, criticized modernity about this problem.

The modern idea of freedom generates complexity, but does not provide a sense of direction to navigate complexity. It does not help us make complex value judgements like comparing the importance of protest marches and church services during lockdowns.

We are left with a moral relativism that is at risk of sliding down into the law of the jungle; because if we cannot agree on what to prioritize by reason, then we will have to prioritize by other means, for example by the use of force.

MercatorNet: At a time when Western civilisation is dismissed by some as a system of oppression it could be difficult to get a hearing for the ancient Greek philosophers, but let’s try. What would they most want to tell us about human nature/freedom?

A complete introduction to the classical view of human nature and freedom is too much for now, also because in our current culture we find that difficult to relate to. The difficulty comes exactly because western culture has been actively forgetting some of the core classical insights for centuries. Polo points out they are still present, though, in the form of denials.

Historians say Amsterdam is the birthplace of liberalism, and as a resident of that city I can relate to the attitude of, “don’t tell me what to do”. So if a classical thinker comes and tells me that he has discovered eternal truths about what is good and bad for human beings, which they do, I understand the impulse to reject such claims offhand. It could be that much of the sentiment labelling the classical view as “oppressive” comes from this impulse.

However, what Polo invites us to consider is that these classical insights can be true yet incomplete. It may well be that learning some essential aspects of being human that the classics teach us is indeed good for everyone. A core example would be the ability to search for truth and live according to it. Such a habit can give coherence to our lives and our societies, and that in itself can give the support and stability many people crave at the moment.

MercatorNet: Christians tend to live by a stricter moral code and oppose things like sexual liberalism and euthanasia, yet Polo says that Christian thinkers have made the key contribution to understanding freedom. What is this Christian idea?

The Christian contribution is the notion that human beings are created as persons. Much of the notion of ‘person’ was developed in the context of Trinitarian theology. It refers to the uniqueness of each human being, where each person is not just an ‘exemplar of the human species’ but an actual someone, with a name, who is uniquely loved. At the same time personhood refers to the intimate personal relationships that someone has with other persons as friends and family. Personal freedom is therefore not individualistic, but points to everyone’s uniqueness in the context of loving relationships.

MercatorNet: The most exciting thing about Polo is his synthesis of what he calls the three “roots” of Western culture. He doesn’t “cancel” the modern idea of self-realisation through production but connects it to the other roots. How does he do this?

Polo makes very clear that on the one hand, being a person is what is most important about us. It gives meaning to all that we do and allows for unbounded personal growth. On the other hand, he insists that we can only understand the human person well if we integrate the insights from modern and classical thought. Also, we understand these modern and classical insights more deeply in the context of the person.

For example, the modern insistence on production stands in a new light if we see what we produce as a loving gift to society, inspired by a deeply personal creativity.

At the same time, the classical truths about the good life are taken to a new level if one understands that this life can additionally be given a very personal meaning through the loving relationships we choose to enter into with God and with other people.

But then in turn, these personal relationships will profit us a lot in terms of stability if we have managed to internalize the classical “good life”. In short, production is no longer impersonal and the “good” is no longer suffocating. Instead, there is always hope. There is always room for more personal growth.

MercatorNet: What are the consequences of the synthesis for some of today’s pressing issues: ecology, the family, inequality, bioethics…

There are very many consequences, and a great thing about Polo’s philosophy is that it is not a “finished system”. Rather, it is an open framework that invites ever further investigation, in a true academic sense. That is not to say that its interest is “purely academic”.

To give a brief example, I wrote a paper about how the integral ethics that Polo proposes, which integrates all the insights described above, would help to better ethically evaluate the mutation of human DNA for different purposes. But because Polo doesn’t over-simplify, these complex questions cannot now be answered in a single paragraph. Hopefully they will be answered in future books though.

MercatorNet: And finally, how can Polo’s ideas help us live as free individuals in our daily lives, even under restrictions related to the pandemic?

As one of my readers told me, the book “made me rethink my priorities in life in good way.” In a difficult situation, I think it helps to go back to the basics and think about what is really important in life. Polo’s reflections can help with that. 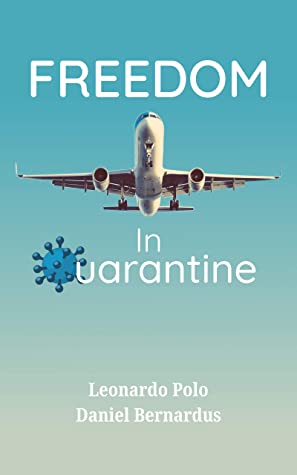 Daniel Bernardus writes from the Netherlands. He teaches biology at Amsterdam University College and is the director of Leidenhoven College, a collegiate hall of residence. He blogs at danielbernardus.com

Every newly created child should be a sign of hope to the world. That’s why pro-lifers march