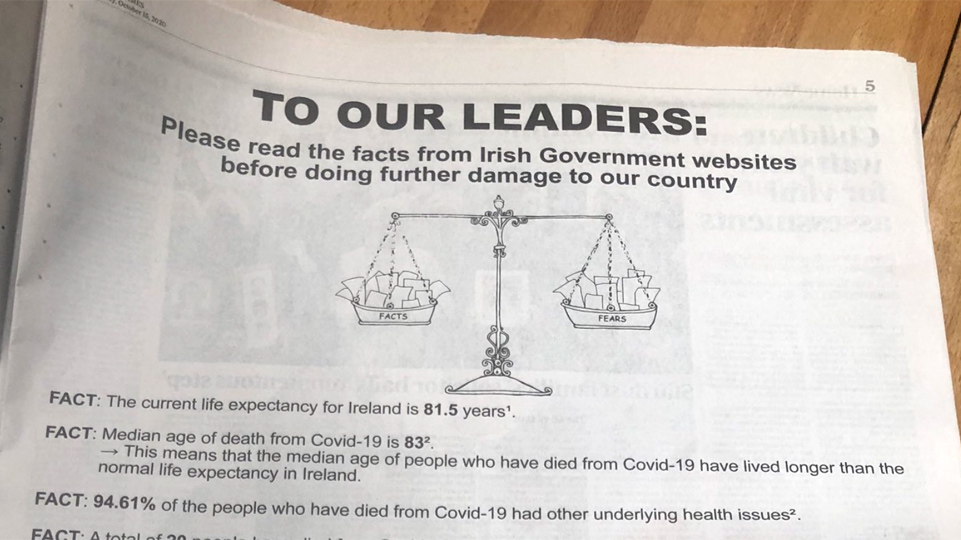 Some necessary background, before we get into the story: Yesterday, an advert appeared in the Irish Times, setting out some facts and figures in relation to Covid 19 in Ireland. The advert did not provide all the facts, nor did it seek to put them in context. As an advert, it was very clearly trying to make the case that the Government’s policy in relation to restrictions on business, socialising, and free movement, are mistaken. Here it is:

What the ad does, as you can see for yourself, is to present a series of factual statements, which are clearly designed to suggest that Coronavirus is less serious, and less worthy of massive state action, than the Government says it is.

And it ends with a call to action – asking whether there might be a better way to approach the illness than the policy adopted by the Government at present.

Is there room for debate on all of those questions? Obviously there is. For example, yours truly is not convinced that “only the old are dying” is a convincing argument, given that the old have as much of a right to continue living as the young do. But there’s nothing radically offensive about it, at least not to these eyes. But it is an advert, and it is clearly trying to argue a position, and it’s important to bear that in mind.

Managing Editor of Journal Media, Susan Daly, simply wasn’t having any of this, though. The Irish Times made the “Wrong call”, she said, in publishing the ad:

Would love to have heard the debate in Irish Times around publishing an ad that flies in the face of responsible reporting media in general has done around Covid.
And there MUST have been a debate if editorial felt the need to row in with a contextual article.
(BTW, wrong call.) https://t.co/vADVRCOOgo

And Ms Daly’s subordinate, Christine Bohan, Editor of the Journal.ie, went further: The ad was using “the same language as the far right”, she said, and should not have been published:

There's a responsibility on the media to be thoughtful and smart about what we publish. This ad is irresponsible. The language in it is the same as in many of the far-right Facebook pages we monitor (including the ones who turned up outside our door to intimidate us). Do better. pic.twitter.com/rfWO6lOv2w

If that was where the commentary ended, then fair enough: Both Bohan and Daly are entitled to their views, though it seems absurd to suggest, as Bohan does, that an ad should not be published because some fringe group somewhere occasionally uses the same argument. Either an argument is right, or it is wrong – it’s hardly relevant who makes it.

But that’s not where it ended. The fury in Journal Media circles that such an ad had seen the light of day led to them publishing a 2,200 word “fact check” which amounts to about the most dishonest thing any media outlet has done in Ireland in my memory.

“False”, it says. In other words, the ad, according to the journal, is presenting information that is untrue. When that fact-check gets shared on social media, we are to take from it that the advert in the Irish Times told you, the reader, a lie, and that the Journal, a neutral outlet, is now telling you the truth.

But let’s read what the fact-check actually says. Go read it all, in case you think we’re quoting selectively, here. This is what they say about the claim that their headline says is “false” (emphasis mine):

In Ireland, a Covid-19 death is notified in a person with laboratory confirmation of the virus, irrespective of clinical signs and symptoms (including where a test is carried out post mortem).

So if a person with Covid-19 dies from a heart attack or a stroke, their death will be recorded and added to the figures. The ad is correct in this regard.

This is because Covid-19 is a notifiable disease, and for surveillance purposes, the HPSC has to notify the Chief Medical Officer when someone with the virus dies.

“The ad is correct in this regard”. The ad is correct about the claim that they have just declared false. Now, that’s buried nearly 1,200 words into the fact-check, so you might miss it. But it’s not the only time they pull this trick:

Although this is true (based on up-to-date statistics cited in the ad), what is classed as an underlying condition can range from cancer to diabetes and high blood pressure.

“Although this is true”, they say, before making an argument that it doesn’t matter. That’s not a “fact check”, that’s just an effort to discredit facts that they don’t like people hearing.

It states that “the median age of people who have died from Covid-19 have lived longer than the normal life expectancy in Ireland”.

The median age of all Covid-19 deaths, 83, is therefore 1.5 years above Ireland’s current life expectancy according to the WHO.

The median age claim in the ad is contrasted with a further claim that only 20 people in Ireland have died as a result of the virus aged under 44, suggesting that older people are mainly susceptible to the virus.

It is important to note that although this is true and many more older people have died as a result of the virus in Ireland, this is partly because of the way nursing homes were affected during the first phase of the pandemic.

A further claim in the ad is that four times as many people under the age of 44 died in car accidents than as a result of Covid-19 last year.

“There is literally more chance of dying from being hit by a bus, a car or being in a fatal traffic collision than from Covid-19 – yet our government is not stopping people from driving.”

Once again, this is a misleading comparison based on skewed odds.

A “misleading comparison”, by the way, is a fancy way of saying “the ad is correct”.

Over and over again, the “fact-check” published by the Journal, which claims the ad to be false, is forced to admit that it is true. And yet, they are using their considerable reach and resources to tell people that the ad is false.

This is staggeringly dishonest. And it should be seen in the context of the statements from Bohan and Daly that they simply do not believe that the Irish Times should have allowed the ad to be published, because, in their minds, it used arguments that have also been made by figures on the so-called “far right”.

This is not journalism. It is a media platform abusing its power, and the trust placed in it by its readers, to advance the political preferences of its editorial staff.

These “fact checks” are little more, these days, than journalists making arguments and throwing a fancy name on them to claim a monopoly on truth. It’s bad for the public, it’s dishonest, and it should be devastating to the credibility of The Journal.ie.

MARY KENNY: My friend has quit her job rather than teach under Covid-19 restrictions