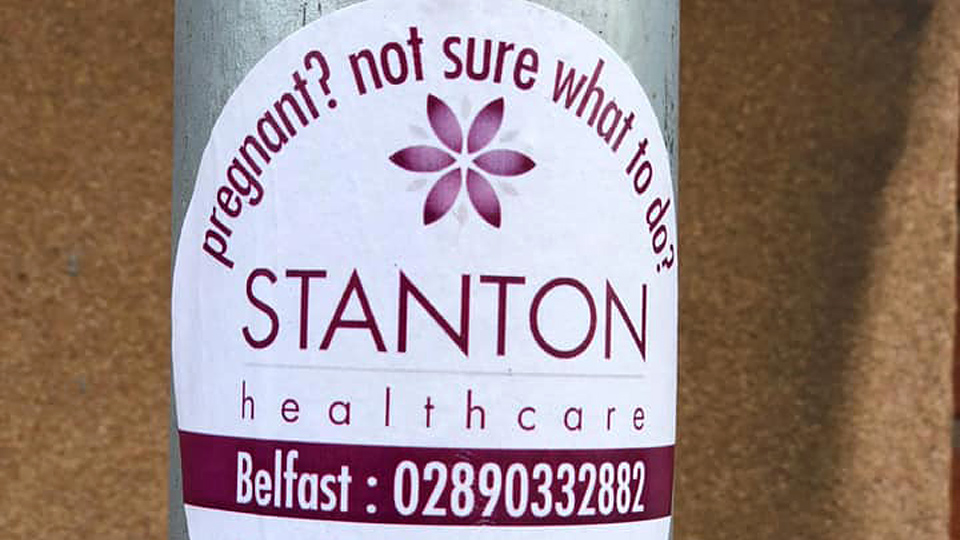 Alliance Councillors in Lurgan are facing a backlash on social media after posing for photos while removing information notices about Stanton Healthcare, a free service offering support to women with unexpected pregnancies.

Both Cllr Peter Lavery and Cllr Eoin Tennyson posed for photos while wielding scrapers to remove stickers advertising services offered by Stanton Healthcare, which says its mission is “to empower, encourage, help and support each woman who visits” the organisation seeking help.

“Pregnant? Not sure what to do?” the stickers stated. Cllrs Lavery and Tennyson both posted identical statements claiming the services being offered were “vile” and that “pregnant people” should go elsewhere for help.

However, both Alliance councillors faced a backlash from women on their Facebook pages for their actions, especially from those who had received support during a difficult pregnancy from Stanton Healthcare. 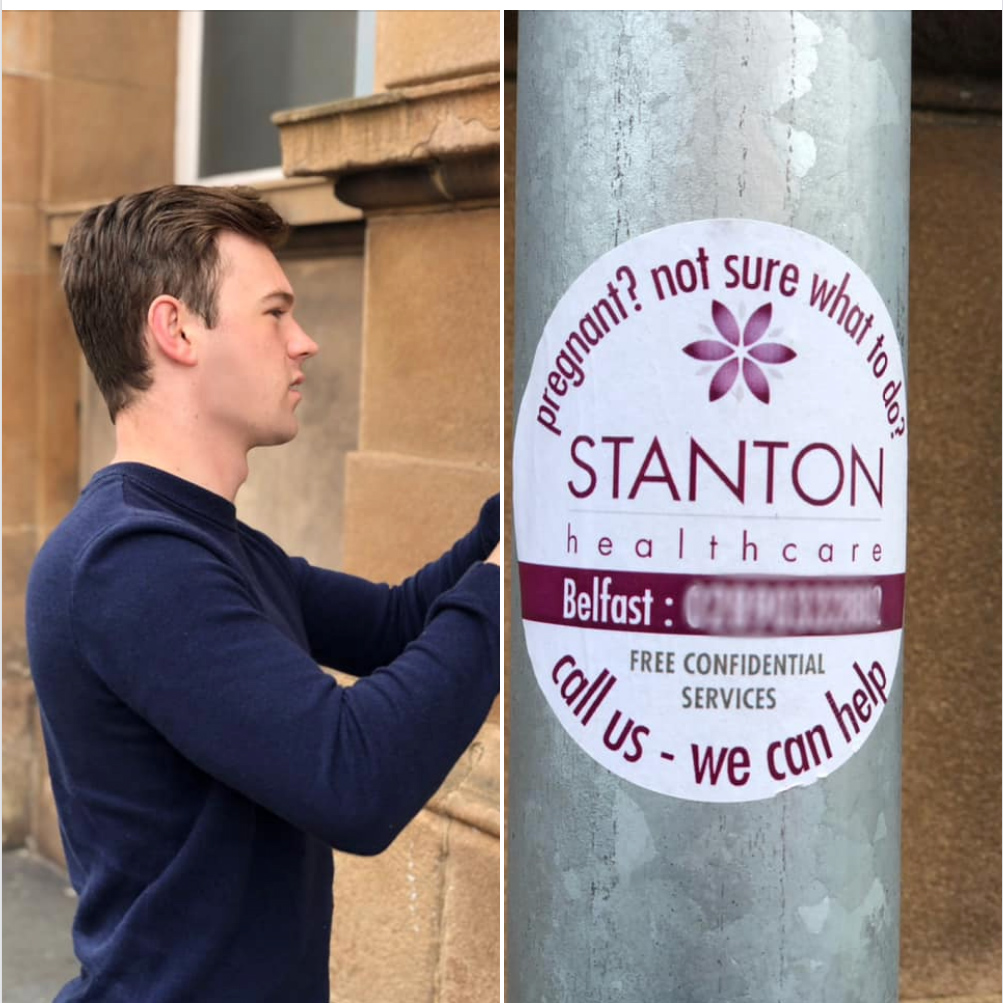 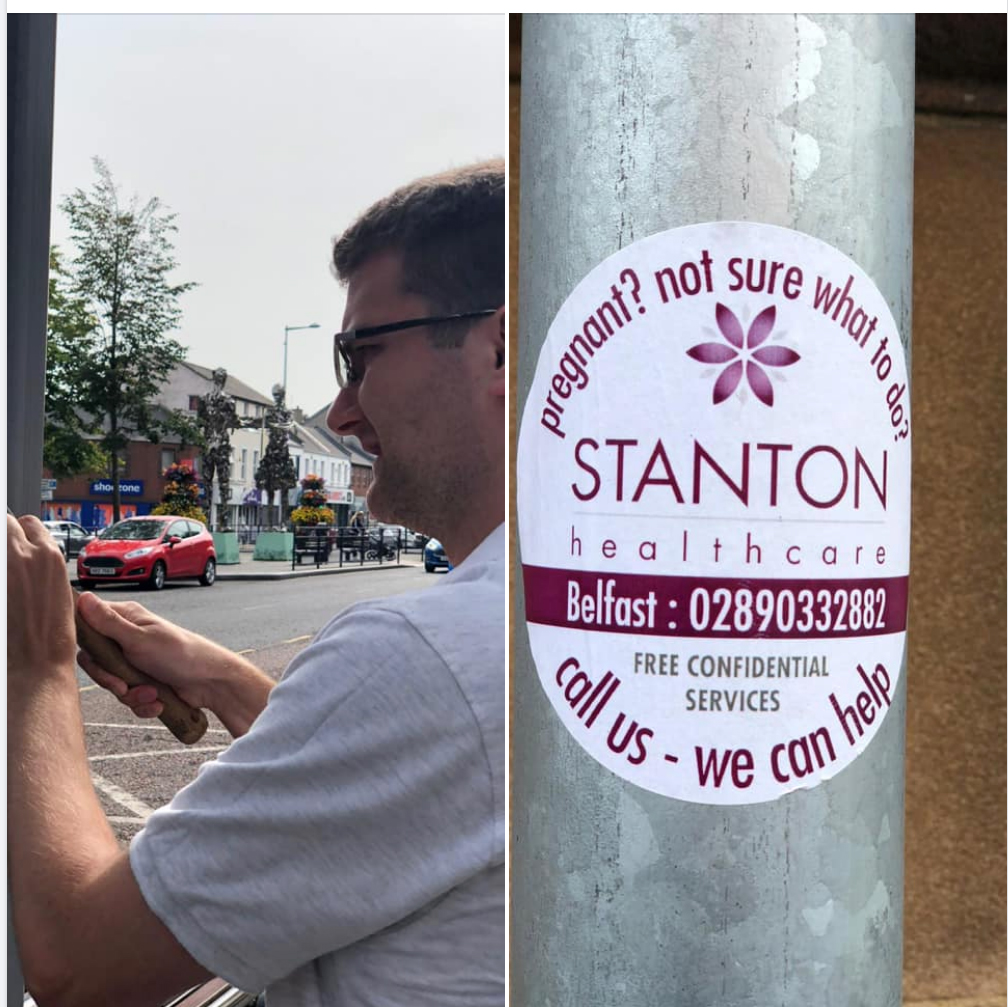 “Who are you to deny mothers of a much-needed free healthcare service?” asked one woman.

Yvonne Morgan who said she faced an unexpected pregnancy almost four years ago, said she has been empowered and supported by Stanton, and that the Alliance councillors offered no choice other than abortion.

“How dare you say that about Stanton, you have clearly never found yourself in a crisis situation! I sought help from Stanton, a healthcare facility that supported me and empowered me to make my decision to give life to my baby –  which in fact turned out to be babies, twin girls who are 3.5 yrs old and who bring so much joy to all our lives, ” she wrote.

“How dare you say Stanton is anti-choice, you clearly know nothing about them so I suggest you keep your disgusting comments to yourself, the only choice you’re clear about is the choice to abort and nothing else,” she added.

Other women pointed out that the decision to scrub information was a denial of a woman’s right to make an informed choice.

“Have you ever visited Stanton Healthcare Peter, or spoke to women who have used their services? Why can you not let women choose who they wish to contact?” wrote Lisa Murphy.

And Alison McClean asked: “Could you give me ONE good reason why you are against women being given help and support to keep their babies?”, while Trish Jones  wrote: “Thought you were supposed to be “pro-choice?” Only if the choice is abortion?! How sad 👎”.

Many women defended Stanton’s record in the field. “What you are doing in removing these is removing a woman’s choice. Stanton is one of many organisations that I know personally who provide a valuable and much needed service to pregnant women in a crisis and post abortive women needing emotional/mental help. Their help extends from counselling to financial, from baby clothes and supplies to benefit/housing help, and often a hand to hold for 9+ months and an understanding ear to listen. They give support and a valuable lifeline where it’s desperately needed. They are free services, given voluntarily and have helped hundreds of women who do not want to be pushed to abort their own children and who frequent feel they have no choice at all, given the society we live in. Anyone who is actually interested in helping women would NOT try to undermine an essential service in this way. Extremely disappointed and disgusted that Alliance councillors would attempt to silence compassionate, non violent pregnancy help, and deny women knowledge of where that help is available! Shocking behaviour,” wrote Maggie McDonald.

Aontú councillor and GP Dr Anne McCloskey said that women were entitled to have access to information about abortion and to evaluate it and fact check it.

Other women described the actions of the Councillors as “pathetic, attention-seeking” stunts, and urged them instead to tackle the real issues facing women and families in the area.

Supporters of the councillors’ actions accused Stanton of misleading women, a charge denied by the support services provider.

“Suspension of Constitutional rights “: anti-lockdown protest spokesman arrested ahead of event in Cork