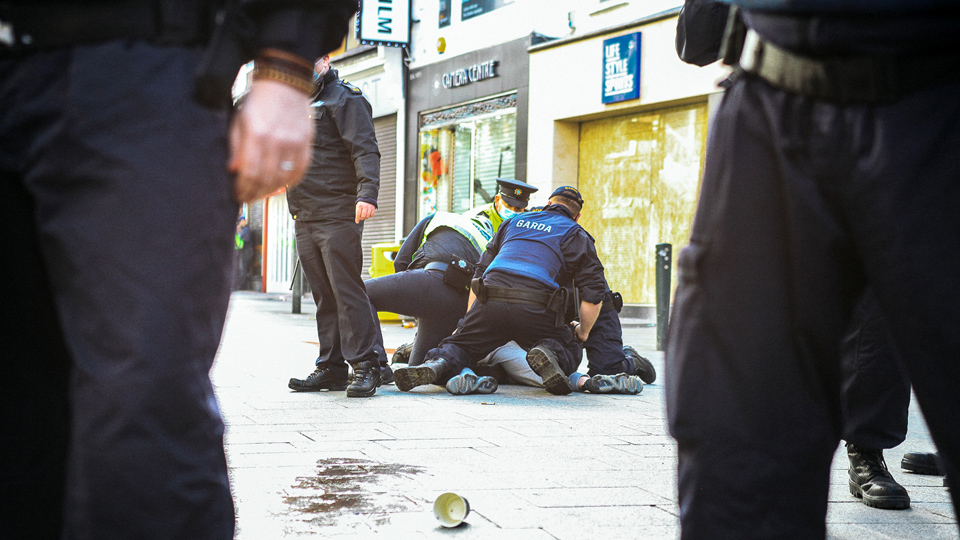 The question in the headline is not one which you really should be asking, in a modern western democracy, but asking it appears to be necessary. Consider this story from Chai Brady, a very good reporter with the Irish Catholic:

A Co. Cavan priest who has not prevented parishioners from attending Mass in the church has been issued with a €500 fine by gardaí The Irish Catholic can reveal.

Fr PJ Hughes, Mullahoran parish in Co. Cavan has been warned by authorities in the past that the fact that the doors are open and a small number of parishioners can attend Mass is against Covid-19 regulation. This is despite the fact that some legal experts have insisted that religious gatherings are not illegal.

Now, The Irish Catholic understands that the gardaí have ratcheted things up and fined Fr Hughes €500. Fr Hughes previously revealed that a garda had told him: “this is your final warning”.

Sources close to the Co. Cavan-based priest have told this newspaper that he is determined not pay the fine and is prepared to go to jail if necessary.

Chai actually undersells it a bit by saying that “some legal experts” have insisted that religious gatherings are not illegal. While it’s true that leading legal experts, including the former head of the TCD law school, Oran Doyle, have stated categorically that holding a mass is not a crime, there’s actually no need to rely on experts at all. We can just listen to what the Department of Justice told the media in November. Here’s a report from the Journal from last November:

THE DEPARTMENT OF Health has said that priests cannot be criminally sanctioned for holding a public mass while Covid-19 regulations are in place.

With mass limited to taking place online under Levels 3, 4 and 5 of Ireland’s coronavirus measures, the prospect of priests being fined or imprisoned for holding a service has been the focus of comment online, in the media and even in the Dáil chamber in recent weeks.

However, the Department of Health has confirmed to TheJournal.ie that there is no provision for this in the legislation that underpins the restrictions.

So on the face of it, we have a situation where the Gardai have issued a fine – and threatened somebody with a “final warning” – for doing something that is expressly not illegal.

Now, it might well be true that the Garda in question did not know the law. After all, the Government has done everything within its power to make people believe that the law bans public masses. And indeed, there are some legal restrictions – the limit of ten people at a funeral, for example, has the force of law. But that’s not really an excuse: Gardai are supposed to know the law. If a Garda detains you, for example, he’s supposed to tell you under which act and power he is detaining you. If he’s fining you, even for speeding, he should tell you that he is fining you in accordance with the relevant provisions of the road traffic act, or whatever.

But it’s not just a case of Gardai not knowing the law. There’s also the other, more serious matter, of not knowing it AND applying it inconsistently. Sorry for the repeated extracts from other sources, but they’re sort of necessary. Here’s a little yarn from the Independent, from just last month:

In a statement, gardaí confirmed it was aware of the funeral that took place in Crumlin on Saturday.

“Gardaí attended the scene and engaged with those present. Gardaí also attended a property in Sundrive Park on the night of February 13, following reports of a party in the property. Gardaí discovered a number of people present in breach of current Covid-19 regulations, engaged with those present, and they eventually dispersed,” the statement said.

It added that the Health Act provides certain restrictions on funerals but they are not penal regulations, meaning there would be no penalty for the breach.

The context to that story is that the funeral in question was, apparently, for a hardened and well-known criminal. It’s one thing for the Gardai to toss out a fine to a Priest in Cavan for saying mass. It’s quite another, of course, for them to attempt to fine the kind of people who attend funerals of hardened criminals.

It’s understandable on a human level. But it’s completely inexcusable at a societal level. Either we are all in the same boat, and all playing by the same rules, or we are not. If it looks like the Gardai are just making the laws up as they go along – and it does – then what incentive do any of us have to obey them?

I’ll leave you with this little vignette from the weekend. The lady in question, it later turned out, was arrested for not giving her name and address to the Gardai. So we’re clear: If you are asked for your name and address by the Gardai, just give it to them. They are entitled to ask for it.

That said, does not giving your name and address really require a full squad of men to tackle a young woman, out with her dog at a protest, to the ground?

This is the kind of thing you see in authoritarian dictatorships, not in civilised western societies:

one of the women walking her dog that was part of the march that went from the Phoenix park was arrested by Drew Harris’s men https://t.co/8LspunYAA9 pic.twitter.com/MXIFhHyvTZ

It’s time to make noise about this kind of thing, because Irish society is increasingly being policed, on the direction of our god-awful Government, in an arbitrary, inconsistent, and frankly tyrannical way.

Govt figures: 80% of adults have taken a vaccine