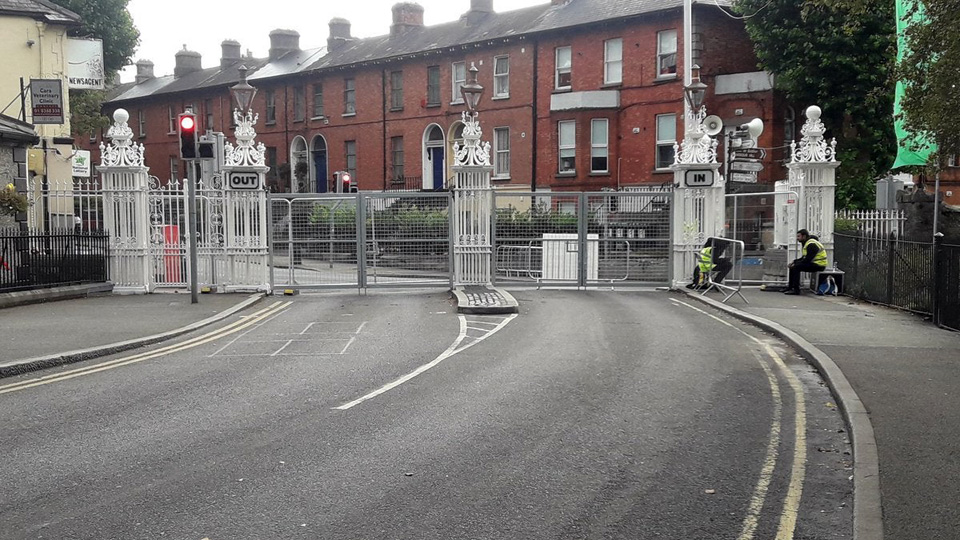 Our dear friends over at the Journal.ie reported yesterday that the Phoenix Park will shortly have its old, ornate gates restored, three years after they were taken down to facilitate the visit of Pope Francis. It’s good news, for sure, but with all the respect in the world to the good people at the Journal, they…. Sort of buried the main story:

A spokeswoman said: “Works on the rehanging of the remaining gates have been paused since the start of 2021 due to current Covid-19 restrictions.

“However, following a reassessment of the required works to repair the gate structures, those works have been deemed to be essential repair and maintenance of infrastructure.

“Planning for the resumption of those works and the rehanging of the gates, as soon as possible, is underway.”

The spokeswoman said costs on the project so far and amounted to around €800,000 and were “still within” the approved budget.

Well, let’s be fair. It may not simply have been a matter of the gates themselves. The “gate structures”, by which they mean the pillars and arches that the gates are hung on, they say, also needed some repair work.

But still. That doesn’t really make much sense, does it? The gates themselves are being restored, not replaced. And not “restored” in the same way a work of art in a gallery would be restored – in those instances, costs can run high because after a few centuries, air itself can start to damage say, a painting. The gates are made of wrought iron. In the worst case scenario, they’ll have rusted away to nothing, and you’d need to replace them with new gates. How much would that cost?

Well, if you want a fancy set of gates for your home, with electric motors, and sensors, and all the bells and whistles, they cost…. A whole lot less than what the state has paid to restore these ones. According to a website for tradesmen, the top of the range electric gate for fancy homes, made out of wrought iron, costs…. Somewhere between €2,000 and €4,000.

Of course, it’s not just one gate into the Phoenix Park. There are a total of six. Outfitting them with the most expensive gates on the market then should cost about €24,000. Let’s be generous and add ten times that amount to fix the pillars and piers as well. You still end up with just over a quarter of the actual cost incurred by the taxpayer to fix these gates.

We emailed the Office of Public Works yesterday to ask for a breakdown of the costs of these eight hundred grand gates, and alas, we’ve had no reply yet.

Unfortunately, there’s no recorded list of the world’s most expensive gates, which is a pity, because one suspects that the Phoenix Park might be near the top of the list. They should really go the extra mile, you know, and put up plaques in solid gold beside each gateway, with the phrase “world’s most expensive gate” on it. It would be a great tourist attraction for the Americans to take selfies with.