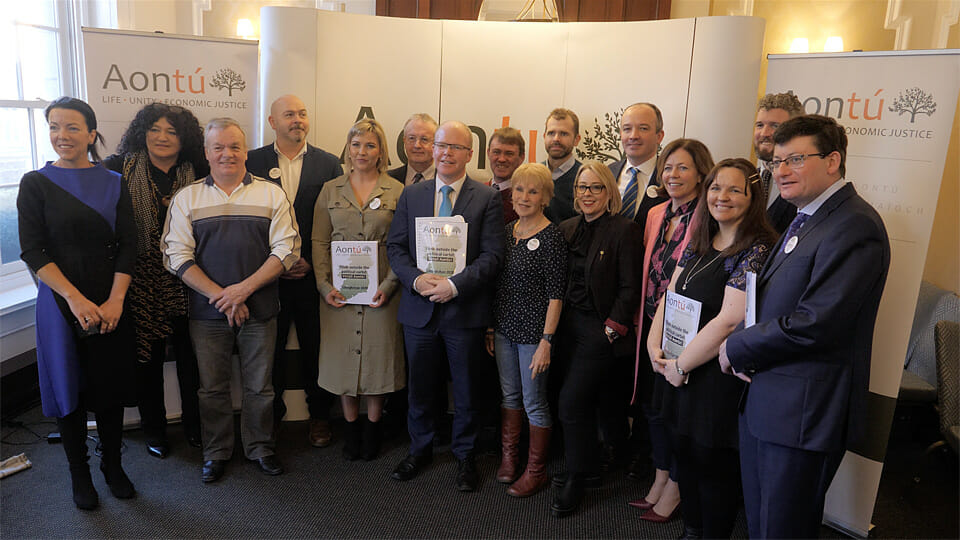 Peadar Tóibín, leader of Aontú, has urged the electorate to “think outside the political cartel” of Fine Gael and Fianna Fáil, and to vote for its 25 candidates on February 8th.

The party is hoping to build on the success of the general election last year, and says that the current government, supported by Fianna Fáil, have “deeply divided” the country.

“The political establishment has run this country for their own vested interests and it’s time the country was run for the citizens,” Deputy Tóibín said at the launch of the party’s manifesto for #Election2020 in Wynn Hotel in Dublin today.

Commentators believe Aontú Cllr Sarah O’Reilly, who topped the poll in the local elections in Cavan, Cllr Jim Codd in Wexford, and Mary T Sweeney in Donegal, are the primary contenders to poll well in the election, along with Deputy Tóibín in Meath West.

Mr Tóibín described the party as a “grass-roots people powered all Ireland movement”, which has gathered  more than 2000 member nationally.

He said that the government was incapable of seeing beyond the M50 and that Ireland was becoming a city state with an overheating capital with the worst congestion in Europe.

“We have a sprawling commuter belt where workers spend three hours a day commuting from as far as Munster, Connacht and Ulster and many parents only see their children at weekends because their daily commute is so long.”

Aontú wants the National Framework Plan used to develop two international cities – one in the north as a balance to Belfast and one on the western seaboard as a balance to Dublin.

Mr Tóibín said Aontú  would seek 10% of the current health budget to be assigned to the development and delivery of primary care in communities, and GPs incentivised to offer a wider range of services and midwife-led care to take increasing pressure off maternal health care hospitals units.

The establishment of an independent “oversight and risk management “team to monitor for systematic problems in the health service was also required, the launch says.