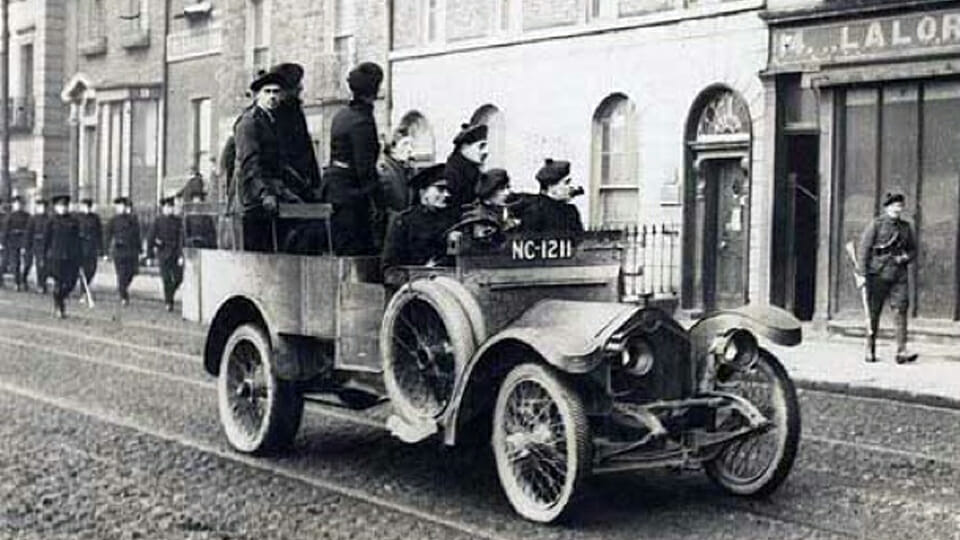 Over 17,000 people have signed a petition in 24 hours as anger grows at government plans to allegedly “commemorate the Black and Tans” as well as the RIC in Dublin Castle later this month.

The controversy arose after a government announcement on January 1st confirmed that an official state commemoration for those who served in the Royal  Irish Constabulary (RIC) would take place in Dublin Castle on January 17th and be addressed by Justice Minister Charlie Flanagan.

The Black and Tans were recruited by the RIC as Temporary Constables during the War of Independence, and were officially known as the Royal Irish Constabulary Special Reserve – a force established in 1919 by Winston Churchill, then the British Secretary of State for War.

They quickly earned a reputation for violence and brutality, taking part in atrocities such as Bloody Sunday, the horrific torture and murder of the two Loughnane brothers in Galway, and the burning of Ballbriggan and Cork.

The RIC were also considered a repressive force, ensuring forced evictions in the 19th century, and attacking, and in some occasions beating to death, citizens during the 1913 Lockout.

Aontú leader Peadar Tóibín called on the government to cancel the event.

“The front line of Britain’s war on Irish freedom and the Irish Republic was its colonial police forces, the Royal Irish Constabulary and the Dublin Metropolitan Police,” he said.

“The notorious Black and Tans and the brutal Auxiliaries were part and parcel of the RIC’s machinery. They operated as the RIC. The Minister for Justice has claimed to have a duty to all police officers. That is patently nonsense. No Irish minister has a duty to the police forces of an imperial power,” the Meath West Deputy said.

“With the establishment of Dáil Éireann in 1919, the RIC, the DMP and their partners in the British Army had no right to violently undermine the Irish Republic and Irish democracy. Not only did those organisations refuse to recognise our right to self-determination, they went to war with the Irish people. There is no good reason for why the Irish state and Irish state bodies should honour the organisations that were to the fore in upholding British colonial rule in Ireland. If the government has any respect for the basic right of the Irish people to be free and to have legitimately pursued our freedom, it will cancel the planned RIC/Black and Tan commemoration in Dublin Castle,” said Deputy Tóibín.

The Mayor of Clare, Cathal Crowe described the commemoration of the RIC as” historical revisionism gone too far.”

He wrote on his Facebook page that it was “wrong to celebrate and eulogise (I consider “commemorate” to be a verb with positive connotations) an organisation that was the strong-arm of the British state in Ireland. The RIC joined army and auxiliaries (Black & Tans) in search parties and raids that resulted in our country-people being killed / tortured or having their homes torched.”

The Clare Mayor said he would be boycotting the event despite an invitation from the Minister for Justice to attend.

Black and Tans beat up my grandfather, who was a tailor, they broke his scissors, the tools of his trade, and smashed his rosary beads on the ground, that he always carried with him. They also terrified my grandmother, entering her house while she was pregnant. #blackandtans

Honouring the Black and Tans in January will be a huge insult to Irish senior citizens who would have been told at first hand, of the atrocities committed by this heinous band of gurriers, in every town and village in Ireland
I can still remember the accounts of their atrocities pic.twitter.com/RpWlqTxmaA

If there is to be a commemoration of the RIC and the black and tans then I think there should be a special section dedicated to then role the RIC played during the Famine. They played a vital role in ensuring the Irish didn't cause too much trouble while starving to death. pic.twitter.com/hym4Cwn4Jj

"Fine Gael" plans to commemorate the Black and Tans is step too far. This is historical revisionism at its worst. There is a process underway of rewriting the history of our nation.

Almost 17,000 people have already signed a petition opposing the commemoration.

However, Minister Charlie Flanagan  told the Irish Times, he did not wish to ignore the RIC or “be partisan”.

“I believe I have a duty as Minister for Justice to police officers,” he said.

A thoughtful piece here from @RMcGreevy130, grateful to @CharlieFlanaganfor pushing this & for inviting me to this worthwhile commemoration. https://t.co/LaIh95mNtz