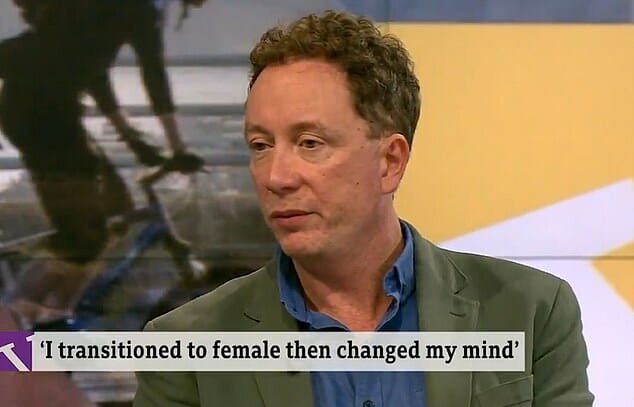 Criminologist Richard Hoskins (56) has said he would have been saved from gender transitioning if he had been given adequate therapy to deal with his traumatic past.

Hoskin, who had surgery to remove his testicles in Thailand and changed his name to “Rachel”, was sexually abused as a child and later lost three of his own children.

He says these traumas were at the root of his gender dysphoria, and that the three counselling sessions he had prior to surgery were not enough to tackle those underlying causes.

Having since detransitioned back to Richard, Hoskin told the BBC’s Victoria Derbyshire yesterday: “For the sake of the nation’s sanity, we first need to explore if something else is going on before people transition.”

Hoskin was referred to a consultant in the Gender Identity Clinic (GIC) within two weeks of seeing his GP, an usually fast turnaround that he attributes to the fact he was already recklessly self-prescribing hormones and appeared “very convincing” due to his education and research.

Upon his return from Thailand, the NHS offered Hoskin vaginoplasty, an operation that would construct a vagina from his penis.

Hoskin however had visited a gender psychotherapist a month earlier, causing him to reassess the path he had chosen.

“I went to see a gender psychotherapist and she said to me, what pain are you carrying? It was a life-changing, jaw dropping moment.”

Mr. Hoskin says his childhood was “ripped apart” after his teacher was found guilty of sexual abuse, but things got even worse when he was working in Africa and his twins became ill and died. His first marriage to the twin’s mother ended shortly after.

His 19-year-old son was then electrocuted in 2009 and eventually died from the burns after 42 days, by which time his second marriage had also broken down over the tragedy of turning off his son’s life support.

Hoskin says the three counselling sessions with the NHS only concentrated on his gender dysphoria, a focus he claims is too narrow.

“They are only focused on the gender issue. They do ask for your back story, but they didn’t address my painful past. All they wanted to talk about was gender dysphoria.”

Admitting he would not have gone through with the life-changing surgery if he had sufficient counselling, Hoskin shared that, although he wasn’t against gender transition, he believes a lot of people transition in an attempt to escape their pain.

“I was escaping my pain and my past. I had gone through extreme trauma, but PTSD switches off the normal ways in which we analyse things…I’m saying, let’s pause the process, let’s slow it down. I have a lot of trans friends who now regret transitioning.”

Explaining to listeners that he regrets the surgery “every day”, Hoskin said the irreversible changes means he is left with breasts, that he can’t feel his skull in certain places, and has no naturally-occurring hormones.

Hoskin says he is lucky to be alive after going “through hell”, but said more needs to be done to help people suffering with gender dysphoria get to the root causes of their pain.

“The highest rate of suicide of any mental health issue is those who believe they have gender dysphoria. That alone should say is it gender dysphoria or is it another issue?”