“A cultural coup”: reactions to Big Tech’s ban on Trump 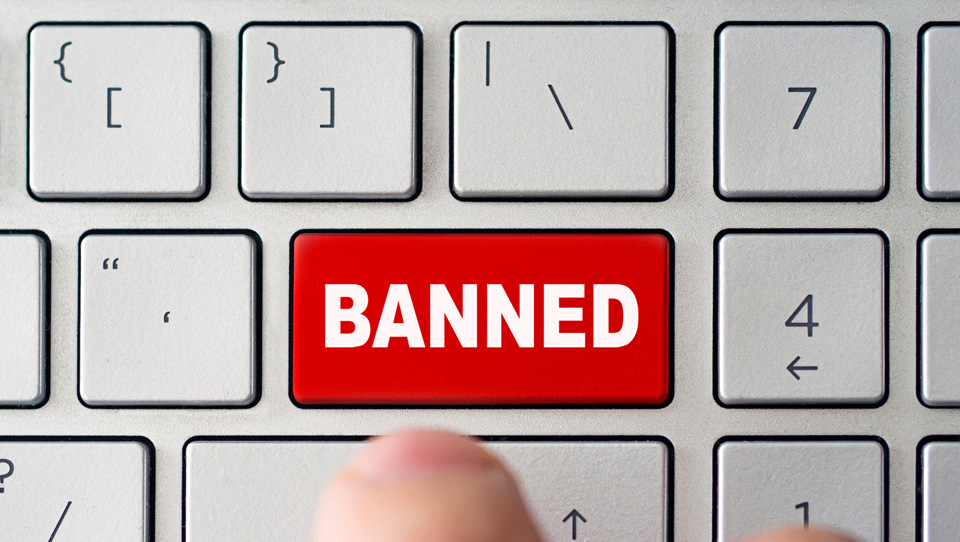 Big Tech – the handful of powerful companies who have a near-monopoly on social media and many avenues of public speech – moved in concert last week to ban or severely restrict Donald Trump from communicating with his followers.

Mr Trump received 74 million votes in the US Presidential election in November, with some 47% of voters supporting the sitting president. His rival, Joe Biden, won the election with 53% of the vote.

After violence in the US Capitol last Wednesday Mr Trump was suspended by Facebook until the end of his term.

Twitter, where the President had amassed some 89 million followers, then said it would enforce a permanent ban – and now Mr Trump faces a ban or serious restrictions on almost every platform including Instagram (owned by Facebook), You Tube (owned by Google), Snapchat, Reddit, Spotify, Twitch, Shopify and Tiktok, the app owned by Chinese company ByteDance.

Trump’s ability to communicate through email or fund-raise has also been impacted with at least one of the email services the Trump campaign used, Campaign Monitor, suspending access. Last night, Stripe, one of the leading payment processors, cut off the Trump campaign.

Parler, a ‘free-speech’ site which some conservatives see as an alternative to Twitter, also came under attack, with Google and Apple banning the app from their stores, despite Parler’s surge to the top of both Google Play and Apple’s download charts after Twitter banned Mr Trump. Parler CEO John Matze posted that the platform had received up to two million new accounts during the period. However, Amazon has now pulled hosting from Parler, effectively ensuring the platform can’t be accessed online.

The muzzling of Mr Trump has been accompanied with what some commentators are calling a “purge” of some hugely popular conservative Facebook pages such as “Walk Away”, which recorded the experiences of thousands of people leaving the Democratic Party in the US, being inexplicably deleted.

The unprecedented Big Tech censorship has been condemned by some political leaders internationally.

Australian Treasurer and Deputy leader of the country’s Liberal Party said: “I feel pretty uncomfortable with those measures which were announced. Freedom of speech is fundamental to our society. As Voltaire said, ‘I might not agree with what you say, but I defend your right to say it’. Those decisions were taken by commercial companies but personally I felt uncomfortable with what they did.”

The Daily Wire reports that Russian opposition leader Alexei Navalny, a strong critic of President Vladimir Putin, slammed Twitter for its censorship of Mr Trump, saying the move was “unacceptable.”

“Of course, during his time in the office, Trump has been writing and saying very irresponsible things. And paid for it by not getting re-elected for a second term,” he said. ““The election is a straightforward and competitive process. You can participate in it, you can appeal against the results, they’re being monitored by millions of people. The ban on Twitter is a decision of people we don’t know in accordance with a procedure we don’t know,” he continued. “In my opinion, the decision to ban Trump was based on emotions and personal political preferences. Don’t tell me he was banned for violating Twitter rules. I get death threats here every day for many years, and Twitter doesn’t ban anyone.”

Left-wing Mexican President Andrés Manuel López Obrador also condemned the ban. “I don’t like anybody being censored or taking away from the right to post a message on Twitter or Face(book). I don’t agree with that, I don’t accept that,” López Obrador said according to the Washington Post. “How can you censor someone: ‘Let’s see, I, as the judge of the Holy Inquisition, will punish you because I think what you’re saying is harmful,’” he continued. “Where is the law, where is the regulation, what are the norms? This is an issue of government, this is not an issue for private companies.”

But the Chinese Communist Party welcomed the censorship of Mr Trump, saying it showed the need to curtail free speech, an action now synonymous with the Chinese government. It’s state affiliated media said the suspension of his Twitter account showed “freedom of speech does have boundary in every society”. 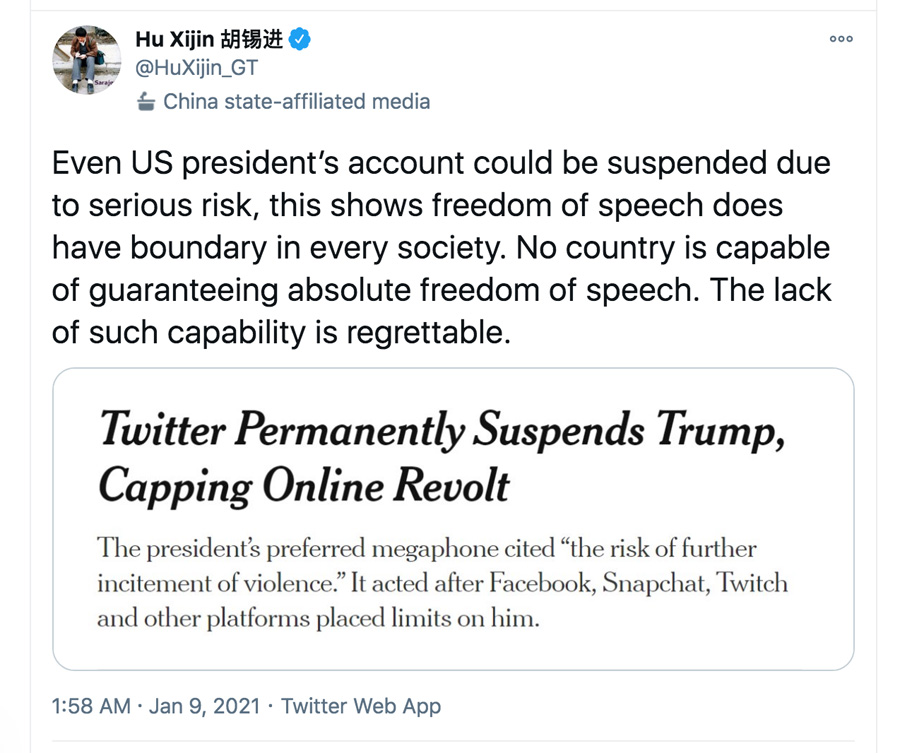 The Economist noted that mega-corporations like Apple and Google act as “gatekeepers to every smart-phone on the planet” and said that disquiet about the power and reach of Big Tech “is not confined to political partisans”. It also pointed out that “critics of Twitter’s decision lost little time pointing out that the firm is apparently happy to continue to host Ali Khamenei, Iran’s Supreme Leader.”

US Senator Lindsay Graham called out to Twitter: “Your decision to permanently ban President Trump is a serious mistake. The Ayatollah can tweet, but Trump can’t. Says a lot about the people who run Twitter. ”

Twitter may ban me for this but I willingly accept that fate: Your decision to permanently ban President Trump is a serious mistake.

“At a stroke, unaccountable billionaire capitalists have decided to deprive a democratically elected president – the leader of the free world, no less – access to a large part of what now constitutes the public square,” he wrote in a piece entitled ‘Big Tech has become a tyranny’.

Analyst John Robb said that the ban pointed to one thing.  “The corporations are running the country now.”

Agree or disagree with the decision, this points to one thing.

The corporations are running the country now. pic.twitter.com/r2EPGXck7Y

“The speed at which the US has fallen to corporate authoritarianism has been astounding.  At this rate, we’ll be less free than China by the end of the month,” he also tweeted.

Former editor of the Financial Times Lionel Barber posited that the move had settled a long running argument: “The Trump Twitter ban and Facebook’s belated clampdown finally settles it: platforms are publishers, with all the responsibilities that come along with that privilege

The Trump Twitter ban and Facebook’s belated clampdown finally settles it: platforms are publishers, with all the responsibilities that come along with that privilege

Most other Irish media platforms failed to address the free speech issues raised by the Big Tech companies acting together to silence a sitting President.

On social media, however, commentators like Robert Burke pointed out that the Big Tech ban was co-ordinated and an attack on free speech.

Mainstream journalists are celebrating the banning of the current President of the United States, Big Tech purging his supporters and websites dedicated to free speech. They know it’s all coordinated and they don’t care.

Don’t you dare call them the enemy of the people though.

He also slammed Irish journalists for failing to stand up to tech censorship.

How many Irish journalists have broken ranks and condemned the tech censorship? Is there one? https://t.co/aiRN8IsxLH

Its a cultural coup

Mary Lou should Remember the Power of an Apology