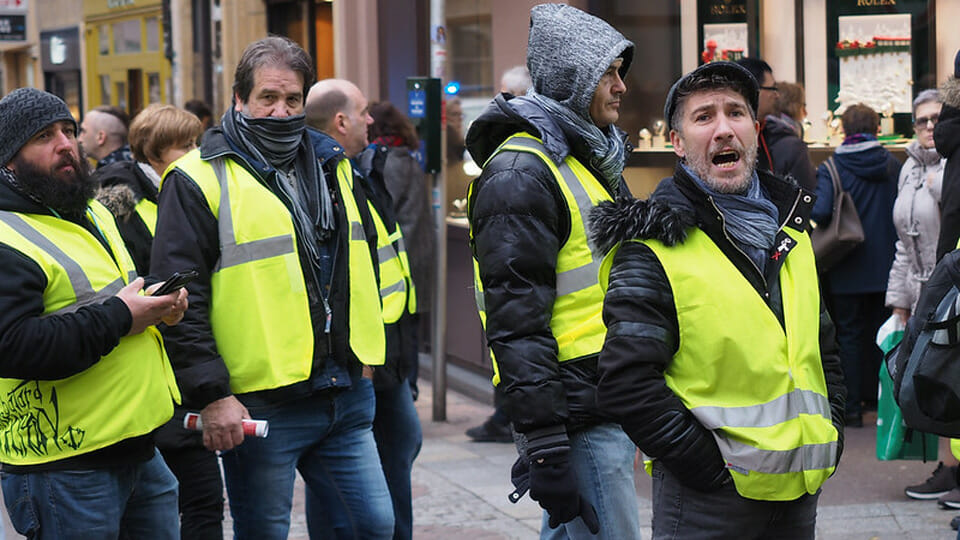 The French protest movement known as the Yellow Vests or Gillet Jaune are now demonstrating for a year – with 52 weeks of protest racked up this weekend.

Mainstream media will not show you this video. You are the media now.pic.twitter.com/nz3Xvw4jFs

The French Yellow Vest protesters originally took to the streets to oppose rising fuel costs and the high costs of living took to the streets in 2018. They have repeatedly decried Emmanuel Macron’s government as caring only for the rich and called for action on rising inequality.

Bloomberg says  that new data shows the Yellow Vests have a point.

An estimate from national statistics office Insee shows inequality, as measured by the so-called Gini coefficient, last year registered its sharpest increase since 2010.

Le Monde reports that the French police have detained more than 10,000 supporters of the movement since its inception in November 2018.

Two French police officers will now stand trial for alleged violence against the Gillet Jaune protesters at this year’s May Day protest in Paris.

Demonstrators have repeatedly accused the government of directing police and military to use heavy-handed tactics that have left at least 23 people seriously injured. Police counter that they have also been targeted with violence, and that morale in the force as a result of the strain of dealing with a year of repeated demonstrations is at an all time low.