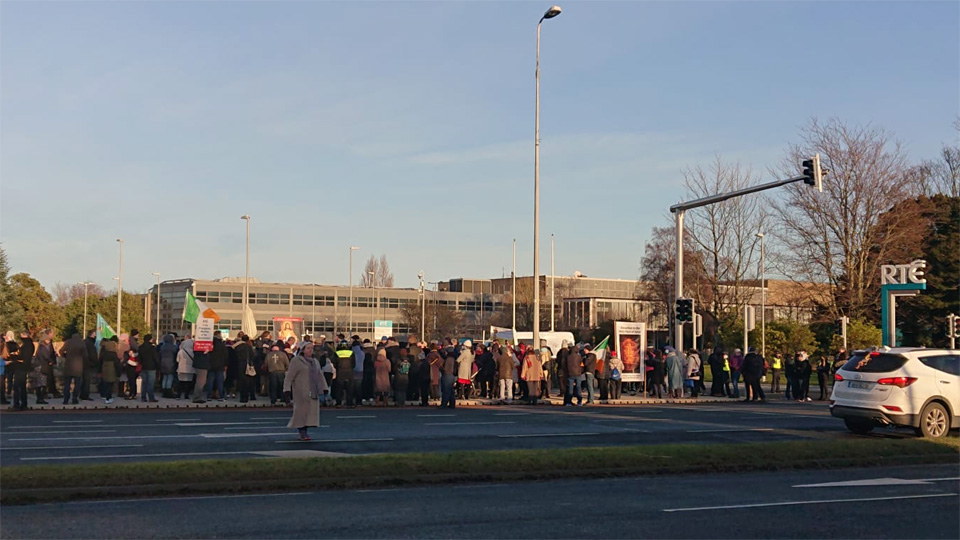 Up to 200 people have attended a protest and prayer vigil at RTÉ studios in Donnybrook, in what they describe as “an act of public reparation” for the New Years’ Eve sketch which accused God of rape.

Participants prayed and held banners displaying the Holy Face of Jesus and signs which accused RTE of failing to respect Christians.

“The vigil was needed as an act of reparation, because it does not matter that  we as Christians might have been offended, but it matters that it [the sketch] is an offence against God himself,” an organiser told Gript. “We want to strongly urge RTE to repent and apologise to God, not us”.

He said that at a time when the country was suffering multiple problems, many people were turning to God for assistance, and RTÉ “should not be mocking Him”.

The protest comes after the state-funded broadcaster was forced to apologise for the sketch, which, it acknowledged, had caused grave offence. RTÉ is understood to have received more than 5,000 complaints from the public on the issue.

Protesters said “RTÉ have stooped to a new low in their latest attack on Catholics/Christians in Ireland.”

“On New Year’s Eve, during the Countdown Show, a comedy sketch was shown, in which God was accused of raping the Virgin Mary.”

“This was a blasphemous attack not only on every Christian in Ireland but also on God and the Blessed Virgin. It was highly offensive, especially during the Holy Season of Christmas as Christians celebrate the birth of Christ,” they said.