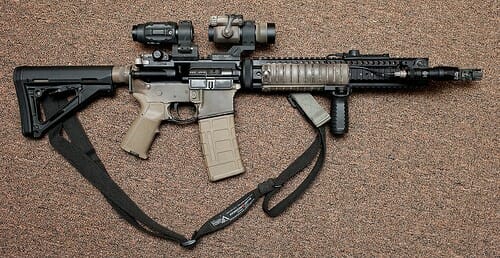 An 11-year-old girl has appeared before a US state committee hearing on gun legislation carrying a loaded AR-15 rifle.

Bailey Nielsen (11), who remained silent throughout, attended the hearing with her grandfather Charles Nielsen to support legislation that would allow visitors to Idaho state to carry concealed handguns with the state’s city limits.

Accompanied by her grandfather, Charles, an 11-year-old girl named Bailey Nielsen carried a loaded AR-15 into the Idaho statehouse.https://t.co/mLq7V1JLlU

“Bailey is carrying a loaded AR-15,” her grandfather told lawmakers. “People live in fear, terrified of that which they do not understand. She’s been shooting since she was 5 years old. She got her first deer with this weapon at 9. She carries it responsibly.”

“She knows how not to put her finger on the trigger. We live in fear in a society that is fed fear on a daily basis,” he added.

Claiming that she can handle weapons responsibly, Mr. Nielsen argued visitors to the state should have the same right.

“When they come to Idaho, they should be able to carry concealed, because they carry responsibly,” Nielsen said. “They’re law-abiding citizens. It’s the criminal we have to worry about.”

The legislation was drafted by a Republican lawmaker who previously defended her daughter using a gun.

“I stand here before you today as a mother and grandmother who has had to use a firearm to defend their child,” Rep. Christy Zito explained. “Even though I didn’t have to pull the trigger (when two men approached her car), just the fact that they could see it, and they knew that I had it, was the determining factor.”

Although untrained Idaho residents without permits are allowed carry concealed handguns within city limits provided they are over the age of 18, visitors to the state, including military personnel are unable to do so.

The legislation, which was opposed by three Democrats on the committee, has now been sent to the full state House for consideration.

Although not a machine gun, the AR-15 has been used in mass shootings in Aurora, Sandy Hook, Las Vegas, Orlando and other locations. It was called “America’s Most Popular Rifle” by the National Rifle Association.

Pedophile Information Exchange (PIE) founder “among the founders of ILGA”

It is fine to boo taking the knee, actually