The plan by The UN Population Fund to host a recent government conference on “sexual and reproductive health” in Kenya backfired as Kenyans fought back attempts to export Western sexual norms into Africa. The UN Nairobi Summit was greeted by pro-life street protests and accusations of neo-colonialism. The Kenyan legislature forbade UNFPA access to the Chamber of Parliament, and Members pledged to amend a foreign NGO law to restrict the promotion of anti-family and anti-life programmes.

Irish Aid was one of the funders of the summit which was attended by leading members of the 2018 repeal campaign including Minister Katherine Zappone, Francis Fitzgerald MEP, Senator Catherine Noone, and Dr. Rhona Mahony. 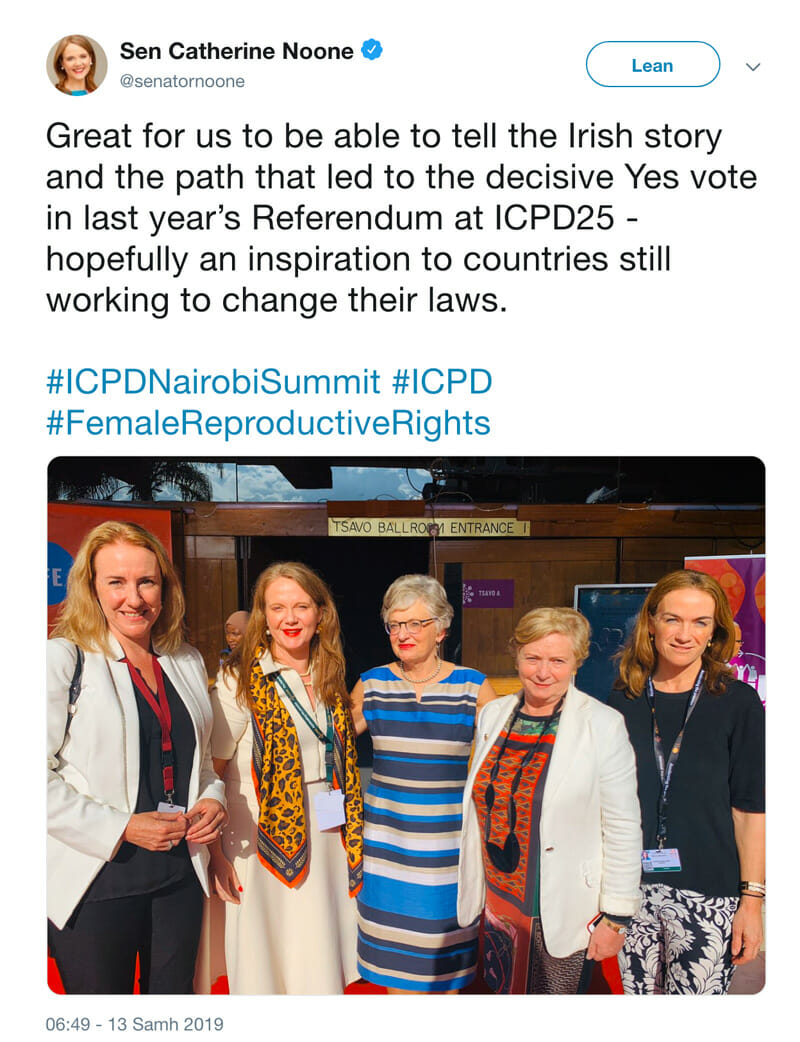 Needing an African backdrop to promote its controversial agenda, UNFPA and Denmark solicited the government of Kenya to host the conference to mark the 25th anniversary of the International Conference on Population and Development (ICPD) held in Cairo in 1994. The Summit was held in an attempt to gather support for a new set of controversial political commitments that had been drafted in consultation with a steering committee consisting of global pro-abortion organisations like International Planned Parenthood Federation, SheDecides, and Women Deliver.

Alongside universally agreed goals like ending maternal death and eliminating female-genital mutilation, the summit agenda included commitments about a “right to abortion” in humanitarian settings, expanding “sexual and reproductive health” to include LGBT rights, and access to sexual and reproductive health services and comprehensive sexuality education for children without parental consent. under the umbrella term of Sexual and Reproductive Health and Rights (SRHR).

Over 80,000 Kenyans signed a petition from CitizenGo protesting the summit which was delivered to President Kenyatta in advance. Many of them staged protests in the streets and remained outside the conference as it was being held.

Desperate to control the narrative coming out of the Summit, and to limit criticism, the organisers blocked pro-life groups from attending. When several Kenyan pro-life organisations were barred from attending they held a parallel conference at the Catholic University of East Africa to provide a different perspective on the topics addressed within UN conferences. Organisations from Europe, Mexico, and United States that were denied summit accreditation accepted invitations to participate in the alternative conference.

“Africa is not for sale. African women do not need to sacrifice their children to be empowered” said Anne Kioko, Campaign Director for CitizenGo Africa.

“We will not take wholescale everything that comes with the conference. We will end what we think discriminates against our fellow citizens but reject totally what is against our culture and morals,” said President Kenyatta of Kenya about the Nairobi Summit.

The United States and 10 nations issued a stinging rebuke to the Summit by declaring that any document the conference issued is illegitimate. The joint statement presented on the last day of the summit by the U.S. Department of Health and Human Services (HHS) Office of Global Affairs on behalf of Brazil, Belarus, Egypt, Haiti, Hungary, Libya, Poland, Senegal, St. Lucia, and Uganda reaffirmed that “there is no international right to abortion.”

“Everyone has the right to life (e.g. Article 3 of the Universal Declaration of Human Rights,” the 11 signatory nations asserted.

Stefano Gennarini of the Center for Family and Human Rights (C-Fam), which lobbies at the U.N, noted that “The conference was organised secretly. Governments were selectively consulted about the outcome. Those with pro-life concerns were kept in the dark about how to participate. Pro-life organisations that are accredited with the UN were denied access to the conference.”

The signatory nations to the U.S. HHS statement brought these criticisms right to the conference floor stating: “We would have appreciated more transparency and inclusiveness in the preparation of the Conference, including regarding criteria for civil society participation. Only a small handful of governments were consulted on the planning and modalities. Any outcomes from this summit are not inter-governmentally negotiated, nor will they have been the result of a consensus process. As a result, they should not be considered normative, nor should they appear in future documents as inter-governmentally-agreed language.” The 11 signatory nations stated that they “cannot support a sex education that fails to adequately engage parents and which promotes abortion as a method of family planning.”

The Holy See withdrew from the summit stating that it “cannot support the Nairobi Statement on ICPD25: Accelerating the Promise. It regrets that no substantive and substantial consultations on the text were carried out. It is also regrettable that the conference will be held outside of the United Nations framework, thus, precluding transparent inter-governmental negotiations while conveying the misleading impression of ‘consensus’ on the ‘Nairobi Statement.’ Therefore, ‘The Nairobi Summit’ cannot be deemed a meeting requested by the United Nations or held under its auspices.”

What a spectacular back-firing for the UN, Canada and European Governments which are pushing liberal abortion globally and trying to impose it on African countries. Ireland’s overseas’ aid policy now explicitly promotes and funds abortion.

The Irish Embassy in Nairobi was involved in staging the UN summit, and the Irish Ambassador, Fionnuala Quinlan, appeared on social media with above mentioned from the Yes Campaign. On 12 November the embassy tweeted: 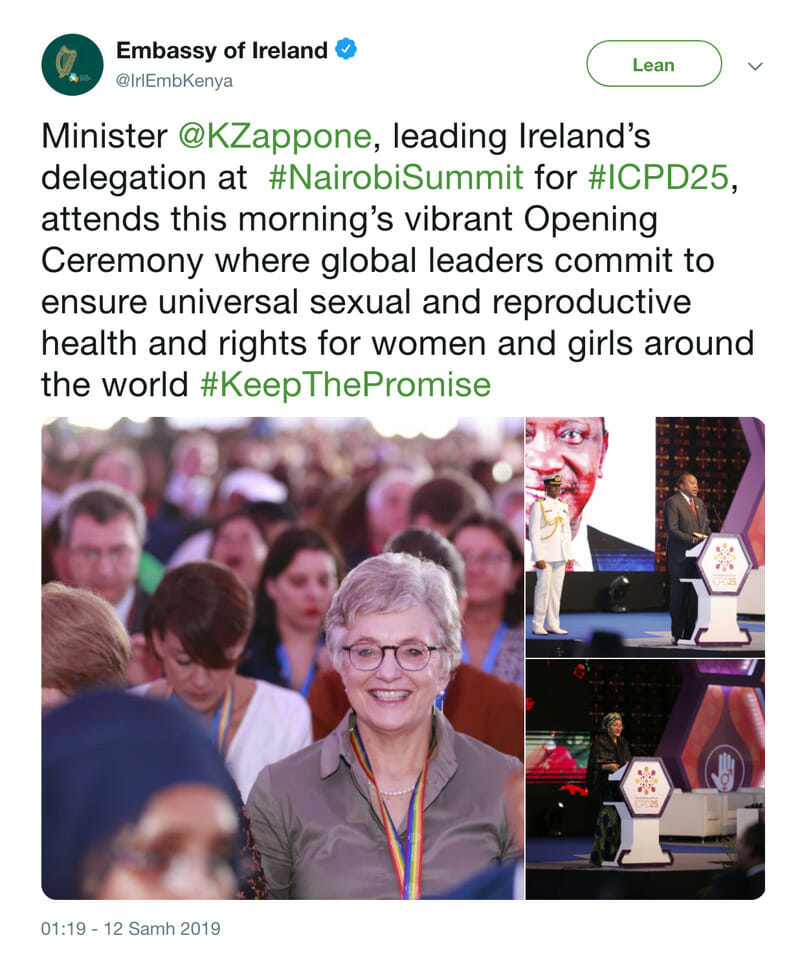 That was no surprise, but then Misean Cara in Dublin retweeted that tweet on 15 November. Misean Cara is comprised of religious congregations. It is funded by Irish Aid to the tune of €15.5m annually. Its purpose is to distribute Irish taxpayers’ money to Irish missionaries undertaking development and humanitarian projects in developing countries. Its board of directors includes a number of priests and nuns. Notwithstanding usual disclaimers, it is very disappointing to see such a Catholic agency supporting an event that advocated for policies that are clearly contrary to Catholic teaching and traditional family values, and which became so controversial because of the manner in which it was organised and staged in Africa. We wonder do the Irish Bishops Conference or AMRI agree with the endorsement of anti-Catholic practices by Irish religious congregations? Bishops’ Conferences in African countries are unlikely to be happy if Irish missionaries go down the road of promoting or funding abortion in their dioceses irrespective of the source of the funding for it.

A news piece about the tweet was published in the Irish Catholic on morning of 20 November in which Misean Cara appeared to stand over its position, but within a few hours of that newspaper being on newsstands, the retweet was deleted from the Misean Cara twitter account.

Ireland has been locked down for longer than any other country in Europe. Did it work?

Should the state just pay the HSE hackers their ransom?