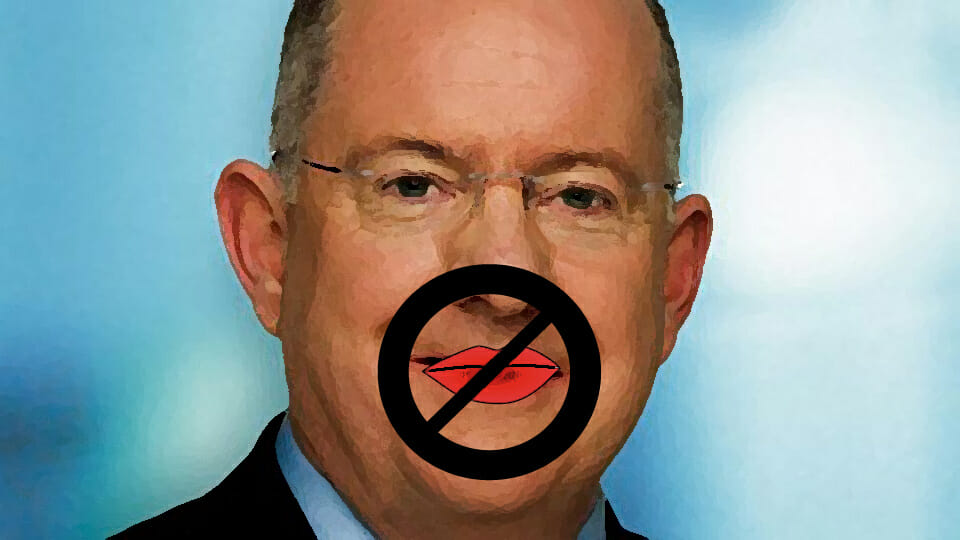 When someone declares we need new laws to restrict and curtail “hateful” opinions, the absolute least that person can do is make sure their own track record is squeaky-clean.

Fine Gael’s Justice Minister, Charlie Flanagan, has been doing the rounds in recent months, insisting that Ireland should expand its current definition of “hate speech”. However, when asked for specifics on what these new definitions might entail, his answers have been vague at best (and outright ominous at worst).

This begs the question: considering the nebulous nature of this proposed legislation, could Charlie Flanagan himself be found guilty of “hate speech” under his own laws?

In March 2014, for example, he tweeted: “Not sure I like the term ‘New Irish’. The Irish who built UK cities & roads over the years weren’t ‘New Brits’. Not now, not ever!”

Not sure I like the term 'New Irish'. The Irish who built UK cities & roads over the years werent 'New Brits'. Not now not ever !

This statement could easily be interpreted in a variety of different ways. Charlie seems to be saying that just because an immigrant arrives in a new country from abroad doesn’t make them a part of the nation, and that so-called “New Irish” are not really Irish – “not now, not ever”.

If anyone else in public life said something like that, would we not expect them to be hammered for weeks over their “racist” comments? Would they not be accused of “hate” and called on to step down from whatever position they were in?

But this is the problem with so-called “hate speech” laws – it’s all totally subjective.

There’s more. In January of 2013, Charlie tweeted that Israel was the only country in the Middle East “with full religious freedom, gay rights, equality for women and political dissent.” As an amusing side-note, he also sent a jab at Trocáire, who seem to be in favour of Flanagan’s legislation, when they opposed a free speech rally in Dublin last week. It seems Trocáire’s love for Charlie might not be mutual.

Regardless, Flanagan’s statement could very easily be interpreted as “hateful” by some overly-sensitive legislator. No doubt if some independent TD stood up in the Dáil to speak about the curtailment of religious freedom and women’s rights in Muslim countries in the region, they would be criticised as “Islamophobes” and “bigots” by the mainstream press, and by their colleagues in Leinster House – maybe even by Charlie himself. Who is to say that if we were to pass laws curtailing “prejudiced” opinions, that views like this held by Flanagan would not find him on the wrong side of his own law?

But it doesn’t end there. In June of the same year, a motion was passed by Cork City Council to recognise travellers as a distinct ethnic group. Flanagan quickly responded to this on Twitter, saying it was “misguided and unnecessary.” When asked for clarification of what he meant, Flanagan replied that travellers were “Irish like anyone else”, and that there should be “one law for all”.

@Eoin_Dineen travellers Irish same as the rest of us. We need integration not fragmentation. This is a Republic. One law for all.

This is very interesting, because if we cast our minds back to last year, this is the opinion that 2018 presidential candidate Peter Casey was first pilloried for by the media and political classes alike.

Casey rejected the idea that Travellers were ethnically distinct from the Irish population. He said, among other things: “That’s a load of nonsense. They are not from Romany or whatever.”

In the debate following these remarks, David Joyce of the Irish Human Rights and Equality Commission said: “I don’t think any presidential campaign in the past has ever stooped to this level of blatant racism.” Shane O’Curry, director of the European Network Against Racism, said “It betrays a gross misunderstanding of what it is to be an ethnic minority, as well as a gross misunderstanding of what life is like in Ireland for ethnic minorities.”

In fact, shortly after the comments, during a demonstration against Casey in the Garden of Remembrance, protest organisers said that Casey’s words were tantamount to “hate speech” and called for stronger legislation on the issue.

Now its true that many Travellers, perhaps fairly, took gross exception to statements made during the campaign, dubbing them “racist” and “ignorant”. Yet not long ago, Charlie Flanagan was on Twitter expressing support for the same basic premise that sparked the controversy in the first place; namely that new legislation should not recognise Travellers as an ethic minority. If Flanagan had made those comments today, would he too be facing accusations of hate speech? And might he be in the future, if his legislation is passed?

Even a cursory search of Flanagan’s twitter account (which really is the gift that keeps on giving) shows how easy it is for him to be hoisted on his own petard and snared up in the preposterous world he’s created for himself.

No matter how PC you are, there’s always someone a little bit more sensitive than you are breathing down your neck, ready to tear you to shreds when that one edgy tweet surfaces, or they interpret a joke wrong. The end result is an inevitable cannibalistic purity-spiral of people picking each other’s words apart forensically for perceived micro-aggressions, and trying to get each other locked up over minor disagreements.

Charlie ‘Ploughing Championships’ Flanagan once said: “Politicians parading as victims of abuse in the face of harsh criticism by angry public is not a good policy.”

Politicians parading as victims of abuse in the face of harsh criticism by angry public is not a good policy.

Maybe he should take his own advice. I don’t want to see Charlie prosecuted for his opinions or old tweets, but I don’t want him to try and prosecute me for mine either. So maybe we should all agree to debate these issues like adults, and not resort to employing the violent force of the State to settle our differences.