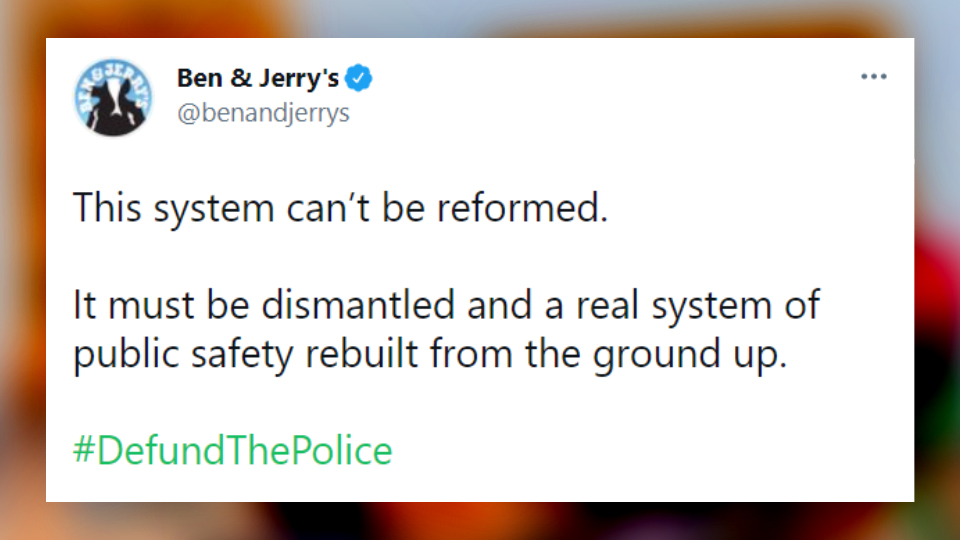 Ice cream company Ben & Jerry’s has called to “defund the police” & “dismantle” the justice system in a bizarre tweet following the fatal shooting of a young black man by a US police officer.

“The murder of Daunte Wright is rooted in white supremacy and results from the intentional criminalization of Black and Brown communities,” the company said.

“This system can’t be reformed. It must be dismantled and a real system of public safety rebuilt from the ground up. #DefundThePolice”

The murder of #DaunteWright is rooted in white supremacy and results from the intentional criminalization of Black and Brown communities.

This system can’t be reformed.

It must be dismantled and a real system of public safety rebuilt from the ground up.#DefundThePolice

However, some Twitter users were quick to point out a recent incident where a black suspect was arrested for burglarising a Ben & Jerry’s store in Burlington, Vermont.

“This you?,” tweeted one user, with a link to the story.

“You called the cops and pressed charges against this individual,” said another.

You called the cops and pressed charges against this individual. https://t.co/DYQSvRrMNj

“One more company that I will not be giving my money to,” said one individual, in a tweet with 1.4k likes.

Last week, 20-year-old Daunte Wright was shot and killed by Minnesota police woman Kim Potter after he resisted arrest following a traffic violation. It is believed that the shooting was unintentional, and that Potter had intended to reach for her taser gun but grabbed her firearm by mistake.

Wright, who was pulled over for a traffic violation, was found by police to have an open warrant for his arrest for robbing and choking a woman at gunpoint in late 2019.

Daunte Wright 'choked woman and tried to steal $820 from her at gunpoint,' court docs show https://t.co/yt2t0SxOKQ

When police attempted to arrest him, Wright resisted arrest, getting back into his car.

In bodycam footage of the incident, the officer can be heard saying “taser!” repeatedly, which is what US police are trained to do before deploying less lethal weapons. However, Potter then suddenly discharges her pistol, shooting Wright, and she can be heard saying “Oh sh**” when she appears to realise what she has done. Wright died of his wounds.

The officer has since resigned from the police force and has been charged with second-degree manslaughter, which carries a maximum prison sentence of 10 years.

Since the shooting, there have been nights of BLM riots, with multiple instances of burnings and lootings across Minnesota.

The Brooklyn Center Walmart in Minnesota was broken into and looted in response to the BLM race rioting overnight after police shot dead a suspected gang member who was trying to escape a warrant arrest. #DaunteWright #Minneapolis pic.twitter.com/2s2At0sEFn