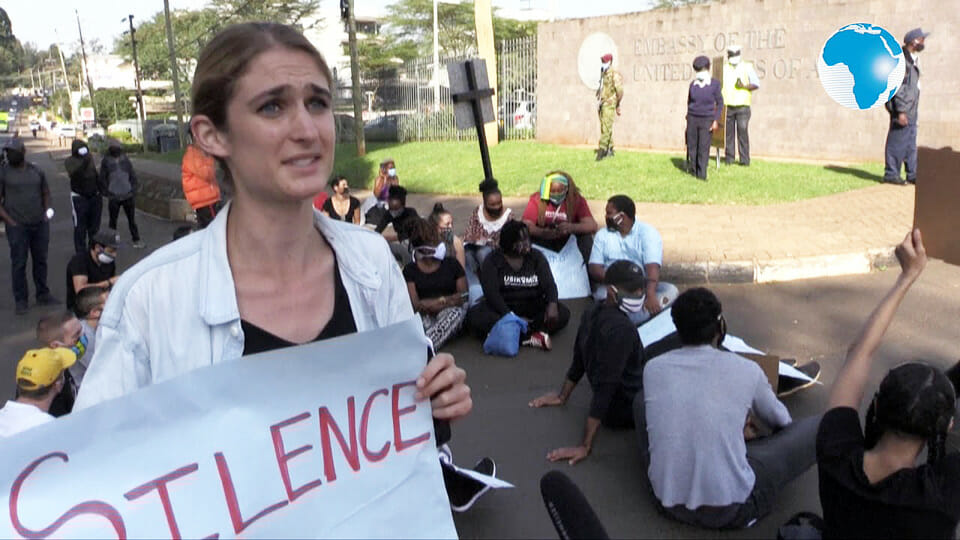 A #BlackLivesMatter protester at the US Embassy in Nairobi

‘Sizeable’, according to the Concise Oxford dictionary, means ‘of large size’ — several hundred people perhaps. Not according to the photo or the news story on the back page of the Kenyan Daily Nation the following day — even allowing for social distancing — which just mentioned a ‘number of protesters’. They looked very much like the multi-racial student protesters in any Western capital, not the average Kenyan.

Not only that: this ‘sizeable’ crowd, ‘comprising both Kenyan and United States nationals, was also there to seek ‘accountability from the US Embassy in law enforcement both in the country and abroad’. The statement they presented to Kyle McCarter, the ambassador, accused the embassy of also being ‘complicit in the loss of lives of Kenyans through extra-judicial killings by the Kenyan police, a force funded and supported by the United States’.

Whether by chance or design, the rest of this page was occupied by the report of an instance of local police brutality: the killing of a homeless man, James Waitheru, ‘a cart-puller with no known relatives’ in the Mathare slums who hadn’t observed the dusk-to-dawn curfew on his way ‘home’ to some gutter to spend the night.

In an op-ed on police brutality on June 8 (Daily Nation), Kaltum D. Guyo, a legal researcher, puts things into perspective squarely. She criticizes the ‘hypocrisy’ of Kenyan leaders who claimed to be enraged by the killing of George Floyd in the US when ‘police brutality has been our way of life’. Her criticism only gets stronger when she accuses Kenyan police of carrying on ‘extra-judicial killings unabated, demanding bribes and locking up people for flimsy excuses. She condemns them for being ‘not only police, but prosecutor and judge too’.

Though late in the day, but in all fairness, the law-and-order top brass have now convened a meeting with 20 human rights groups to address the matter.

At the same time that we were reading her article, a protest march was going on in the Mathare slum: a truly sizeable crowd of some 200 people walked from Mathare to a nearby working-class estate, Huruma. On their way, they knelt at every spot where a life had been taken by the police and chanted slogans against police killings.

One of the protesters, two of whose sons had been killed on their way home three years ago, said that every family there bore the loss of either children or relatives at the hands of the police.

The press photo showed people, most without masks and quite oblivious of social distancing, carrying placards bearing slogans such as ‘Kenyan lives matter’, ‘Stop killer cops’ and ‘Decriminalise poverty’. Some months ago, incidentally, banners had been draped across footbridges over highways leaving the city demanding to know why justice is only for the rich, and why the prisons are only for the poor.

These are the daily concerns of the hundreds of thousands of Kenyans living in and around the slums of Nairobi. This explains why although the average Kenyan feels for the death of George Floyd, they have more to cope with every day than to rush off and join the Kenyans and Americans in the leafy outskirts of Nairobi where the US embassy is safely located.

They too have George Floyd experiences, right on their own doorstep, away from the cameras of the international media. Perhaps, too, this is why the ‘crowd’ at the embassy was only ‘sizeable’.

Martyn Drakard is a retired teacher of languages who lives in Kenya, his article is reprinted here with permission