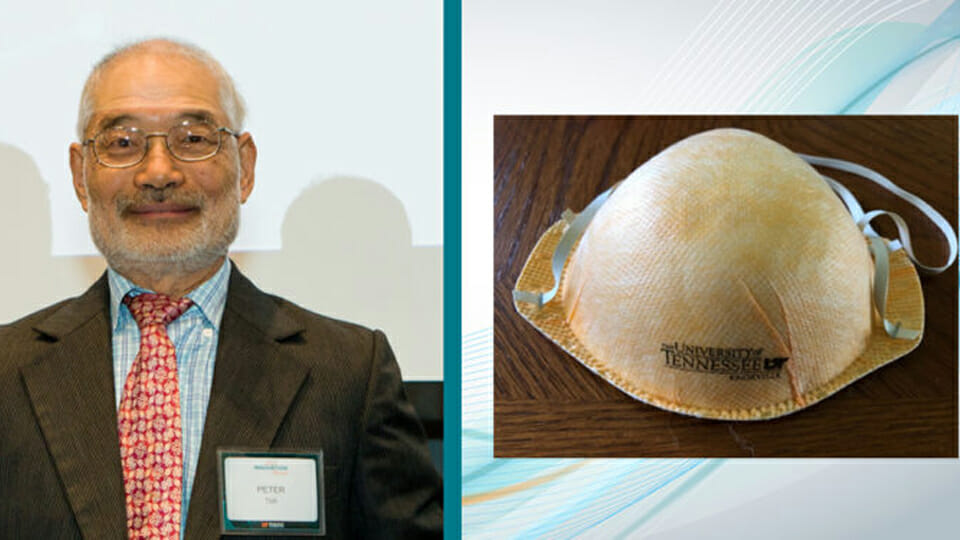 Every now and then, and especially in distressed times such as these, it’s good to spotlight an engineer who has done the right thing, and keeps doing the right thing. Today I’m going to do that with Peter P. Tsai, who is credited with inventing the electrostatic non-woven filter used in the N95-type disposable masks that are such a hot topic nowadays.

In 1995, Prof. Tsai was a materials scientist working at the University of Tennessee in the area of non-woven filter materials. Air filters have been used for many decades to separate undesirable particles from air. If the particles to filter out were large, almost any finely woven material whose openings between the threads were smaller than the particles could catch them. But many of the most objectionable particles, such as tiny smoke particles and virus particles, are smaller than one micron, which is one millionth of a meter. Just to give you an idea, a human hair is about 25 microns or more in diameter. So we are talking very, very small.

It’s almost mechanically impossible to weave cloth with fibers that are smaller than human hairs, so filter designers looked around and discovered that a mat or mesh of non-woven fibers was more effective than any woven fiber could be. The tortuous pathways a particle has to take through the random labyrinth of a non-woven mat of fibers makes it more likely that the particle will get caught somewhere before it makes its way through the filter.

But even with non-woven materials, there was a trade-off between effectiveness and how hard it was to get air to go through the filter. The thicker a filter is, the more likely it is to catch particles, but the harder it is to get air to go through it. This problem can be fixed by making the area of the filter wider, and that is done in stationary systems such as air conditioners. But you can’t attach a portable mask to a foot-square air conditioning filter. So there was a quandary and it looked like there weren’t a lot of new ideas to make small filter masks more effective for very small particles like viruses.

At this point Prof. Tsai, and others preceding him, took a hint from the industrial filter technology known as electrostatic precipitation. Electrostatic precipitators use high electric fields to charge dust particles and attract them to highly-charged wire grids, where they are trapped and disposed of. They work well, but they are huge structures attached to factory chimneys and require high-voltage power supplies.

Prior to Prof. Tsai’s work, others had thought of the idea of making the plastic fibers in a non-woven filter electrified through a process known as hot charging. When the fibers were still in a halfway-liquid form right after they are spun from a melt, it is easy to put an electric field on them that “freezes” into the plastic. But the charging-while-hot process was tricky and probably expensive.

Prof. Tsai’s innovationwas to find a way to take a cold pre-fabricated mat of non-woven material and subject it to two electric discharges of opposite polarity, one after the other. Under the right conditions, this process embedded quasi-permanent electric charges into the plastic fibers and made them very attractive to even sub-micron particles, like the 100-nanometer-diameter SARS-CoV-2 virus that causes COVID-19. The charge is durable and will persist even if the masks are sterilized with steam, according to a new article that Prof. Tsai just put up ona University of Tennessee website.

After a career in which he obtained 12 patents and many commercial licensing agreements for his university, Prof. Tsai retired recently, but he came out of retirement to write the article I referred to, which tells health care workers how to reuse scarce N95 masks and what methods will and won’t work to sterilize them without spoiling their electrostatic properties. Another article about his work estimates that over a billion people have benefited from using masks that employ his invention of cold-charging nonwoven fibers.

Humility is not something that today’s culture looks upon favorably. The media that get the most attention these days are constantly highlighting people who use institutions as platforms to further their own fame and glory. Even some engineering and science types (Elon Musk comes to mind) go this route and strive for public recognition, fame, and the perks that go along with these things.

Peter Tsai is not a limelight kind of guy. A brief biography of him on the University of Tennessee website points out that he has had many opportunities to take more prominent positions, but he has stuck to his laboratory and continued to produce inventions right up to his retirement. I don’t know this for a fact, but it’s quite possible that Prof. Tsai is an introvert—someone who is more comfortable working alone or with a small group of carefully chosen colleagues than he is speaking to a huge crowd at a conference, for example.

As Susan Cain points out in a book of hers I’ve begun to read (Quiet: The Power of Introverts in a World That Can’t Stop Talking), much of American society is set up to favor the talkative, sociable extrovert and to view the introvert as weird or sad or even anti-social. But introverts can do things that other kinds of people have trouble with—for instance, studying a dull materials-science problem for years until insights and hard work pay off with an innovative technique such as cold-charging nonwoven fibers.

For two or three decades now, academia in general and engineering in particular has emphasized teamwork almost to the exclusion of allowing people to do work on their own. I’m sure Prof. Tsai had help in doing what he’s done with filter-mask materials, but I hope he’ll allow me to use him as an example of what the non-attention-getter type of engineer can achieve. By and large, he has let his work speak for itself, and now that is paying off in the lives saved, especially among medical workers, who would otherwise have inferior filtering and higher risk for contracting COVID-19.

If you are one of the lucky people these days with access to an N95 mask, take a moment to thank Prof. Tsai and his colleagues for coming up with the ideas that make such things possible.

Karl D. Stephan received the B. S. in Engineering from the California Institute of Technology, his article is published here with permission