The Potemkin experiment in Seattle 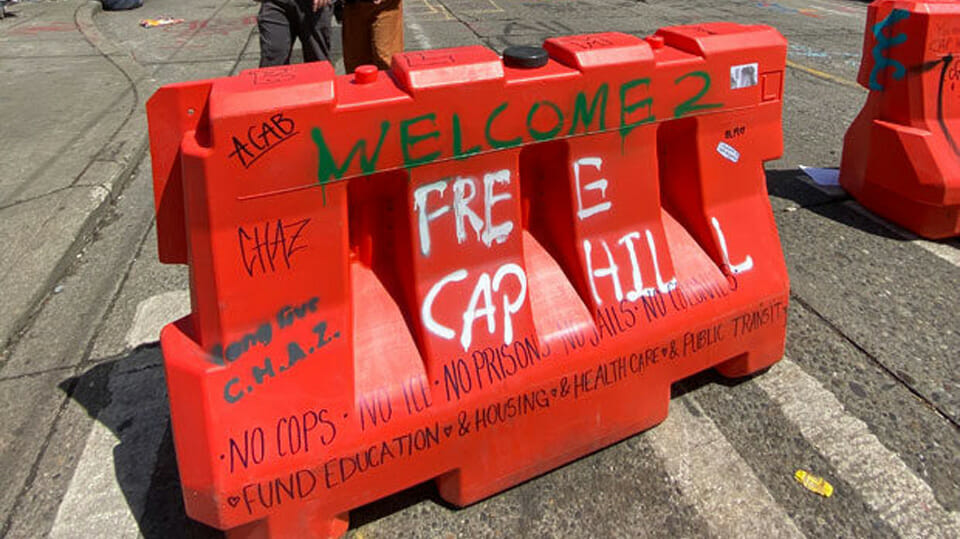 The newest nation on earth – and the left-wing hope of a new progressive way of peace, justice and racial harmony – lasted about 4 seconds before its liberating founders rejected most of the core tenets of anti-Trumpism.

First thing on the agenda for this new nation was a wall (re-termed light fencing by friendly reporters) on the border with the rest of the US, followed by a gun-wielding border patrol.

Yes, the new communist revolution is underway; it is being televised; and it is hilarious.

The backstory is strange. The downtown police precinct buildings of Capitol Hill, Seattle, was abandoned by the under siege police chief, Carmen Best (a black female by the way), under orders from Democrat Mayor Jenny Durkan. A gang of liberators (basically thrill seekers and grievance junkies, and party dudes along for the ride) seized the opportunity to pronounce a cop-free zone.

‘F this sh*t’ said the heady crowd, announcing that America is a dead racist sh*t hole anyway, and established a new nation.  The word ‘nation’ was deemed problematic and so the name was changed to “autonomous zone”. Capitol Hill Autonomous Zone or CHAZ, the land where everything is free, will soon be sending a delegation to the UN.

It was a chance to build a new vision of equality. None of the sins of America would exist in CHAZ. There would be open borders and harmony and equality in Antifastan as it is also known.

That aspiration didn’t last long. Within one day CHAZ had a border, an armed patrol who stop, interrogate and frisk people randomly; and even what looked like a warlord. Refugees are flocking to this land of plenty but must answer a few questions first. If you can pass the ideological purity test, you too can enter.

If you want to do business in Antifastan, it seems you will need to talk to the alleged warlord, Raz Simone. He has not been elected but I guess he will organise free and fair elections soon.

Understandably businesses in Antifastan must pay a tax to the local authority -the guy with the gun. But the upside for them is that they can be sure of having a monopoly on their particular economic sector. Apparently there are 6 businesses operating, which includes 1 liquor store and 2 restaurants. Chaz has a hot dog stall, which has a constant queue, while the ‘no-cop free food co-op’ across the road has next to zero interest. There is a perfectly good explanation for the poor showing at the free food co-op, as it’s been said that the free food was stolen by some homeless guys.

An emergency notice was sent out to the international community looking for essential supplies. The top three items on this list were – and I quote verbatim: Clothes (mens), ice (the good kind), and cigarettes (and lighters). Tofu is also high up on the list.

The good people of CHAZ have taken steps to secure food for their citizens and have initiated an agricultural policy. The farm in Antifastan is a sight to behold. Approximately 20 square meters has been dug up and planted. After the birds are done picking the exposed seeds, and in about four months they might have some lettuce. The future is secure.

However there have already been land disputes. The farm witnessed a hostile standoff, with a drug addict defending his “garden” with the bean trailer. Staggering around the muck patch and fending off invisible enemies he seems to have trampled many seedlings before sitting on a potted plant.

Land disputes, and hash disputes it must be presumed, have been a scourge of the fledgling nation, with incidents involving machetes and heavy cursing being the norm behind the tents in the troubled central province of Tofudishu

Ironically, Antifastan is the most under-surveillance nation on earth. Every citizen has a phone, and until their batteries run out (unless of course CHAZ has found some way of generating power) they can’t stop videoing.

A street preacher managed to evade border security but was wrestled to the ground and dragged to the border. A video of the incident showed him surrounded by a crowd of self-appointed enforcers. He was put in a choke hold, pinned under the knee of a freedom enforcer, while the crowd all the while chanted “you are choking me, I can’t breathe”.

Other more “enlightened” preachers are allowed though. Citizens are treated to regular castigation and deranged rants on white privilege and other stuff. One speaker says white folks should shut the f up because they suck the energy out of ethnic protest. Another says that white folk should reach into their pockets and take out ten dollars and give it to the nearest African-American person. If they don’t they are not “down with this” says the speaker.

The Potemkin experiment is being observed by the world (mostly for laughs), and that wily auld communicator, Trump, is prodding Mayor Jenny provocatively, thereby keeping the public eye on the debacle. She says Trump doesn’t understand democracy or the constitution. Trump says he might have to come over and sort out her problems.

Trump will most likely do nothing of the sort, as it would serve him better to see CHAZ exhaust its energy as the participants squabble over petty things and take their toys home. Meanwhile the actual residents of the occupied territory (yes the land was colonised) are regretting ever voting for Mayor Jen. It seems they are not happy with being stuck in their apartments and having no police or mayor’s office to call on.

Antifastan is the communist experiment in miniature. We can witness the hopeless fiscal and economic failures of communism but thankfully we don’t have to suffer the mass graves. As CHAZ disintegrates into farce; for the rest of us it will be like getting an inoculation against a foolish idea. A small non-lethal dose of communism that exposes you to the disease but doesn’t kill you. Let it not be said that conservatives are anti-vax.

Mayor Jenn and the Democrats would not like the Potemkin experiment to fail so publicly and will send in supplies to meet every request of the warlord of Antifastan.  Will Trump up the game and impose an international blockade? The phoney war is on.

Last night I turned on Monty Python’s Quest for the Holy Grail. I turned it off again as it seemed too ordinary. Antifastan beats it hands down. It is better than any satire I have ever seen.

DNRs being unlawfully placed on patients with disabilities

Why Trump is in with a chance