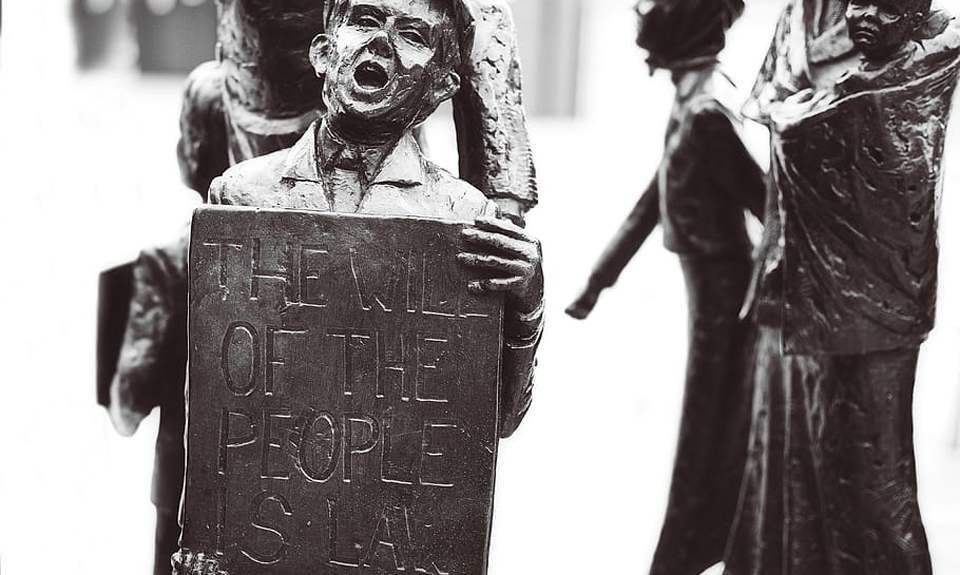 A democracy’s fortitude and constitutional structures can only be judged by their performance through times of strain – times such as when there is no government in place or where a pandemic rages. We are in such a time now, and the rot within the democratic processes and the institutions of this country are plain for all to see.

You just need to look to our recent elections to see evidence of the rot. In 2016, following the General Election at the end of February, it took 73 days to form a government. For 73 days Ministers who had lost their seats retained their posts and continued to make consequential decisions regarding the future of the country – with no reduction in pay, expenses or pension benefits of course. The FG-Labour government had lost 56 seats between them in the election, but continued on with no reduction in the powers of the government for 73 days after the election. The Seanad was impotent because the government had failed to make their nominations to the Seanad. Due to that no legislation could be passed throughout this whole time – to even restrain the actions of government, whilst a government rejected by the people carried on with virtually no dilution of their powers of governance. The people’s voice was ignored for 73 days. The acting government very much had every power to act as they saw fit. There was little consternation amongst the public – with the most prevalent attitude being that they should just get on with the inevitable FF-FG deal to sustain a government.

February 2020 saw another general election, this time one that caused a historical power shift. The election of change it was dubbed. High profile Ministers Regina Doherty, Katherine Zappone and Shane Ross lost their seats alongside several Junior Ministers. It was then that the Coronavirus pandemic came to Irish shores. Suddenly, a government without a mandate was leading the country’s response to the pandemic.

The Varadkar government took actions unprecedented in Irish history, be it in terms of the restrictions placed upon the liberties of its people, imposing a national lockdown, censoring ‘dangerous’ speech, granting additional draconian powers to the Gardaí and availing of massive fiscal powers and resources in its response. There was no input, scrutiny or consent by the Opposition. Ministers and Junior Ministers rejected by the people were still at the cabinet table making decisions that would define Ireland’s future for years to come. The Dáil was neutered; bypassed so consistently that it became routine. Elected representatives would get their updates from the news – the same as the rest of the public.

This carried on for 150 days with no sense of urgency on the part of FF or FG to form a government, and no urgent demand on the part of the public for a government with a mandate from the people. Almost as a given, the Seanad and the ability to pass legislation were suspended. The government without a mandate granted itself any additional powers it felt it needed, and wrote any cheques it felt it needed. Any opposition to this undemocratic affair was assailed as undermining the government. It appeared most of the public was perfectly content with this, with many worried that a change in government from an acting government to a legitimate government may be too difficult to manage amidst a pandemic.

I struggle to articulate how inconsequential the consequential is to the public in Ireland. The best encapsulation of the overall attitude of the Irish people and media was made by a former law Professor of mine – Seth Barrett Tillman. He asked me a very simple question: ‘Could you imagine the response of the Irish people and media if Donald Trump carried on for 150 days after being voted out of office and making the sort of decisions being made by the acting Irish government?’ I laughed, because if what the Irish government did in this country had been done by Donald Trump in America Fintan O’Toole and every member of the media establishment would be writing essays on the destruction of America, how his seizure of power was a repeat of the Nazis seizing power in 1930’s Germany, and how he had murdered American democracy and the Constitution. If our media was as concerned with the maintenance of our own Republic as it was with the United States our democracy would not be in such decline.

Eventually a government was formed, however the unprecedented powers it enjoyed have not been returned – with the new government working assiduously to permanently weaken the power of the Opposition. There has been little coverage of this fact, little attention paid by the public, and no alarm about the undermining of our democracy has been heard from the media (supposedly the watchdogs of democracy).

Just prior to the Summer recess in the Dáil, the government parties railroaded through a motion to dramatically reduce the speaking times and power of Opposition TDs and to empower the voices of government TDs. Or, put another way, to elevate friendly voices and quash dissent. Since the return of the Dáil the government has ensured that the Opposition find out the latest information on any issue at the same as the public. The Dáil is routinely bypassed in favour of RTE News. Government Ministers routinely boycott the Opposition leaving hapless Junior Ministers to serve as punching bags for a frustrated Opposition meant to scrutinise the government. Only this week, the Health Minister Stephen Donnelly opened a debate on the Government’s own ‘Living With Covid’ plan to then just walk out when Opposition TDs started speaking to him. In the unparliamentary language of Aontú Leader Peadar Tóibín TD, he couldn’t bother his arse to listen to the concerns of Elected Representatives of the people.

In the recent debate on Assisted Suicide/Euthanasia, only 70 minutes was given to debate the legislation and speaking times were ordered in such a way that only one opposing voice was allowed to be heard. This was not by mistake, but by design, to put across the appearance that there was near unanimous consensus on Euthanasia and no concern or opposition. Taking the party politics out of the equation, the debate was rigged in such a fashion so as to stifle any dissent or argument that may cause the government difficulty or embarrassment. This is not a new tactic, merely one the government has become more efficient at.

The List goes on and on, from the absolute authority and lack of accountability of NPHET, to the voting down of the ‘Ministers Without a Mandate’ Bill, to the suspension of the Dáil by the government – with TDs finding out from Oireachtas TV.  The rot is deep and well set in.

There is no quick fix or democratic catalyst to reverse the damage done. The damage is not irreparable but has had its toll. To heal our democracy we must treasure our democracy. To repair our democracy requires political will and the support of the people – neither of which exist at the present time.

Presently, our public discourse is limited to pothole politics and the issues of the day – as opposed to the underlying problems afflicting our nation. Recently, I heard the phrase ‘he is going for the Dáil.’ The phrase connotes someone who purifies themselves to appear uncontroversial and concerned solely with the local issues of their own constituency to win election to the Dáil. What does it say about our democracy, that our young generation are forced to concern themselves with potholes to win election. Surely, we should be more concerned with the silencing of dissent than potholes and dustbins.

Yet we do not question or object. Rather we go where government leads, with perhaps a grumble – but not a dissent. We would submit to a dictator if we felt he would take care of our material needs as well as any elected government of our own choice.

Unfortunately, there is no single piece of legislation or measure that can be undertaken to fix what is broken in our country. What must change is our culture, our society. To an extent we must pay less attention to the affairs of our neighbours in Britain and the US, and look more to the structural weaknesses in our own house. We must elevate opposing voices, empower the checks and balances in our systems, and break up hegemonies of opinion or consensus. Like it or lump it, the election of Trump and the pursuit of Brexit has forced America and Britain to debate the countries they wish to be and take a long hard look at the internal affairs of their own territories. Should we fail to recognise the anti-democratic oligarchy developing in this country of ours, soon Ireland will be rudely awoken by the election of an Irish Trump or a shock, Brexit-like referendum result.

Of course, many will dismiss this as scaremongering, but tell me which of them saw the election of Trump or the Brexit referendum result coming?