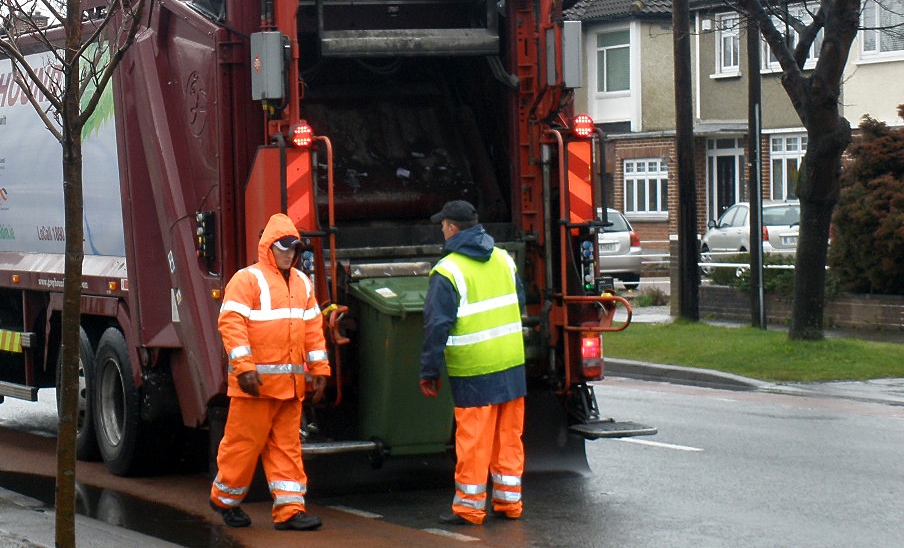 You can imagine my surprise when I received a flyer from someone connected to mywaste.ie informing me that if I do not sign up to some form of paid waste collection process I will be fined. In theory, this is part of a practice of deterring fly-tipping. The fine will not be for illegal dumping but the insinuation is that this is what I would otherwise be doing.

On further research, I learned that local government’s will be enabled to put in place Bye-laws which require people to demonstrate how they manage their waste consistent with national policy as set out in A Resource Opportunity – Waste Management Policy in Ireland which states that:
“all householders will be obliged to demonstrate that they are availing of an authorised waste collection service or are otherwise managing their waste in an environmentally acceptable manner, in accordance with legislation and the provisions of waste management plans, in order to combat illegal fly-tipping, littering and backyard burning of waste by a minority of households, and to avoid the compliant majority having to bear the costs of dealing with the consequences of such activities.”

Now, because the government is unable, or unwilling, to police illegal dumping, they are making it an offence not to have signed up to pay money to a private contractor to collect your waste. Households will be subject to inspection in this regard. Government inspectors will knock at your door wanting to look into your private affairs to see how you spend your money – or if you have a contractual agreement with your neighbour to share waste services.
Illegally dumping rubbish is bad, but these bye-laws do not address the offence of dumping. They penalise you for not spending your money in a particular way – with the implication that you are committing some sort of offence.

In typical Big Brother fashion, the mywaste.ie  website tells us:

A nationwide offensive is to being launched against tens of thousands of homes not using authorised bin-collection companies, with TV licence-style inspectors to knock on doors with the threat of on-the-spot fines.

Local authorities are passing by-laws throughout the State, ramping up their powers to act against households illegally disposing of waste, in what officials are calling the “endgame” for fly-tipping and rogue collectors.

The new powers will allow for an “intelligence-gathering” system whereby licensed kerbside bin collection companies will pass on the Eircodes of paying customers to authorities.

A database will then be used to pinpoint neighbours with no known waste-collection service.

Private waste collectors will be encouraged by the government to rat out households that do not pay for their services. They will be empowered to drum up business for themselves by ‘snitching’ on houses.

That is not how the law should work. The government, in its laziness, is creating crime by-proxy. Will this address fly-tipping? Who knows. But it is another example of government over-reach and inability to actually do its job.

It is essentially another tax. You have no option but to spend more of your income as directed by Government. That is a tax. We pay enough taxes. And will there be sufficient market options to ensure this coerced spending is good value? Certainly not in rural areas where you can choose any colour Model T Ford so long as it is black.

Water charges were a tax in all but name. This is the same. Where do our actual taxes go? Provision of water, waste management: these are all legitimate expectations of taxation. But instead of this, we get crime by-proxy, tax by-proxy. If anything, it is double taxation. The website further informs:

Those found not to have satisfactory waste arrangements face €75 fixed-penalty notices, with 21 days to pay to avoid a prosecution.

Repeat offenders can be hit with fines of up to €2,500 if brought before the courts, while persistent contravention could be met with penalties of €500 for every day of the continued breach after conviction.

If you fail to sign up, the government could bankrupt you without ever having proven or investigated whether you have every even thrown a wrapper out the car window. This is government with a big fat sledgehammer because they have not the inclination to use a scalpel. This is starting to sound like a familiar refrain of Irish governance.

It is one step too far in how the government engages with our private lives. Fly-tipping is criminal. It should be policed, prevented and punished. Not paying money to a private contractor that has a monopoly on services should not be a crime. This is just governing by-proxy.

It may all seem very benign because the intent of stopping illegal dumping is one we all agree with (unless we are doing it) but it is an overstep and an indication of government failure to do its job.  Is it necessary, sufficient, or proportional? I think not. It is a little bit more control.

Necessary: this new approach is only necessary in the face of local government inaction and inability to address fly-tipping. Is it sufficient? It is very unlikely to be so in the same way that TV licence inspecting has not ended non-payment of TV licenses. When fly-tipping is not limited to small householders who could simply use wheelie bins as an alternative, there will still be those who illegally dump. Is it proportional? How serious, widespread and damaging is fly-tipping to the common good that the solution requires governmental invasion of the private sphere? It does not seem to be a threat right now to law and order, so would fail the proportionality test.

One may ask what alternatives to private contractors are out there? There are very few given the waste regulations in place in Ireland but it is not impossible to manage your waste lawfully without a private contract. Some shops provide the opportunity to discard packaging on purchase. Buying only items with recyclable packaging is also possible. Brown waste can be composted. Green waste can be brought to bring centres. You can agree to use your neighbours bin for the small bits left over without Herr Government snooping into your private affairs. The lack of a private contract cannot be considered as an offence-by-proxy for illegal dumping. In all likelihood, the coercion of such contracts will encourage households to maximise their waste to ensure they get full value from their bin, and actually increase waste where reducing and recycling ought to be encouraged.

We would all be better off if the government stopped taking our money through taxes that do not provide these services, let us find our own providers, and the government spend its time actually doing some enforcement of the actual crimes.

Bad news from NPHET: We are at a “dangerous point”