The Coronavirus Manifesto: nothing to lose now but the chains 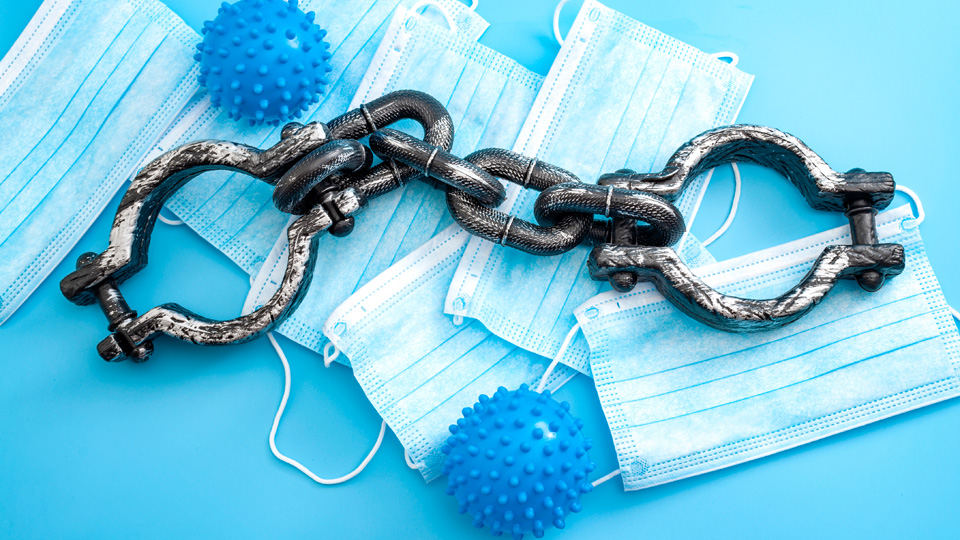 Fianna Fáil TD Marc McSharry has gone rogue declaring his loss of confidence, if he ever had any, with the ‘lockdown only’ knee-jerk response in this country. In the US, the government’s leading voice on the epidemic, Dr Anthony Fauci, has tacitly admitted that the success of the non-lockdown, non-mask strategy in Texas has baffled him.

It is worth asking the question of why lockdowns are counter-intuitively counterproductive.

Dr. Fauci alludes to the answer when he cites that it is down to the behaviour of the people in Texas and Mississippi being better than the behaviour in states with very restrictive lockdown measures where cases remain stubbornly. How can this be? Surely restrictions will mean better behaviours? Even more baffling is that these places with no masks and no lockdowns are perceived as the Wild West, home to majorities that would be considered Hilary Clinton’s ‘baskets of deplorables’, while states that have high cases would be considered as having the sophisticated, smarter, more socially conscious crowds.

It all seems very strange, or does it?

We could hark back to the hyperventilated discussion around Sweden and the effects – benefits or downsides – of a more liberal approach to restrictions, relying more on trust, social capital, solidarity, and people using their own common sense rather than being reliant on government instructions as to what is acceptable behaviour. While the jury is still out on Sweden, it is clear that the absence of restrictions at the level of Ireland has not resulted in the apocalypse. (In fact, Dr Martin Feeley has pointed out that  “allowing for the increased risk associated with the over 80 year old population in Sweden at 4.9% compared with Irelands 3.2% the relative mortality rate is probably higher in Ireland.”)

It doesn’t quite solve the conundrum because if government instruction aligns with the right kinds of behaviour, surely the right results will be achieved? Built into this assumption is that when the government regulates behaviour centrally, it does so sensibly, and that equally, people are compliant and want to be told what to do. It takes no account of human nature, nor the lived reality of people’s interactions. It also puts little faith and trust in people to be able to regulate their own behaviours in their interactions with others. It assumes people are both ignorant and selfish at the same time as being unquestioningly compliant to government instructions. On both cases, the assumptions are at odds with human nature and human co-existence.

When the government takes this approach it ignores social capital that exists in the ‘little platoons’ of society. In fact, it erodes it. As it is with a command economy, when it is centrally controlled, it destroys the information that it needs in order to make the right decisions to enable the economy to flourish.

Roger Scruton notes in his book ‘Green Philosophy: How to Think Seriously about the Planet’: “When law becomes an instrument of regulating conduct, rather than adjudicating conflicts, it changes character. Instead of creating a framework in which human beings can take risks and assume responsibility for doing so, law becomes a universal obstacle to risk-taking – a way of siphoning responsibility from society and transferring it the impersonal state, where it can be safely dissolved and forgotten. As there is the faintest suspicion of risk, the legislators will produce an edict designed to eliminate it.”

This is what has happened in Ireland and near universally in the ‘western’ world. A lot of people have become accustomed to being ruled rather than governed and the Government has stepped up to the task. As the coronavirus came to be considered a near-existential threat to society through an excessive catastrophisation and inaccurate modelling, the Government assumed total responsibility for the management of the virus on behalf of society. When the government steps in, society steps out.

Once this was done, once responsibility was taken from individuals and the social groups, covid-19 became the ultimate point of assessment for the government. Numbers of cases became the sole government priority and the only area where government performance was to be assessed. Everything else became mere contingency. The usual expectations for government – the regulation of conflict and enabling the economy to flourish – were not even secondary, they were discarded. The denial of basic freedoms are hardly questioned, fiscal projections are not even assessed, and the enforcement of petty resentments is welcomed.
The opposition and the media have followed suit, assessing government performance through the lens of taking ‘tough’ decisions in ever increasing regulating of behaviour.  They are all afraid of saying the emperor has no clothes because a groupthink on the virus has been created. It is the new morality.

The precautionary principle relating to the unknown threat of the virus became the raison d’etre of government. Once down the rabbit hole there was no turning back. The government was going to save us, so long as we behaved appropriately. The government could not fail because their approach became unfalsifiable when the only risk being assessed was the public health. If the government policy is not working it is either because the people are not behaving or more restrictive measures are needed. We have had the finger pointed at us regularly – either as a whole or the singling out of particular segments of society for misbehaving in class.

While the coronavirus remains with us, the government continues to double down on its approach, following the fallacy of sunk costs. If it reverses its approach, it will be seen to have admitted it had got it wrong. It has put all its eggs in the lockdown, restrictions, and control of society basket that it is now afraid any backtrack will be seen as a sign of weakness or failure. How else can some of the more idiotic measures being put in place be explained? With a miniscule number of cases of covid-19 connected to outdoor activity, how can such measures stand up to scrutiny? They can’t but scrutiny is absent – because the people cannot be trusted to regulate their own interactions and this is not just the view of government of an increasingly illiberal ‘liberal’ establishment.

Risks are never singular. When individuals regulate their own behaviour in their interactions with others, it is a transaction. Each transaction is unique with a myriad of factors and risks to be considered. The number of human interactions is innumerable and the information needed to best determine the appropriate behaviour in those interactions cannot be centralised. The problem is that many who seek shelter in an authoritarian government (that they consider to be benign so long as it agrees with their views on how others should be controlled) and the government itself, do not trust the people to make those calculations for themselves and they have not invested the time, and effort in giving people the requisite information to make those calculations. The inconsistent, confusing and oftentimes contradictory information and advice is a symptom of neither the government nor the experts always knowing the most accurate information.

The initial, clear information to wash and disinfect hands, avoid coughing on each other, not to spend longer than 15 minutes within two metres of each other in an indoor area – all of which remains relevant today – was supplanted by increasing diktats that contradicted earlier information. We were told by experts that masks were pointless and possibly dangerous – but without batting an eyelid they became compulsory. Restrictions on incoming flights was unnecessary – before it became vital.

The list is not short. Instead of offering clarity in advice on how to interact, the government has focused on preventing interaction and ignored the human reality that interaction is inevitable among the most social of animals. Instead of offering expert advise on managing human interactions, the government doubles down on its forbidding. Vaccine passports are a natural extension of the lack of trust of Government and decision-makers in the citizens and society.

And while individuals would weigh up their risks – the economic, health, social, communal, neighbourly, grandparently risks – the government has refused to do such a balancing of risks. It has assumed the correctness of its positions and shut off the possibility of any calculus of consequences. The economy is secondary. The normally critical illnesses are expected to take a backseat. It has assumed that the benefits of centrally controlled command behavioural economy will perform better than the cumulative benefits of a marketplace of interactions. It assumes the selfishness of people while destroying the vital information that it needs to facilitate that economy of interactions in the best possible way.

Instead of incentivising behaviour it just outlaws it, seeking zero risk regulation which is impossible. When government assumes control of the interactions of individual lives, just as when it takes control of a command economy, the unintended consequences are never positive. And often inexplicable because it loses the knowledge it needs that is generated from human interaction to be able to make the decisions that forbid it.

When the government regulates behaviour it withdraws responsibility from individuals to carry out their own calculus, resulting in abdication of personal responsibility and ultimately less informed personal decision making. Instead of focussing on the most sensible of behaviours such as avoiding protracted periods in enclosed spaces in close proximity to others, people are distracted by irrelevant and marginal issues in relation to the virus around airport lockdowns, whether to wear a mask outdoors or whether the human right to public worship – all of which are mere distractions from government policy that has only one strategy: restrictions.

The example of Sweden pointed to the reality that people are responsible and sensible in weighing up their risks and responsibilities, and Texas has affirmed that, though it will be impossible for many to accept.