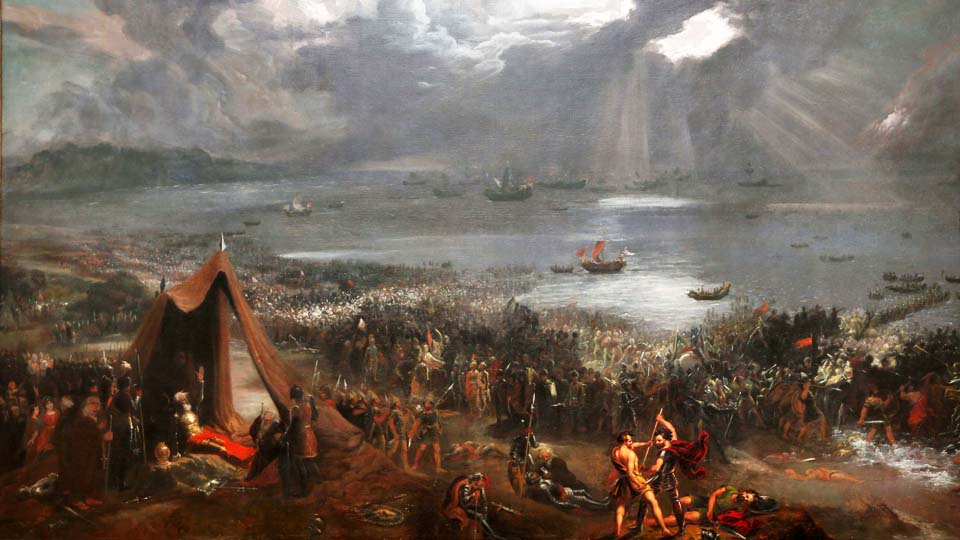 Had the Easter Rising gone ahead as planned on Sunday 23rd April 1916, it would have taken place on the anniversary of the Battle of Clontarf.

Separated by 902 years, Cogadh Cluain Tarbh or the Battle of Clontarf took place in Dublin on the 23rd April 1014. At the time, the Irish High King Brian Ború levied war against a Norse-Gael alliance that existed between Sigtrygg Silkbeard and Máel Mórda mac Murchada of Leinster.

An estimated 8 – 10,000 soldiers were killed in the battle and its immediate aftermath, including all the leading figures such as Brian Boru, Máel Mórda and the majority of the Viking leadership with the exception of Sigtrygg. It was seen as a rout of the foreigners, especially as the kingship of Leinster was in dispute, and many Leinstermen fought on the side of the Irish High King. The battle was a critical event in Irish history especially in terms of Irish folklore, as it is viewed as one of the key attempts to rid Ireland of foreign interference. The Viking invasions were brutal and Brian Boru’s war against them was seen as restorative justice to eradicate what had become a plague upon Irish society.

In the 902 years since the Battle and the Easter Rising, it was always referenced as the idea of nationhood, whether in battle against the Vikings, Danes, Normans, or English invaders. Every foreign invasion was about the plundering of Irish resources and an attempted subjugation of the Irish people, and the natural desire was to undo that foreign dominance to regain national sovereignty. While there are certainly great complexities in the rise of Brian Boru to the kingship of Ireland, the war was about preserving a Gaelic Society which was slowly being infringed upon. Irish churches had been subjected to widespread pillaging by the Vikings and the colonies of Vikings on key estuaries into the Irish sea restricted the natural trade of Irish produce outwards that had existed for centuries. The Vikings had first established themselves in a fortified structure in Dublin in 838, with similar settlements in Loch Garman and Waterford along the East Coast. Dublin was a key port from the earliest times, with numerous expeditions having departed from here, notably Irish armies going to fight Roman armies in England, Scotland and on the Continent.

In the historical context, the years leading up to the Battle of Clontarf had seen an upsurge in Viking raids throughout Ireland. In the year 1012, Sigtrygg had attempted to attack Cork with a fleet of ships but had failed, and a full-scale war was becoming inevitable, with the rise of Brian Boru to the kingship. In 1013 this came to a head when Brian brought his army to Dublin and camped outside the city from September until the end of the year. Sigtrygg had gone overseas to enlist an army, which included Sveinn Forkbeard, who had become the first Norse king of England in early 1014. In April the new Viking alliance sailed in two fleets of ships from Orkney and the Isle of Mann into Dublin arriving during Holy Week 1014, while simultanenously Brian Boru was joined by a number of leading Irish kings including Máel Sechnaill who was part of the Uí Néill dynasty. Although little changed in the aftermath of the battle, except for Máel Sechnaill regaining the kingship of Ireland due to the death of Brian Boru, the battle did temporarily put a halt on the foreign expansion throughout Ireland.

Brian Boru’s army won the battle but it was at considerable cost.  Most significantly, he himself was killed.  In a further blow for his dynasty’s future prospects as rulers of Ireland, Brian Boru’s son Murchad and grandson Tairdelbach were also killed fighting in the battle.  The Cogadh describes both men as great heroes and describes their deaths as heroic.

On the anniversary of that battle 1,006 years later, we must ask who runs Dublin? Is it Irish politicians for the interests of Ireland? Or is Dublin still governed by external powers whose only goal is harnessing the wealth of Ireland for themselves?

Pat Flynn of ClareFM was joined by Prof Ralph Kenna of Coventry University who explained that research – similar to that conducted on modern-day social networks – which supports the view that it was a battle between the Irish, lead by Brian Ború and the Vikings. This was the historical reality, but contemporary historians have tried to claim that it was a civil war of Irish vs Irish but Prof Kennas research supports the original historical analysis.

A depiction of Brian Boru before the battle, painted by P O’Byrne in 1910