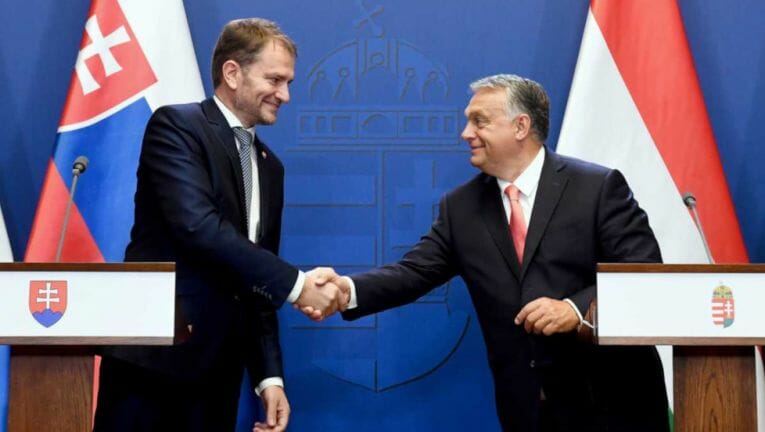 A truly historic meeting took place last week between two countries that have been at loggerheads with each other for decades.

This meeting between the leaders of Hungary and Slovakia was constructive, was aimed at reconciliation and was forward-looking. The stuff of Nobel Peace Prizes. Needless to say, the Western media ignored it. Perhaps they think that only riots and wars belong on the front page, not peace and reconciliation.

It all started behind the scenes with the formation of what was then called the V-3 Group (which became V-4 after Slovakia seceded from the Czech Republic in 1993.) The “V” stands for the former royal castle and town of Visegrád (a Slavic name) in Hungary, inspired by the meeting between the kings of Hungary, Bohemia (that is, the Czech lands) and Poland in 1335 to sort out issues in the region.

On June 2, two days before the centenary of the Treaty of Trianon, the new Slovak Prime Minister, Igor Matovič, invited 100 members of the Hungarian minority in Slovakia to the capital. Trianon remains one of Hungary’s three great national tragedies — the Mongol invasion of 1241; the defeat and death of the king at the Battle of Mohács in 1526, which brought Hungary under oppressive Ottoman rule; and the dictated treaty of Trianon in 1920.

The Treaty of Trianon brought an end to one of the most stable political formations in European history, the Austro-Hungarian Dual Monarchy. The treaty ignored the wishes of local people, created international borders between next-door neighbours, partitioned cities, carved up historic regions, as well as making infrastructure meaningless.

This led to bitterness amongst the newly minted nations of Czechoslovakia, Greater Romania, Yugoslavia and Hungary. Of these states, only Hungary still remains.

Like the Middle East, Central Europe would become and remain a region of instability and war throughout the 20th century.

In his meeting with minority Hungarians, Slovakia’s PM Matovič  greeted them in Hungarian, saying: “Hi there, my dear friends!” In his speech, he expressed his understanding of Hungarians seeing Trianon as traumatic but promised better treatment and co-operation in future. He added that this treaty had brought “suffering to the whole of Europe”. He pointed out that Hungary’s history was that of Slovakia, too, because under the kings of Hungary: “Slovaks and Hungarians fought together. The cities of Slovakia received their charters from Hungarian kings, and their freedoms from the great landlords, and they could thus develop under a kind of local democracy.”

He added something that is extremely important for all the Hungarian minorities wherever they find themselves: a life without fear. Intimidation was a key weapon used by Hungary’s successor states to get the Hungarians to leave lands they had lived in for centuries and it’s still widely found in Romania and Ukraine. Matovič added: “I would really like to see mothers in South-Slovakia could teach their children their mother tongue. This is clearly a reference to Hungarian mothers.”

Hungary was quick to react. Foreign Minister Péter Szíjjártó said: “Trianon cannot become a burden that would prevent Slovaks and Hungarians from looking to the future,” Euractiv reported.

A great deal of improved trade and diplomacy was the background to last Friday’s official visit by Matovič to Hungary and the joint media conference with his opposite number, Viktor Orbán. The latter praised the small Slovak community in Hungary, referring to their towns and churches as “beautiful”. He told Matovič that a bill currently before parliament would hand over state-owned schools to the ownership of the Slovak community.

Orbán added that it is the Hungarian people’s task to live together with an historic injustice but relations with their neighbours should be arranged in such a way that what happened a hundred years ago should not hinder cooperation. He spoke about building a “common future with Slovakia, Serbia, Croatia, and Slovenia … which are proud of their national identity. History has given the chance, perhaps the last, for the peoples of Central Europe to open a new era.”

And what did the mainstream media say about this historic meeting? Nothing.

You might say, “They’re only small countries, who cares?” But they do care when something is not to their taste — like Hungary refusing to change birth certificates for people who choose to go transgender.

It seems the mainstream media has it in for people who have suffered far more than the progressive West (just read Timothy Snyder’s acclaimed history Bloodlands). When they are not ignoring them, they are criticising them over their “populist, nationalist, authoritarian, and illiberal” policies. But imagine if the leaders of Palestine and Israel had shaken hands? How would they have reacted?

Give Hungary and Slovakia a break. After centuries of bloodletting, wars and tyranny, that friendly handshake between Orbán and Matovič was an historic moment.

Christopher Szabo is a freelance journalist in Pretoria, South Africa and his article is reprinted with permission

Where Christmas is forbidden: Pope Francis urged not to abandon underground Chinese Catholics