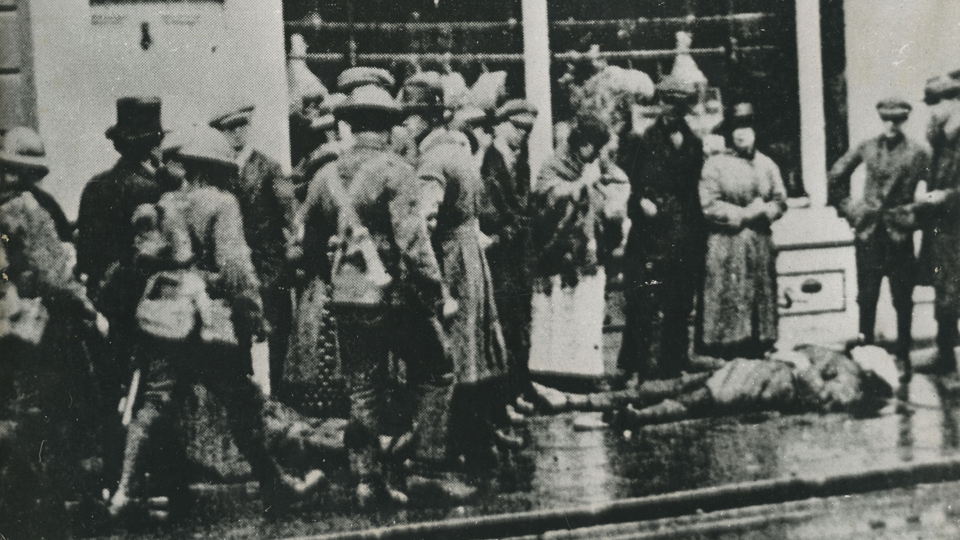 “Come on, he cried, come show your hand you, have boasted for so long
How you could crush this rebel band with your armies great and strong ‘No surrender’ was his cry, and ever no retreat Brave Tracey cried before he died shot down in Talbot Street”
‘Seán Treacy’ by Dominic Behan

This week marks the anniversary of one of the most dramatic shoot-outs in the War of Independence when one of the instigators of the first military action of the war, Seán Treacy, was killed in Talbot Street in Dublin. The Irish Film Institute has now released for the first time footage from the time recorded by a Pathé film crew in Dublin.

Seán Treacy came from Soloheadbeg in west Tipperary, the same spot where he and Dan Breen, under the command of Séumas Robinson on 21st January, 1919, fired the first shots of the Irish War of Independence in an ambush of an RIC patrol where gelignite was seized and two RIC men shot dead. In May of the same year, he led a daring rescue of Vol Seán Hogan at Knocklong train station.

With Dan Breen, Treacy was also involved in an attempt to assassinate Lord Lieutenant Field Marshall, Sir John French near Ashtown station in Dublin in December 1919. The IRA volunteers set up a roadblock but French got through, while Vol Martin Savage was killed. It’s remembered in this riveting interview with Vinny Byrne in 1978.

After a shootout at a safe house in Dublin on October 12th 2020, Dan Breen was injured and taken to the Mater. With Breen in hospital, Seán Treacy went to meet other Volunteers at the Republican Outfitters shop at No 54 Talbot Street on October 14th.

But his high-profile actions had made him a wanted man, and he was spotted by British Intelligence Officers. Two lorry-loads of soldiers were approaching No 54 as Treacy and three other Volunteers, Dick McKee, Leo Henderson and Joe Vize, were leaving.

A fierce gun battle ensued. Treacy was immediately fired on by two plainclothes detectives. He returned fire, killing one of his assailants, but two others fired at close range, fatally shooting Treacy through the head.  Two civilians, Joseph Corringham and a 15-year-old, Patrick Carroll were killed by British Army fire.

The Irish Film Institute has released an extraordinary new collection of footage and images filmed by British Pathé which showed the immediate aftermath of the Talbot Street shooting.  This footage has recently been repatriated by the Irish Film Archive (IFI) from the British Film Institute and British Pathé archives with HD digital copies being created from the original delicate nitrate prints. The film, “Terror in Ireland”, forms part of their Irish Independence Film Collection and can be viewed online free worldwide via the IFI Player ifiplayer.ie/independencefilms/

The centenary of the shooting of Seán Treacy has been marked with a new display at Kilmainham Gaol Museum which features objects intimately connected with Treacy and this incident. They will be displayed for the first time alongside actual footage of the immediate aftermath of the shooting.

The curators said: “The display includes braces and one of the shoes worn by Treacy on the day he was shot. This shoe has a particular poignancy as it is said that the reason Treacy was unable to successfully flee the scene was because he grabbed a bicycle which was too big for him and his feet could not reach the pedals. The shoe and braces were kept as mementos by Treacy’s boyhood friend and comrade, Dan Breen. Also featured is a lock of Treacy’s hair which Breen cut from his head after his death.”

Unfortunately, Kilmainham Gaol is closed to the public at present due to the Level 3 Covid-19 restrictions but the Museum is partnering with RTÉ who will feature the Sean Treacy artefacts on their War of Independence website

Speaking about the display the Collections Curator, Brian Crowley, said “While we had been hoping against hope that we would be open for the anniversary of Treacy’s death, we still felt it was really important that we have these remarkable items out on display on the day. We look forward to welcoming the public back to the Museum when things improve, and in the meantime we are delighted that people will be able to view them online and via our social media channels.”

Tipperary is immensely proud of her revolutionary son, and it has become a long standing tradition  for the county’s hurling supporters to gather at the plaque erected to Seán Treacy in Talbot Street anytime Tipp reaches an All-Ireland Final to read the Proclamation, recite the rosary in Irish, and sing ‘Tipperary so far away’.