Rule by fear: why people are unreasonable in Covid debates 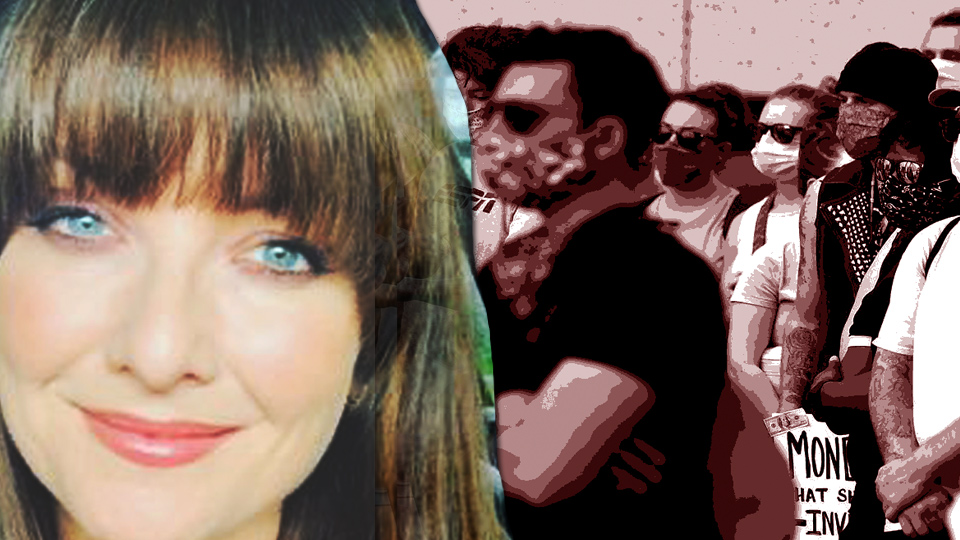 2FM’s Jennifer Zamparelli obviously didn’t get the update memo on allowed topics or opinions when she advertised a discussion on mask wearing on her morning show on 2FM.

We know what is right and we know we should wear a mask. But there are still those who feel it is a discussion that should be had, why is that?
Tune in from nine @RTE2fm

The backlash from the wokeratti was instant and vicious, and Zamparelli said she received all kinds of absue in DM. A fair number of journalists were quick to tell the 2FM presenter she wasn’t entitled to have a discussion.

This person seemed to think it was a discussion to be had.. pic.twitter.com/d8jXHTQ7dJ

And on Wednesday we will be debating whether or not we actually need to put babies in car seats. If you think they're grand rolling around on the back seat, get in touch, we'd love to hear from you. https://t.co/SwKDh48ESX

As with other complex issues, when it comes to masks, the Dunning Kruger effect kicks in immediately, and everyone is an expert all of a sudden

There is no debate. Science saves lives. The experts say wear a mask. The science says wear a mask. Wear a fucking mask and be a fucking decent human being.

Most of these folks would be unaware that “The Science” is not settled, and that it’s still very much up for debate.

Many have asked where I got my data proving that masks do NOTHING to stop the spread of a virus (including Covid-19). Well, here is a screenshot for all you deniers. Straight from the CDC website. 2018 PDF. Conclusion highlighted. Any questions? #MasksOffAmerica #COVID19 pic.twitter.com/OcDtSCKESG

But still, the leftist cancel campaign includes all the usual slurs, libel, and outright threats. In truth, the name-calling world of twitter is not very conducive to a real debate, but if you are able to get into a back and forth it nearly always becomes abundantly clear that these social media “science-allies” don’t really have much of a clue what they are talking about.

That takes a deeper dive.

It starts on twitter or facebook with a statement of outrage, and a long comment thread of (mostly agreeing) remarks. Nothing too deep or thoughtful here; and marked mostly by the authors’ certainty of their moral rectitude.

“These morons are selfish b******s”
“When they get covid, they should be refused treatment.”
“Brainwashed far right fascists”

If you have posted anything similar to this in the last month, congratulations, you are “progressive” and scientific.

Pity the poor health service workers looking after any of this shower of stupid ignorant neanderthals https://t.co/dpCit98psk

Everyone who attended the anti-mask protest in Dublin today are a shower of waaaankers.

Welcome to the world of unreasoned trolling and unthinking tribalism. The virtue signalling no-man’s land knows as twitter and facebook where outrage goes to find company.

But not everyone is as vitriolic and defamatory as the above. Some people are genuinely scared that we are on the brink of a plague (more so on Facebook where the average user is older than Twitter) and so they post some form of critique on the foolishness of emphasising liberty over safety.

This creates a small echo chamber in the comments, and to break it, you have to get into it armed with facts; and like Socrates, ask questions.

There’s a pattern to these conversations which starts with the general statement that masks save lives and that mask critics are inordinately selfish.

When this is questioned the protagonist (let’s call them the mask-signallers) retreat to a less sound argument, and when that is questioned they retreat further down a path of studied ignorance, until at the end they quietly sue for an armistice.

You would think it would end there.

You may make a carefully reasoned argument to the mask-signaller that the mask issue is not as Manichean as they think. You might argue that it’s a way more complex issue that revolves around a fundamental question concerning the wisdom of the mask strategy in general.

Amongst the arguments for the position of the mask-agnostic is that Sweden has taken a more reasoned (and stoic) view of the dilemma, which was based on sound science. It looks like they have made by far the better decision than we have in Ireland when they did not make masks mandatory or shut down. If you make this argument, you can produce graphs and statistics and theory, which reasonably back up your argument.

This is all a very reasonable argument and the typical mask-signaler agrees with the logic, but don’t expect it to end here. This is only step one.

The mask-signaller will be at pains to point out that they only wear masks in shops and to make people feel comfortable, and will say that the elderly and vulnerable must be protected.

Yes to the latter point, and most mask sceptics also agree, but the former is a bit like England’s WWII War effort of bringing pots and pans and prams to melt down to make artillery and tanks. A completely useless exercise designed to hoodwink the population into believing that the government are acting wise and leaderly, and that they (the public) are patriotically playing their part..

The mask-signaller will agree on some points, but they will say that you can’t compare Ireland’s creaking health system to Sweden’s. The most common response is that we in Ireland, with an overworked and underfunded HSE, could not cope with the demand the Covid curve would place on our health service.

We couldn’t? After all Ireland is not a third world economy, why is our health service so incomparably bad measured against Sweden’s?

A simple web search reveals that in 2015, according to OECD figures, Sweden spent the Euro equivalent of €3,932 per citizen on health. Ireland in the same year spent €3,939 on each citizen’s health.

We spent €7 more per person, so what’s wrong? When it comes to ICU beds –the area where we expected the demand to overwhelm us – Ireland has 6.5 ICU beds per 100,000, Sweden has 5.8. On both measures we look slightly better provided for than the Swedes.

So it seems that the big difference between the health service of Sweden and Ireland is not in the capacity of the system, but in the brains making the decisions. Don’t expect that to change; Ireland has embarrassed itself by getting rid of a senior doctor of long experience  simply because he disagreed with the consensus on Covid. It seems “The Science” that the twitter experts cite so much is nothing more than a politicised rubber stamping of policy. In short, it rings of Communist Russia’s Lysenkoism.

But back to Sweden. Twitter always has an answer, and there are plenty of misleading news reports which can be called on to back up any position.

Articles like this which came up in one such thread, saying that Sweden have admitted they were all wrong all along.

However, if you know how fake news works you will ignore the headline and jump to the fifth paragraph where the lede has been buried. This is where we find out that the headline and the facts of the story are as close to opposite as you can get. Point this out by all means, and see what response you get.  Silence is golden.

You would think it all ends here, but the funny thing about Corona derangement is that while it leads people around in circles it seems to always spit you at the start of where you began, where you are invited to start all over again.

You can’t blame them really. Fear does things to people. It makes them irrational and unable to think. It might be a slight overreach to say people have been brainwashed by the institutional narrative, but the prescient words of the great 20th C. journalist H. L Mencken keep spring to mind these days.

He must have been thinking of times like these when he said:  “The whole aim of practical politics is to keep the populace alarmed (and hence clamorous to be led to safety) by an endless series of hobgoblins, most of them imaginary.”