ROD DREHER on his new book “Live Not By Lies: A Manual for Christian Dissidents 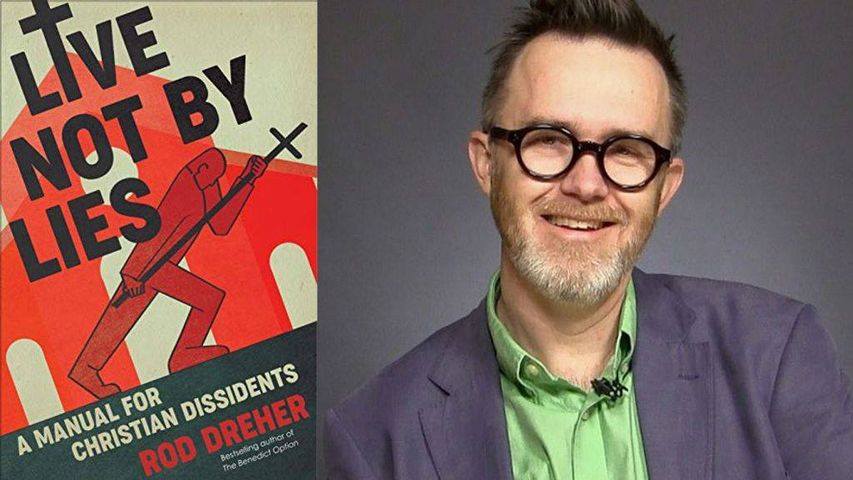 As a new left-wing cultural revolution takes to the streets and seizes control of American institutions, Rod Dreher renews the great Russian dissident Aleksandr Solzhenitsyn’s stirring call to “live not by lies” – that is, to refuse to compromise with ideological tyranny. In a new book, Live Not by Lies: A Manual for Christian Dissidents, (Penguin, Sentinel, September 29, 2020), Dreher amplifies the alarm sounded by the brave men and women who have fought and escaped the clutches of totalitarianism. For years, émigrés from the former Soviet bloc have been telling Rod Dreher they see telltale signs of “soft” totalitarianism cropping up in America.

In Live Not by Lies, Dreher shares the compelling stories of modern-day dissidents–clergy, laity, martyrs, and confessors from the Soviet Union and the captive nations of Europe—who offer practical advice on how to identify and resist the trappings of secular social justice. In Live Not by Lies, Dreher shows how identity politics are beginning to encroach on every aspect of life. Civil liberties are increasingly seen as a threat to “safety.” Progressives marginalize conservative, traditional Christians, and other dissenters. Dreher points out how today’s elites and elite institutions are abandoning old-fashioned liberalism, based in defending the rights of the individual, and replacing it with a progressive creed that regards justice in terms of groups.

In Live Not by Lies, Dreher explains how the totalitarianism facing us today is based less on overt violence and more on psychological manipulation.   The reach of contemporary thoughtcrime expands constantly—homophobia, Islamophobia, transphobia, bi-phobia, fat-phobia, racism, ableism, and on and on—making it difficult to know when one is treading on safe ground or about to step on a landmine. Dreher has done extensive research to provide historical context to today’s Left-wing totalitarianism. He reveals the far-reaching menace of progressivism’s modus operandi, including:

• Social justice cultists, like the first Bolsheviks, are intellectuals whose gospel is spread by intellectual agitation. It is a gospel that depends on awakening and inspiring hatred in the hearts of those it wishes to induce into revolutionary consciousness.

• Smashing all the old forms for the sake of liberating humanity. Social justice cultists believe that after humanity is freed from the chains that bind us—whiteness, patriarchy, marriage, the gender binary, and so on—we will experience a radically new and improved form of life.

• The personal is political. The essence of totalitarianism is that nothing must exist outside the ideology. Social justice cultists demand that wokeness extend to every aspect of life – and that any institution (including the nuclear family) that resists must be destroyed or transformed.

• A false religion. Christianity is declining, but the hunger in human hearts for meaning, identity, and purpose remain. The social justice movement works as a secular substitute for religion, and cannot be resisted effectively if they are only understood as political phenomenon.

• Truth is whatever the rulers decide it is. Hannah Arendt, the foremost scholar of totalitarianism, explains that “a totalitarian state is one that aspires to nothing less than defining and controlling reality.” Today’s media elites define what is and isn’t acceptable. Consequences for violating new taboos are extreme, including losing your livelihood and having your reputation ruined forever. Secular social justice has been shorn of its Christian dimension.

ROD DREHER is a senior editor at The American Conservative. He has written and edited for the New York Post, The Dallas Morning News, and National Review, and his commentary has been published in The Wall Street Journal and the Weekly Standard. He is the bestselling author of The Benedict Option, The Little Way of Ruthie Leming, and Crunchy Cons. SOURCE: Marshall, Nappi & Schulz Publicity

Will loneliness become a major health problem as countries age?