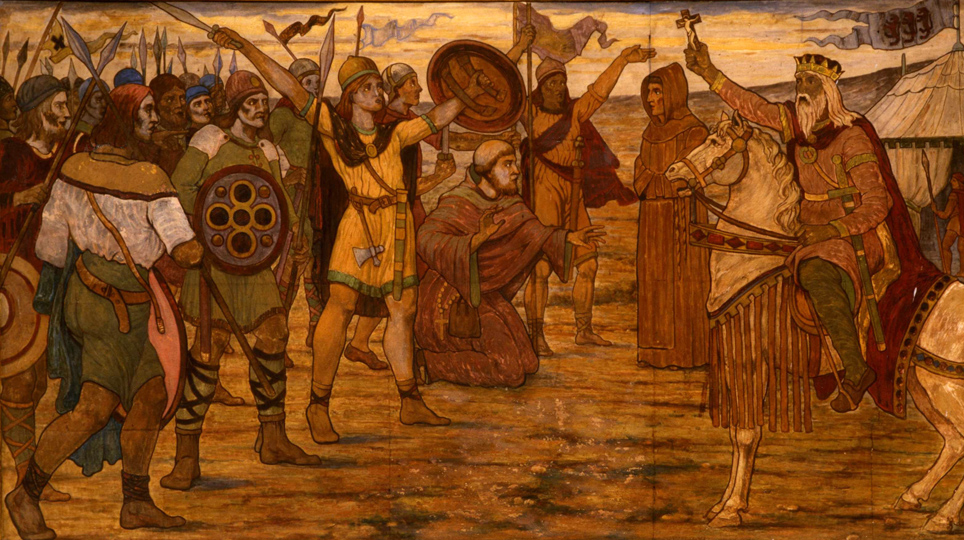 “Clontarf was too important to be left to the historians, so passed into the legend-maker’s hand.”

Gwyn Jones, “A History of the Vikings”

Written around 1280, “Njál’s Saga” is an Icelandic tale of vengeance and blood feuds among various groups of Vikings. It also includes a section on the Battle of Clontarf in Ireland and very briefly mentions an Irish character called Ulf Hreda or Wolf the Quarrelsome. In both accounts, Wolf is described as a formidable and feared nemesis to the Vikings. The creative writer and U.S. television personality, Ben Thompson, in his humorous YouTube video about Ulf the Quarrelsome states “he only appears in history twice and both times he is kicking ass…..it is those who are shrouded in mystery who are often the most interesting.”

Ben is certainly correct, there is much to be said of the “bit characters” of history who appear maverick style for a single mention in the annals.

In his newly released Irish historical fiction novel, “Wolf of Clontarf – The Irish, the Vikings and the foreigners of the World,” historical fiction author, Thomas J. Howley,  uses the Norse sagas and Irish annals as inspiration to bring this obscure Irishman “Faolan an Trodach” to vibrant and swashbuckling life.

In 1006, when a dragon ship’s crew attempts a quick raid on Ireland’s east coast, they are met by the king’s nephew Cormac, twelve Dalcassian warriors and two teen age recruits who will play prominently in the scheme for Ireland’s salvation. Aoife, a raven-haired orphan teen and her little brother act as bait while Cormac and the others destroy the Vikings in a battle by the beach. Wolf makes his first appearance as he eliminates the four Norse guarding the ship and captures their passenger, a Viking princess.

An old Irish woman tells the tale of Wolf’s beginnings. After his father is killed, he and his mother are taken to Dublin by Norse raiders. His mother is later slaughtered by a Viking matriarch and young Wolf is brutalized and starved for years. The old woman dolefully explains the rationale for his unrelenting hatred of all things Norse, and his burning passion for revenge. She is with him during his captivity and present when he is finally liberated by King Brian Boru’s army after the battle of Gleann Mama on the eve of the millennium 1000 A.D.

Young Wolf is sent for academic and military training to a monastery on the island of Innisfallen. He receives a classic education from the good monks while simultaneously undergoing intense physical and martial instruction by the “trainer.” He grows into an immense and formidable physical warrior with a burning interest and talent for military skill and innovation.

Intending to launch a symbolic raid across the sea against the Vikings for the first time, Wolf enlists the aid of natural allies among the Celtic Welsh. He decides to strike a Danish port town just north of Wales with a disguised Viking ship full of Irish warriors while a force of Welsh volunteers attacks from the land. The Irish stumble upon a prisoner of the Danes, Pyrrhus Lakepeno, ambassador of the Byzantine Emperor. The learned and jovial Greek diplomat becomes a favorite among the Irish and a valued ally.

Back in Ireland, Wolf and Pyrrhus discuss history and tactics. They decide to create a small corps of heavy infantry modeled on the ancient Greek Spartans. As recruitment and training ensue, Wolf discovers Aoife, the orphan from the beach, is pretending to be a man and drilling with the others. Aoife is now a beautiful and healthy young woman with a hatred of the Vikings to match his own. He pulls her out of the ranks and places her on his staff where she eventually develops an intricate network of women and girl spies across Ireland and Britannia, giving the Irish tremendous advantage in discerning the intent of the Norse foe. One of the teen recruits, red-haired Fergus, becomes captain of the Irish “Spartans” and Aoife enlists a famous animal trainer, old Blamec MacGoll, to form a never before seen pack of war hounds to employ as a surprise weapon against the enemy.

Pyrrhus also convinces Wolf to develop a separate squadron of light cavalry based on the tactics of the fierce nomadic Magyars. Hard-riding archers and organized cavalry in general are unknown among the Vikings and the Irish. They are mounted on the magnificent local breed of Connemara ponies and the appearance of this small band of Irish “Magyars,” led by the recruit, Cael, result in astonishment and fear for all who see them.

King Brian and Wolf learn, through Aoife’s formidable intelligence apparatus, that King Sitric, Viking ruler of Dublin, and nominal vassal to Brian, is sending word across Scandinavia and the Baltic region to summon Viking warriors in their thousands to invade Ireland.  Brian sends an emissary to Scotland to request the aid of the Celtic king there. Bearing gifts of sturdy ponies, the Irish party convinces the Scots of their mutual threat of annihilation.

King Sitric travels across northern Europe to persuade Vikings of all types to come to Ireland and share the booty and spoils. While his allies are making preparations to support him, Sitric and the Irish leader, Maelmora of Leinster, invade the center of Ireland, Meath. From his stronghold in Munster, King Brian sends warriors to aid Meath’s king and repel the invasion. They push back the invasion and seal the Dublin Vikings and their Leinster allies inside the fortress city. Wolf and Aoife, along with the captains of the special Irish cavalry and heavy infantry units use the time to make careful reconnaissance of the terrain around Dublin, making ready for the climactic battle they know is coming.

All of the “Foreigners of the World,” Norwegians, Danes, Jomsvikings, renegade Saxons and Beserkers pour into Dublin while Scots, Welsh and Christian Norse from Man and Iceland join the native Irish. The battle is joined as surprises occur on both sides and the day turns out to be one of the bloodiest of the middle ages.

In this epic fantasy Howley focuses on the international dimensions of Clontarf to tell an expansive imagined tale of global reach. His Battle of Clontarf, which was at the time a significant world event, encompasses exotic cultural visitors in tolkienesque fashion. The shocktroop infantry of the Gael and the Norse, are complimented by dashing horse archers from the far steppes of Asia. It’s an appealing counterfactual, but why not if it adds to the epic dimensions of the story.

Wolf of Clontarf is an epic tale of tragedy, resilience, subtle romance, and triumph against all odds. Another step in the seemingly insurmountable path towards Ireland’s ultimate national liberation and freedom.

THOMAS J HOWLEY is a retired U.S. Army officer from a Boston Irish immigrant family. His historical fiction novel, “Wolf of Clontarf – The Irish, the Vikings and the Foreigners of the World,” was published by Moonshine Cove Publishing LLC in May 2020.

Hope from hopelessness: sitting out the Corona virus in not-so-splendid isolation