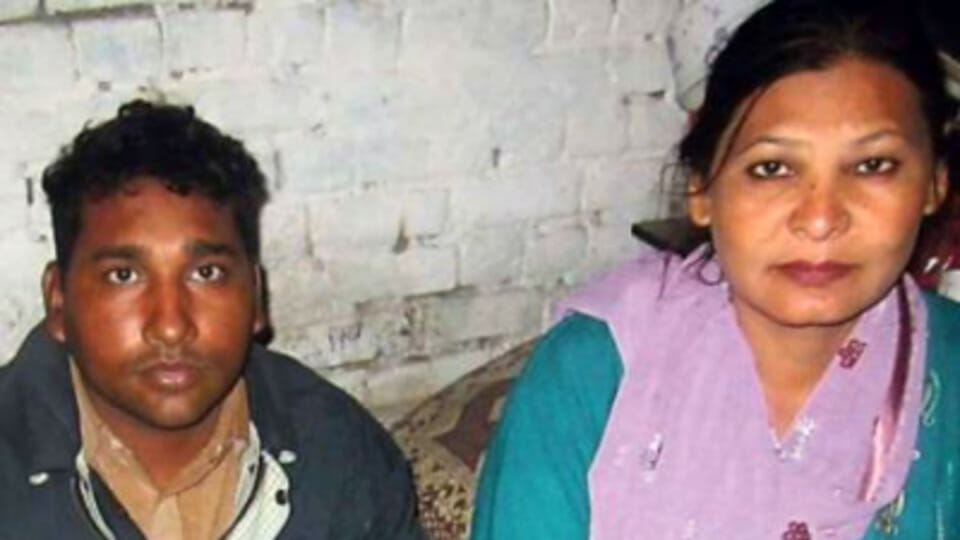 Last year Asia Bibi, a Pakistani Catholic woman accused of blasphemy against Islam, arrived to make a new life in Canada with her family. After being convicted and sentenced to death, she had languished in jail for ten years. Her lawyers received death threats.

But Asia Bibi is far from being the only Pakistani Christian convicted on trumped-up charges of blasphemy.

An illiterate Catholic couple, Shafqat Emmanuel and Shagfuta Kausar, were charged with blasphemy in 2013 and sentenced to be hanged in 2014. Ever since, they have been in prison. A verdict on their appeal was to have been handed down earlier this month, but it was delayed — again. The innocent couple has been on death row for six years.

Supporters say that the allegations are baseless. The couple are illiterate in both Urdu, the local language, and English. Yet they were accused of sending a text message written in English. They have denied the charges.

Shafqat and Shagfuta are simple, struggling village people. Shafqat broke his back in 2004 and has been confined to a wheelchair ever since. Shagfuta was the only breadwinner for their four children.

There was a “confession” – but it was extorted from the crippled Shafqat under torture. He refused until he was told that his wife would be stripped naked and paraded through the streets. That broke him.

MercatorNet interviewed the couple’s lawyer, Khalil Tahir Sandhu, by email. Mr Sandhu is also a Catholic and an MP in the Punjabi Parliament. He is also the Chairman of the Standing Committee on Human Rights and Minorities Affairs.

Can you give us a bit of background on the case? The alleged crime happened in Gojra where a number of Catholics were murdered in riots in 2009. Is this a hotspot of Islamic fanaticism?

Khalil Tahir Sandhu: A criminal case was registered against Shafqat Emmanuel and Shagfuta Kausar on 20th of July 2013 at Police Station of the city of Gojra for blasphemy against the Prophet, an offence under sections 295-B and C of the Pakistan Penal Code which carries the death penalty. The plaintiff is a Muslim cleric named Muhammad Hussain.

Yes, Gojra is the same place where on 1st of July 2009, nine Christians were lynched. It is the epicentre of fanatics and fundamentalists in our country.

More than ten years have passed but Christians there are still horrified and scared. More than 5000 Catholics have been forced into exile in Thailand where they are living in a pitiable condition, surviving on begging and charity.

Are you confident that Shafqat Emmanuel and Shagfuta Kausar will be acquitted? The case against them seems very weak….

The case against this innocent couple is full of contradictions and the accusations are false. They are accused of sending a text message insulting the Prophet to a Muslim cleric. This is completely implausible, not least because every Christian in Pakistan knows that offending Islamic beliefs invites death, either judicially or extra-judicially.

The SIM card of the cell phone which the couple allegedly used cannot be found. Furthermore, there is no proof of purchase for the SIM card from the owner of the local shop. And to top it all off, the husband, Shafqat Emmanuel, is crippled, confined to a wheelchair and totally unable to move around. He was incapable of going to buy a SIM card in his own name from the shop.

Why were they ever accused? It’s impossible to say for sure, but it seems that the couple’s children had a petty dispute with the children of their neighbours.

If they are freed, will they be safe? Mobs were called for Asia Bibi to be killed after her acquittal.

Ironically, Shagfuta Kausar occupies the same cell as Asia Bibi in Multan prison in Punjab. She and her husband are apparently suffering from severe depression. A doctor has reported that Shafqat’s back is almost destroyed from bed sores as he is confined to a prison bed from which he is unable to move.

It is impossible for them to be safe even if they are released. In such like cases, no clemency or tolerance is shown by fundamentalists and religious fanatics.

Anyone who represents them in the courts is also at risk. I have already survived five assassination attempts and I was constrained to shift my family to the UK due to threats on my life. Terrorists were apprehended by police from outside my house by police. (They are now permanently settled in UK as citizens and studying there.)

Defending Christians is a risky business in Pakistan, it seems. I know that Shahbaz Bhatti, a Catholic and the first Federal Minister for Minorities Affairs, was murdered in 2011. As a minorities MP, do you have cordial relationships with Muslim MPs?

As a politician I do have cordial interactions with my colleagues in the Parliament, but the fact remains otherwise in blasphemy cases.

I have defended Christians 27 times since 1998. I remain steadfast with the resolve to continue my struggle against all heavy odds to raise the voice for oppressed and victims of false cases carrying blasphemy charges, forced conversion and other cases motivated by discrimination.

I can be assassinated anytime, anywhere, but I believe my body can be killed but not the soul.

Is there any chance of repealing these draconian blasphemy laws?

There is no chance whatsoever of repealing this law. Lower courts generally award punishments due to their fear of mob reaction. Higher Courts and the Supreme Court take up the cases with utmost care and circumspection. Christians, both Protestants and Catholics, are by and large dismayed and demoralized.

How about international solidarity?

There is some awareness of the plight of Pakistani Christians who have been jailed for religious offences. According to a United States State Department report, in 2018 there were at least 77 persons imprisoned on blasphemy charges and at least 28 of these had received death sentences. Unfortunately, in Pakistan, all minorities are at risk: Shia Muslims, Ahmadi Muslims, Christians, Hindus, Sikhs, and others.

Lord Alton, a crossbench peer in the British Parliament last year raised questions about aid given by the UK to Pakistan “when two children are forced to watch a lynch mob of 1,200 burn alive their parents; when no one is brought to justice for the murder of Shahbaz Bhatti, Pakistan’s Minister for Minorities; when 1,000 Hindu and Christian girls are forcibly married and converted; and when minorities are ghettoised into squalid colonies, which I have visited, and forced to clean latrines and sweep streets…”

Members of the British Parliament recently petitioned the Prime Minister of Pakistan to release “non-violent prisoners” (meaning prisoners of conscience) from jail during the Covid-19 epidemic. It is a wonderful gesture but will achieve nothing.

Khalil Tahir Sandhu is a Pakistani lawyer. He is a member of the Provincial Assembly of the Punjab. He served as Minister for Human Rights and Minorities Affairs from 2008 to 2013. His article is printed here with permission