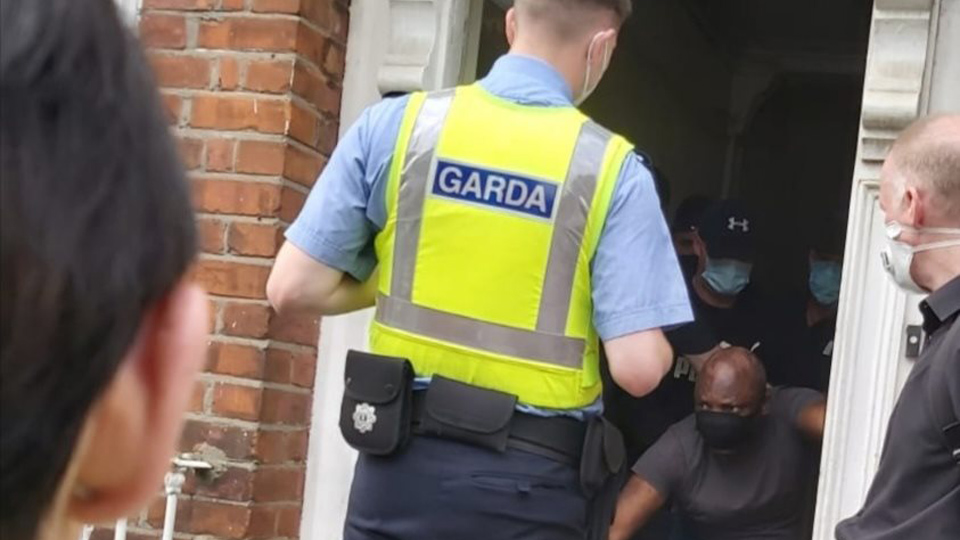 This is not Minneapolis. This is not Portland. This is Dublin. And this happened yesterday.

Last month we had a Black Lives Matter march through the city. Last week we had our president sign into law new powers for vulture funds and banks. Yesterday we had black people dragged out of their home by men wearing Irish flags on their chest.

They were asleep. In their home. Rented from a landlord who didn’t tell them he no longer owned the property. Their front door was ripped open by a platoon of thugs-for-hire. These frightened people did what anyone would do. They called the cops.

The Gardaí arrived and immediately took the side of the thugs. The tenants were thrown onto the street. One of them was a woman. Barely dressed. All they could say was, “Somebody, please, help us.”

The thugs-for-hire smashed up the toilets then proceeded to board up the place. Anyone who questioned anything was threatened with arrest by the police. As the thugs-for-hire walked in and out of these people’s home, they were masked, but the other thing they all had in common was that bizarre Irish flag emblazoned across their chests.

Somebody please help us. But nobody came. No Black Lives Matter. No Antifa. No bandwagon social media poseurs. Nobody except a small group of local individuals outnumbered and outgunned by state sanctioned thugs.

Hours passed and all these tenants could do was watch their belongings be dumped on the street. They were the ones who called the cops but the cops stood with the thugs. Then Councillor Anthony Flynn from Inner City Helping Homeless arrived and he and his remarkable team took action. Dublin Central Housing Action, CATU, and other homeless activist groups and tenants rights groups combined with ICHH to help these people. All volunteers. All giving their time and hands-on support to strangers in crisis. All showing the true spirit of what it means to be decent Irish people.

The man being dragged out of his home in this shot asked me to share this. His name is Elias. As I drove him and the others back and forward to their temporary ICHH accommodation, they told their stories. Beautiful people trying to build a life for themselves and their families brutalised by a system designed to protect the powerful and punish the poor.

Evidently not all black lives matter. Or the lives of any powerless people regardless of race. But when you silently scream ‘somebody please help us,’ it will probably be those people who turn up. The real heroes.

Do sponsors of Pride think showcasing fetish is acceptable in front of kids?