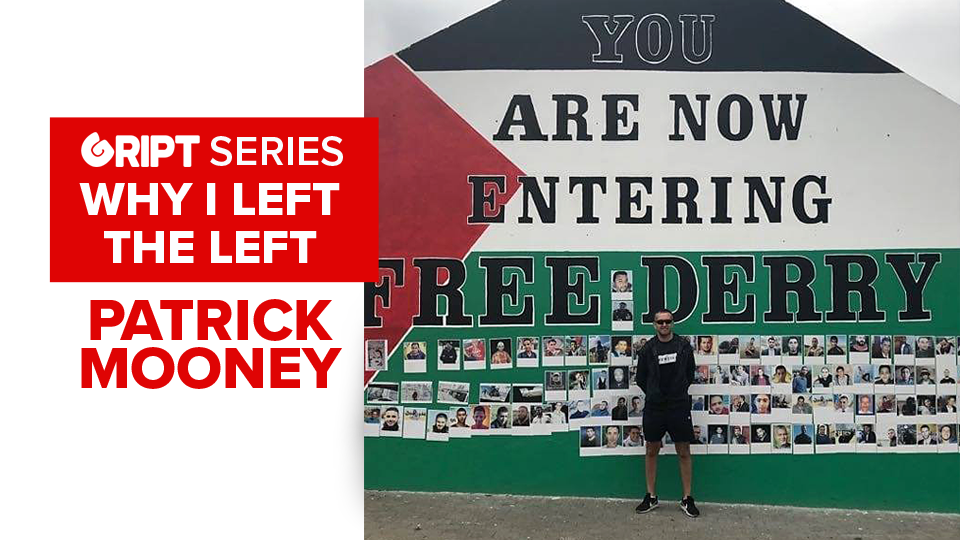 I find it very interesting when I read left dissension. Growing up and learning about politics the biggest influence on me was the Troubles and I identified with that in a Nationalist sense: Irish good, English bad kind of way.

I’ve always thought the media were biased, and I had a pre Celtic Tiger social conscience, prompted by frustration at spending on clocks in the river, Bertie bowls and unusable voting machines while hospitals and schools fell apart. My concept of the left was anti-capitalist, anti-Imperialist and a fair distribution of wealth and still maintain that. There was no social factor to it: I regarded liberalism, as a hippy occupation.

Over the last 10 years I believe people have been brain washed – the indoctrination of the minds of a nation.The establishment has used the media to create a inversion of compassion where we care about gender identity but not about human life itself, for example.

The current path we are on as a society can be tracked back much further, but since 2004 and the Nice treaty we have been on a public trajectory to chaos, and ironically many of the immigrants who joined us since then do a better impersonation of conservative Christians than we do and that’s who we used to be. I am not anti-immigration but I’m only left in terms of economics.

I’m now considered right-wing and Conservative on culture and I didn’t even see it coming.

Today we idle in a no-man’s land where we verge on a dangerous pivot point. Free speech must be upheld regardless of the overall societal narrative, not just because it’s healthy, but because it”s essential.

Of course fundamentals like anti racism and anti fascism must be preserved within that free speech space, but unless good governance or lack of can be discussed – and that covers all policies including sensible migration – then a clampdown on free speech actually breeds the cancer of racism by such discussions taking place in the background without balance. This is happening and feeds back into the monster. Far right is as destructive as far left.

I believe Ireland’s place in what the EU has become is jeopardising our future. Anything given by the EU has been taken back with interest including our identity and our values. Today Sinn Féin appear to be well integrated among the EU elite and while they claim they want reform they look quite happy with the European empire right now. Obviously the prospect of Irish Unity with EU support means they won’t rock the boat but culturally they are on the same page.

In the early 2000s I voted Sinn Féin as I bought the “struggle by another means” plan, and hoped they would replace Labour in left wing politics. I have since watched them move from a predominantly working class party into a populist group with very questionable soundbites regarding their vision of a post-partition Ireland. I have yet to read what in fact an “agreed Ireland” is. Why use other words if its the Republic? I’m now polarised from voting Sinn Fein as they are no longer Republican enough or working class enough and seem to be preparing for a role as junior coalition partner in a Fianna Fáil or Fine Gael government which despite what they say can change nothing.

The great irony of the ultra-liberal left is just how aggressive their intolerance is. Its my view that the left has been hijacked by liberalism and has lost its core values and meaning. It’s why so many of us are leaving.