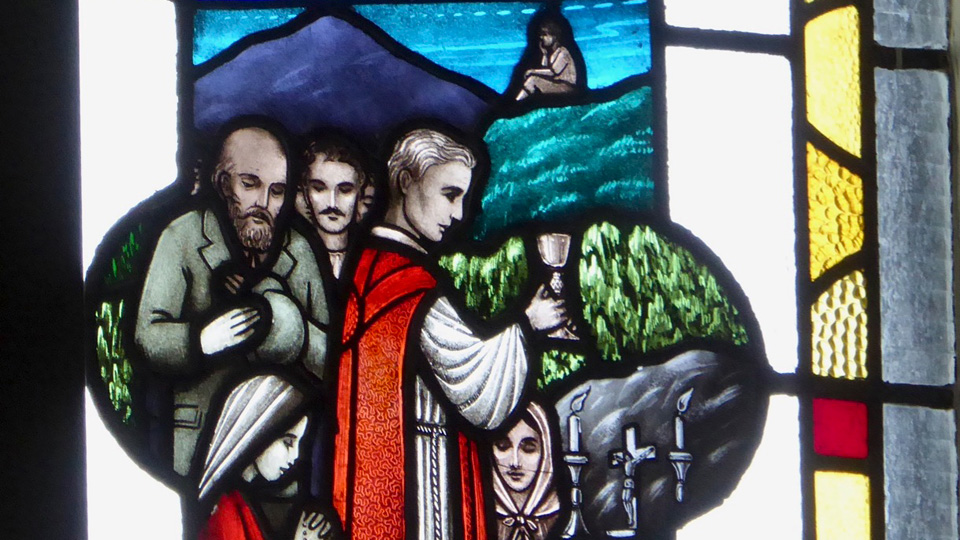 Stained glass window shows mass at a mass rock, with a lookout posted to keep an eye out for redcoats

After the Treaty of Limerick and the Battle of the Boyne, the Irish and English parliaments brought in draconian measures to crush the Catholic population. Even though Catholics had retained ownership of a mere 22% of the land which was further reduced to 14%, the penal laws attempted to ensure that no Irish Catholic would own or be anything of any substance.

The Irish population was in general Catholic and spoke Irish as their first language. The laws aimed at destroying both; enacting discrimination that made it impossible for anyone to live in comfort. The laws put the Church of Ireland – a state Church – in a supreme position and were meant to force Irish Catholics and Protestant dissenters to accept same Church.

In the early years of the 18th century the ruling Protestants in Ireland passed these laws designed to strip the “backwards” Catholic population of remaining land, positions of influence and civil rights. The shameful laws were divided into four or five main categories and included laws against religion, education, property, social activities and the Irish language. Further more draconian laws were enacted in 1704 and 1719 and reduced the Catholic population to dire poverty and misery.

The people held their nerve under these circumstances with many a Mass rock being held in places through the country. Children received their education from a new legion of hedge schoolmasters in their own language; people rose and refused to pay the mandatory tithes to the Protestant clergy and secret groups of agrarian vigilantes got together to protect the little they had. In fact, as Antonia McManus wrote in her book, The Irish Hedgeschool and its books, impoverished parents valued this hedge school education so highly that they bartered flitches of bacon and miscawns of butter for it. It was estimated that there 9,000 such schools throughout the country, attended by 400,000 scholars. People saw it as a way to negate the erosion of culture, language and religion.

In short, these laws included:

Only the English language could be used in a court of law which meant it was outside the realm for the vast majority of Irish people seeking any kind of legal redress.  This, the last penal law in Ireland, was only repealed on 10th January 2020 after 283 years.

These laws caused much suffering for the vast majority of the Irish people and sowed the seed for further discontent and rebellion.

Edmund Burke described the legislation “as a machine as well fitted for the oppression, impoverishment and degradation of a people, and the debasement in them of human nature itself, as ever proceeded from the perverted ingenuity of man’.