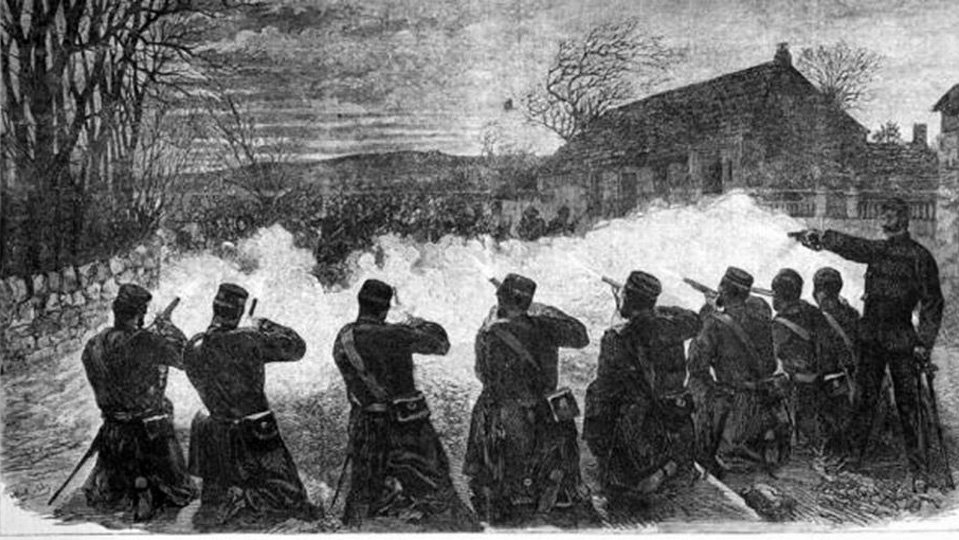 The Fenian Rising of 1867 nó Éirí Amach na bhFíníní was a rebellion against British rule in Ireland, organised by the Irish Republican Brotherhood. The Fenians were a transatlantic association consisting of the IRB, founded in Dublin by James Stephens in 1858, and the Fenian Brotherhood, founded in the United States by John O’Mahony and Michael Doheny, in the same year. Their aim was the establishment of an independent Irish Republic and in 1865, the Fenians began preparing for a rebellion.

The Irish People newspaper was suppressed by British authorities which left Irish nationalists disaffected and more determined in their ultimate aim. The leaders of the paper were arrested including Jeremiah O’Donovan Rossa, Bryan Dillon, Thomas Clarke Luby and Stephens who later escaped. Stephens raised funds in the USA to help organise a rising the following year – 1867. He was also hoping to recruit Irish men who fought in the American Civil War and to get firearms of which they collected approx 6,000.

On 5 March 1867, risings took place in Dublin, Cork city and Limerick. The largest of these engagements took place at Tallaght, County Dublin, when several hundred Fenians, on their way to the meeting point at Tallaght Hill, were attacked by the Irish Constabulary near the police barracks, and were driven off after a firefight. A total of twelve people were killed across the country on the day. When it became apparent that the co-ordinated rising that had been planned was not transpiring, most rebels simply went home

The risings failed mostly because their leadership was in jail; they did not have enough arms; there was insufficient planning and because the authorities used informers.

The Rising was not without success and had political and longer term benefits for the Fenian movement. It galvanised large numbers of people to protest against the execution of Fenian prisoners, many of whose death sentences were reprived as a result. The execution of the Manchester Martyrs provoked an emotional reaction to the Irish public at home and abroad and sparked a conversation on the need for an independent Ireland. They were able to re-organise after the rising and continue in their mission and worked on the Land League and land agitation and other political movements seeking change.

Illustration shows Battle of Tallaght in the London Illustrated News