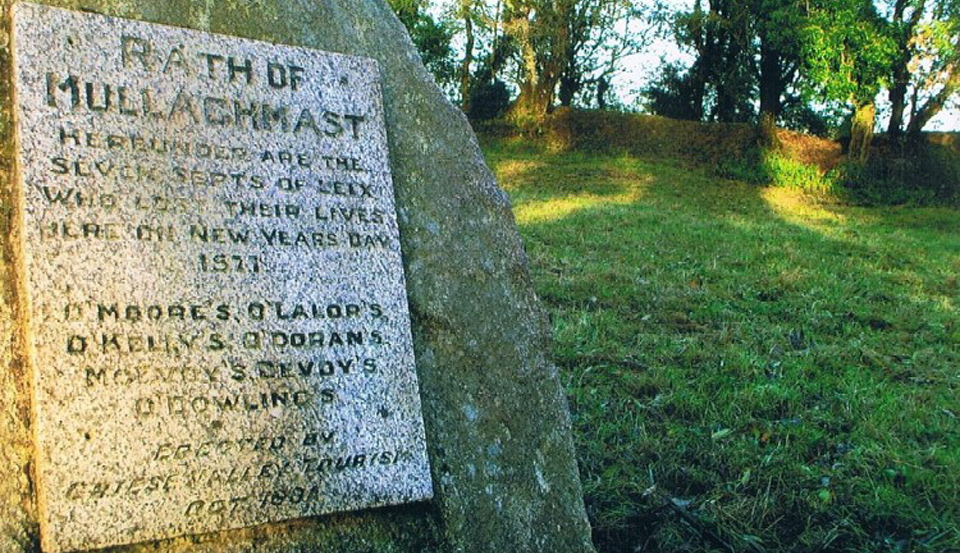 Rath of Mullaghmast. This is the ancient and historic Rath where the seven septs in Laois were lured and then slaughtered by English troops in 1577. Photo Credit: Belan Lodge

Clansmen and women of native Irish families were lured to discuss terms with the English at Mullaghmast, Co. Kildare. To the famous Rath at Mullaghmast which has figured in Irish history from as far back as 82AD. The site consists of a raised circular rampart breached at two sides allowing grazing cattle to wander through at will. It is now difficult to image that here was once the Palace of an Irish King frequently mentioned in the ancient Annals. It saw famous battles fought there in the 2nd and 3rd centuries; it was the ancient seat of the O’Toole clan who ruled over lands along the Kildare / Laois border.

The backdrop to this massacre was the plantation of ancient territories of Laois and Uí Failie, which had been sized from their native Irish occupants and given to English planters. Laois was renamed Queens County and Uí Failie (Offaly) was renamed Kings County. This was not taken lightly by the rightful owners and the two counties were in a state of perpetual war for over twenty years. Some of the English settlers, which included Sir Francis Cosby, decided to finally take out the native Irish families.  Known as an “enforcer”, Cosby was a law unto himself who terrorised and butchered the native Irish. If he wasn’t killing people he was swindling, blackmailing and double-crossing them.

Cosby had some 30 years previously petitioned the Queen to plant in Queens County (Laois) and ‘secured’ lands there at the natives expense. He would continue to ‘secure’ more and more lands. He was given the previous Franciscan religious house in Stradbally by Queen Elizabeth I in 1562, as a reward for his enthusiastic suppression of the natives. There were constant battles between Cosby and his English soldiers and the combined families of O’Mores and O’Connors. As the Gaelic Irish resistance to the Tudor conquest raged in Laois and Offaly, mainly through the above mentioned clans, Queen Elizabeth I ordered Sir Henry Sidney to stop at nothing to fulfil her orders to “cleanse” the region of “disordered persons”.

With the Queens troops and invaluable help of Lord Deputy Henry Sidney, they befriended and colluded with members of the O’Dempsey clan. They concocted a peace gathering where they would invite the clans and supposedly discuss peace terms with them.

Members of the Seven Septs of Laois – O’Moores, O’Kellys, O’Lalors, O’Dorans, O’Dowlings, Devoys, McEvoys, O’Nolans, O’Connors from Offaly – arrived at this place to what should have been a day of feasting and festivities at a banquet. Sidney entraped them in the Rath and suddenly they are surrounded by a hidden army of galloping horses thundering towards them. Chaos erupts. People are trampled and hacked to death by cavalry.  In a matter of no time, everyone is dead including the chiefs of the Seven Septs of Laois – O’Moore, O’Lalor, O’Kelly, O’Doran, O’Dowling, McEvoy and Devoy – and the chiefs of the O’Dunne, O’Molloy, O’Connor and O’More clans

They murdered up to 400 unarmed men, women and children; some were burned at the stake. 180 of the O’Moores alone were put to death. There have been attempts since the massacre to downplay the number of dead. But it was an English man, Captain Lee, who had originally suggested the peace meeting, who reported the number of 400 dead, and who distanced himself from Sidney; he was utterly appalled at what happened. He wrote a stinging condemnation to Queen Elizabeth.  Lee was later executed for supposedly offering support to the Irish during Hugh O’Neill’s rebellion. But in effect, his days were numbered once he exposed Cosby and Sidney.

A man from the Lalor family who had his suspicions about the meeting and had hung back, advanced cautiously after some time and at the entrance saw the dead bodies of his slaughtered kinsmen. It is said that he escaped back to Dysart on his  wounded horse which collapsed and died near Brackna Woods giving to the area a name which it still bears – The Bleeding Horse.

For the native Irish the savagery and brutality was a reminder that the planters were intent on conquering them by whatever means.

After the massacre, the English launched attacks on native strongholds including an attack on the O’Lalor’s castle in Dysart where it is believed that Captain Cosby ordered the hanging of O’Lalor’s wife on the postern gate along with her only child, which was hung from her long hair. They burned the Chieftains homes and villages, murdered their families and left orphaned children. Sidney returned to Dublin and assured the Queen that the two counties were now secure.

The following account of the massacre is found in the Annals of the Four Masters:[2]

Ruairí Óg Ó Mórdha, the Clan Chieftain, who was lucky enough not to attend the “Parley”, emerged as a strong uniting force and continued resistance against the native displacement from their lands in Laois. He was now the guerrilla chief of Laois and Offaly and while he lived, none of Cosby’s men were safe.

Attacks continued on the settlers with several towns burned to the ground. The events at Mullaghmast were so treacherous, that even English soldiers such as Captain Lee defected to the Irish cause. A rallying cry rang out across native territories; “Remember Mullaghmast”.

O’Dempsey, the Irish clan who colluded with the planters for silver, was hunted down and killed by one of Ruairí Óg Ó Mórdha’s chief lieutenants, Niall MacLaoiseach O’More.

Ouney, son of Ruairí Óg Ó Mórdha, slew Alexander and Francis Cosby, son and grandson of Cosby of Mullaghmast, and routed their troops with great slaughter at Stradbally Bridge, 19 May 1597.

For over four centuries the Cosby family has had a continuous tradition of military and civil service in the British imperial and colonial establishment.

The Cosby descendants still hold the same ground  – Electric picnic is held on it yearly.

ON THIS DAY : 21 SEPTEMBER : First woman appointed to US Supreme Court