“You Englishmen, who have no right in this Kingdom of France, the King of Heaven sends you word and warning, by me Jehanne the Maid, to abandon your forts and depart into your own country, or I will raise such a war-cry against you as shall be remembered forever. And this I write to you for the third and last time, nor shall I write further.”

Joan of Arc (French: Jeanne d‘Arc) was a young French woman who was burnt at the stake in 1431 on accusations of heresy. She is considered a heroine of France for her role during the Lancastrian phase of the Hundred Years’ War. She is renowned for fulfilling a legend told years before her birth, that a young woman, known as “the maid of lorraine” would liberate France and create a free nation spared from the brutalities of the English. Despite her powerful faith in God which was the spark that lit her fight for independence, it wasn’t until 489 years after her death that her works would be recognised by the Catholic church.

Born in the small village of Dorémy, France in 1412, she was the youngest of 5; she never learned to read or write but was skilled in sewing and spinning. From the age of 13 Joan claimed to have heard divine voices and seen visions of St. Michael, St. Catherine of Alexandria and St. Margaret of Antioch. At first, these messages were merely instructions for Joan to attend mass frequently and be a good child to her parents. Over time, however, her voices became more insistent. At the tender age of 17, St. Catherine and St. Margaret urged her to go to the aid of the King of France, Charles of Valois whom the English had disinherited. Her goal was help Charles reclaim his crown and to unite the ordinary French people with the Burgundian forces of France who had sided with the English. She was pivotal to the morale-boosting of the French nationalists, who desired a united country.

At this time, France was predominantly under English control, but French lands were also occupied by Burgundy, England’s French allies, led by Philip, Duke of Burgundy. This volatile period of English control consisted of many invasions of French villages and cities. Joan experienced Anglo-Burgundian invasions first-hand and many in her village of Dorémy were forced to abandon their homes because of the constant threat of invasion. Her witness to French suffering, along with the incessant instructions of her voices, propelled her to journey to Chinon, the site of the prince Charles’ palace and convince him to allow her to lead his army to victory. 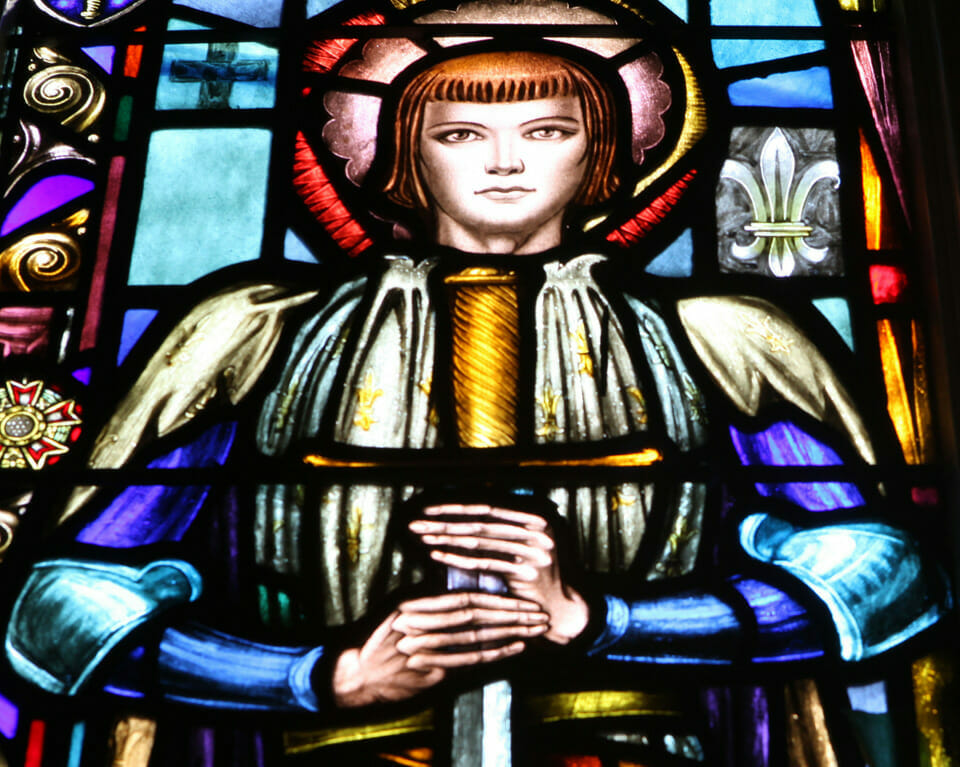 In May 1428, Joan travelled to Vaucouleurs, a nearby garrison of those who swore loyalty to Charles. Initially, she was rejected by the local magistrate Sir Robert De Baudricourt who dismissed her as fanciful, but her determination to complete the task bestowed upon her compelled others to believe that she was the maid in the legend, destined to save France. She acquired a small band of followers and when Sir Robert relented, she dressed herself in men’s clothes, cut her hair and led her followers across enemy lands to Chinon.

Naturally, Joan’s authenticity was questioned by many, especially by those in the Church who believed a peasant girl incapable of having correspondence with divine spirits. After reaching Chinon, it is said that she proved her divine credentials by revealing to Charles information that only a messenger of God could know. To this day, the details of this private audience are unknown. Joan promised Charles that he would be crowned king of France in 4 months if he granted her an army to lead to Orléans, then under siege from the English. Charles, dismissing advice from most of his advisors and generals to disregard her, allowed her this request and sent her off to quell the Siege of Orléans. In March of 1429, Joan, after sending a rebellious letter to the opposition, led several attacks which ousted the Anglo-Burgundians from Orléans and forced them to retreat over the Loire river. The territory was then claimed for France. Depicted as a fierce and brave warrior, Joan also recoiled from the grim realities of battle, according to accounts. During the first day she fought to lift the siege of Orléans, she is said to have wept for the fallen on both sides.

This colossal victory was a definite morale-boost for the French people, who long thought independence a mere fantasy. Her reputation spread widely and her accomplishment at Orléans enabled Charles’ coronation in July 1429. Joan, along with other commanders, then insisted that the French should attempt to retake Paris, France’s capital. Charles, though hesitant, sanctioned the attack, even amid warnings from his trustee Georges de La Trémoille that Joan was becoming too powerful. The Anglo-Burgundians succeeded in maintaining their positions in Paris and conquered an invasion led by Joan in September. A number of factors caused this loss, including the fact that Charles was disinclined to send the mass of his forces to her assistance.

Joan’s efforts would never again receive support from the King, who was more determined to strengthen and secure his gains than to come to her aid. In May 1430, Joan, with a mere few hundred men challenged a Burgundian assault on Compiegne. Though Joan was told by the saints a few months prior to the assault that she would soon be captured by the English, she went to defend Compiegne nonetheless. Joan aided the town’s protectors by leading several small attacks on the large Burgundian force but on May 23 one of her attacks failed, giving way to the enemy to chase her forces out. Although many of her soldiers succeeded in escaping the town, Joan was captured by a Burgundian, the Duke of Luxembourg. When news of her capture reached Paris, the Bishop Beauvais requested that, in the name of England, the maid be handed over in return for 10,000 livres. The money was welcomed and she was handed over and taken to the castle of Bouvreuil, inhabited by the Earl of Warwick, the English commander at Rouen, to face trial. Though her transgressions against England and the Lancastrian monarchy were evident and common knowledge, she was put to trial before a church court because many theologists at the University of Paris wished her to be tried as a heretic. She threatened the Church’s authority through her claims that she, a lowly peasant girl, communicated with God through the visions and voices of St. Catherine and St. Margaret. Her trial also served to tarnish Charles VII by displaying that he owed his coronation to a witch or heretic. Throughout Joan’s trial and incarceration, Charles made no effort to rescue the 19-year-old who implemented his coronation, preferring to distance himself from an accused heretic. 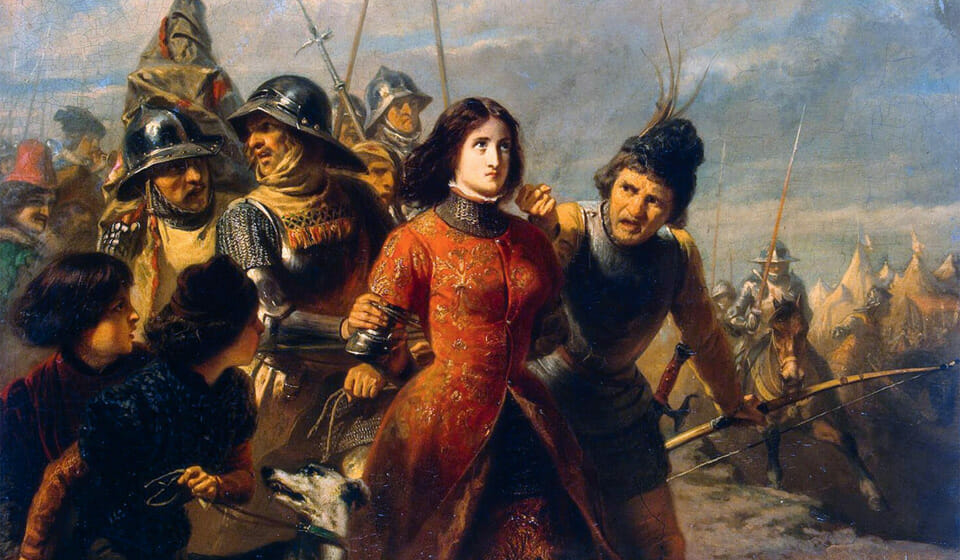 In the trial, Joan was ordered to respond to 70 charges laid against her, including witchcraft, blasphemy and dressing like a man, an act she committed under the command of her voices to protect herself from sexual assault. In March 1431, during her trial of condemnation, Joan predicted that within seven years the English would suffer a far greater loss than that which they suffered at Orléans, and would subsequently lose all of France. In May 1431, after a year in captivity and upon threats of painful death, Joan submitted and signed a form of renunciation, stating that she had never received divine instruction or messages. She then agreed to wear women’s clothes. Though reluctant, because the signing would represent a denial of everything she had stood for, she eventually did so out of unimaginable fear. She was then sentenced to life imprisonment and was dressed in women’s clothes. Several days later, however, the judges found her in male attire. When pressed with questions, Joan answered that St. Catherine and St. Margaret had come to her and told her that her abjuration was a betrayal. She confessed her shame of how fear of torture propelled her to deny her beliefs and that she could deny them no longer.

Joan was again insistent that her voices were true and that they came from God. As a result, on May 29 the judges agreed that she must be handed over to secular officials and on May 30, 1431, she was burned at the stake. Her final wish was to a Dominican in the crowd who she asked to hold a crucifix level with her eyes. As the fire was lit, she cried out “Jesus! Jesus! Jesus!” until she died.

Joan’s death inspired many Frenchmen to continue her legacy, and, as Joan predicted, on November 12, 1437, six years and eight months after her prophecy in the trial, Henry VI lost Paris. This historic event is widely recognised as the event that drove the English from France.

Irish teenager Muireann S reflects on French teenage heroine and patron saint of France, Joan of Arc, on the 100 year anniversary of her cannonisation