An Irish force led by Aodh Ruadh Ó Domhnaill ambushed Sir Conyers Clifford and his men though a pass in the Curlew mountains near the town of Boyle in Roscommon. The English suffered heavy losses while the Irish losses were minimal.

Aodh Ruadh O’Domhnaill proved himself again and again to be a capable military leader, leading raids deeper and deeper into English territory, outfoxing the authorities and ridiculing them in the process. He made strong allies in the province such as the Ó Ruaircs and Mac Dermotts, creating a considerable army of men.

At the time of the Battle, Aodh Ruadh was about 27 years of age, which was considered very young to have such military leadership experience. His personality is reported to have been particularly magnetic, and contemporary sources are united in their praise of his oratorical ability.

During the so-called Nine Years War, in April 1599, the 2nd Earl of Essex landed in Ireland with over 17,000 troops to put down the rebellion of Hugh O’Neill and Red Hugh O’Donnell.  The English Earl made alliances with some of O’Donnell’s Irish enemies, Sir Donogh O’Connor of Sligo and his brother-in-law Tibbot na Long Burke, a son of Gráinne O’Malley. This particular son had been captured and imprisoned in London previously and O’Malley went to London to seek the release of her son. Queen Elizabeth released him but one of the terms of the release was that O’Malley would no longer support the Irish natives in the war to try and reclaim their lands. She and her family were also given titles and extensive lands in return for their compliance.

Ó Domhnaill  saw what was happening and besieged O’Connor at Collooney Castle with over 2,000 men and Lord Essex was out played. In an attempt to keep O’Connor on side, Essex knew he would have to come to O’Connors aid so he Essex Sir Conyers Clifford up from Athlone to defend the castle, to distract O’Donnell and give the English the opportunity to march on Ó Domhnaill  Ulster territory.

Again Ó Domhnaill  outfoxed them; leaving his cousin Niall Garbh Ó Domhnaill  at Collooney Castle, he sent another group of men stop the English reinforcements under Tibbot na Long. He then marched with 1,500 of this men to Dunavaragh where he met with Brian Óg, King of West Breifne, and Conor MacDermott. There they planned the ambush, feeling trees and obstructing the passage; musketeers and archers were placed in the woods and the bulk of the infantry with armed with pikes and axes, laid in waiting hidden from view.

August 15th was a hot day and Clifford’s men had marched all day leaving them hungry, thirsty and tired. At 4pm, they reached the foot of the Curlew Mountains where they were ambushed and further along the road at strategic places; the English were taken by surprise and though there were gun battles, the Irish held the advantage all the time taking hit and run attacks on the English.

According to Padraic Colum in this book A Treasury of Irish Folklore (1989): “Like hounds slipped from the leash, O’Rourke’s Brenny men went upon the Queen’s vanguard… MacDermott’s gunmen and archers gave way to the right hand and to the left, opening out like folding doors as the Brenny men, with a shout at such an instant changed fortitude to alarm, and alarm to panic terror, went upon the foe.”

The English Commander Alexander Radcliffe was shot dead in a charge on Brian Ógs men, leaving the main body of Irish infantry to close in and fight up close. Sir Clifford was also killed by a gun-shot as he rushed towards the Irish. Sir Griffin Markham temporarily drove the Irish back but no avail. Brian Óg led a charge of his own and steadily advanced from the forest towards the English cavalry; many of them escaped on foot, many more pursued by MacDermotts musketeers. Over half the English forces were killed that day.

Brian Óg Ó Ruairc found the body of Sir Clifford, and ordered his beheading.  The taking of heads was considered an honour in Celtic warfare if the opponent was an enemy of worth. tHere’s how The Four Masters praised him, although they understood that he was an enemy.

(Great was the lamentation for the one who fell there.  It was difficult his bad end.  His death did not please the Gaeil of Meadhbh’s Fifth, for he was a man who bestowed jewels and wealth to them, and he never told them a lie.)

Aodh Ruadh Ó Domhnaill showed the head to Ó Conchobhair Sligeach (O’Connor Sligo) who was in Collooney Castle to remind him that he should fight for Ireland and not for the English.  It worked; he surrendered the castle shortly afterwards and reluctantly joined the rebels.

Meanwhile, Clifford’s body was taken to Trinity Island on Loch Cé and a Christian burial was given to it by his enemies.

The Queen’s principal secretary, The Rt Hon. Robert Cecil, M.P., rated this defeat as one of the heaviest blows ever suffered by the English in Ireland, and sought to lay the blame indirectly on Lord Essex. 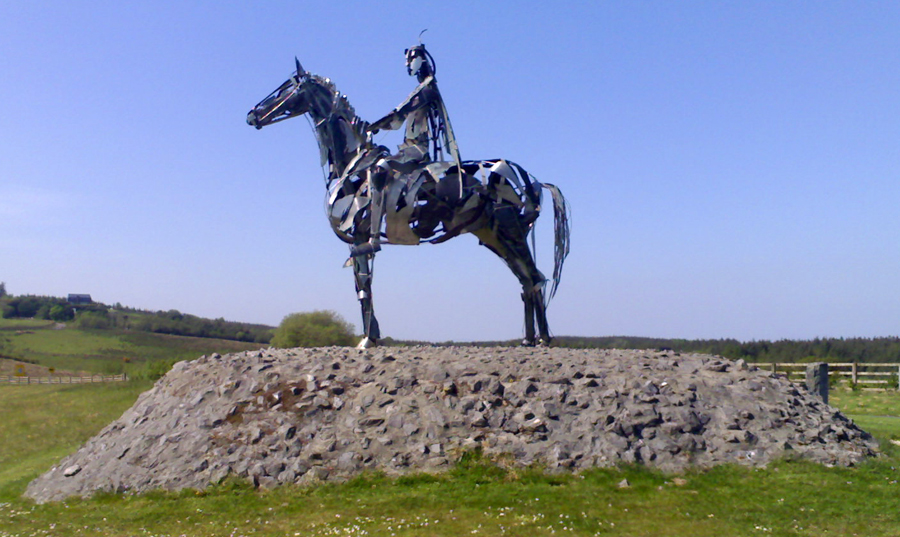