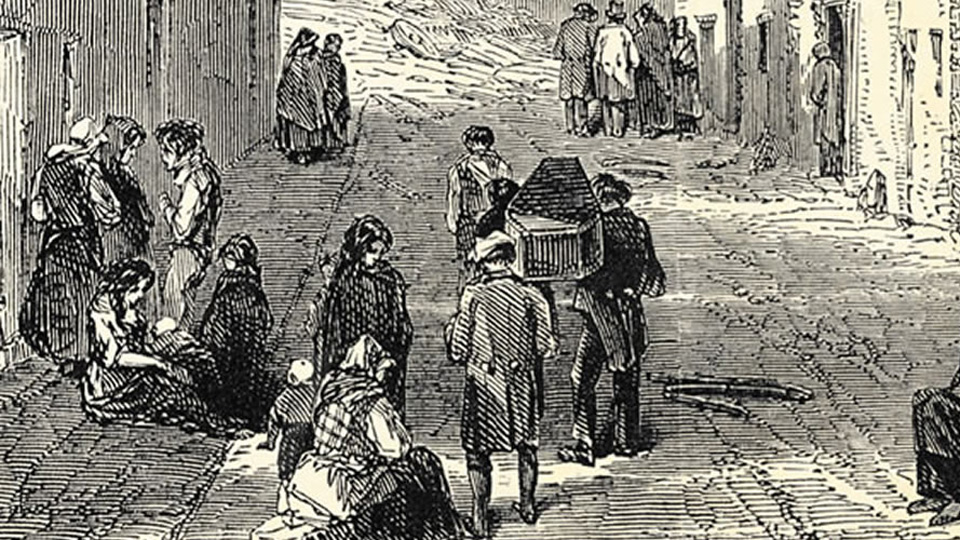 An inquest into the death of Denis McKennedy, a labourer working on a relief scheme at Caheragh near Skibbereen, found that he had ‘died of starvation due to the gross negligence of the Board of Works”

He had been owed three weeks wages when he died at the side of the Road and the results of the inquest were published by a report in the Cork Examiner titled ‘Another Death by Starvation” 6th November 18456.

The English authorities, under Charles Trevelyan,  had set up public works so that people could earn money to buy food but they were ill thought out, slow, bureaucratic, the pay was too low and people did not get paid in time or at all. In fact the pay was so low, that coupled with high rents, people working on these works were unable to both buy food and pay their rent.  The authorities closed the food depots in conjunction with this new departure. Top quality Irish food was still leaving the country by the ship load while inferior grain was imported and was being sold at an increasing cost to the starving workers, who for a variety of reasons as told above were not being paid.  The rising cost in grain prices resulted in the slow starvation of those depending on this shambolic system.

Even though some of the authorities argued that the food depots be opened, no exception was made. International headlines of death by starvation did not even stir them to act.