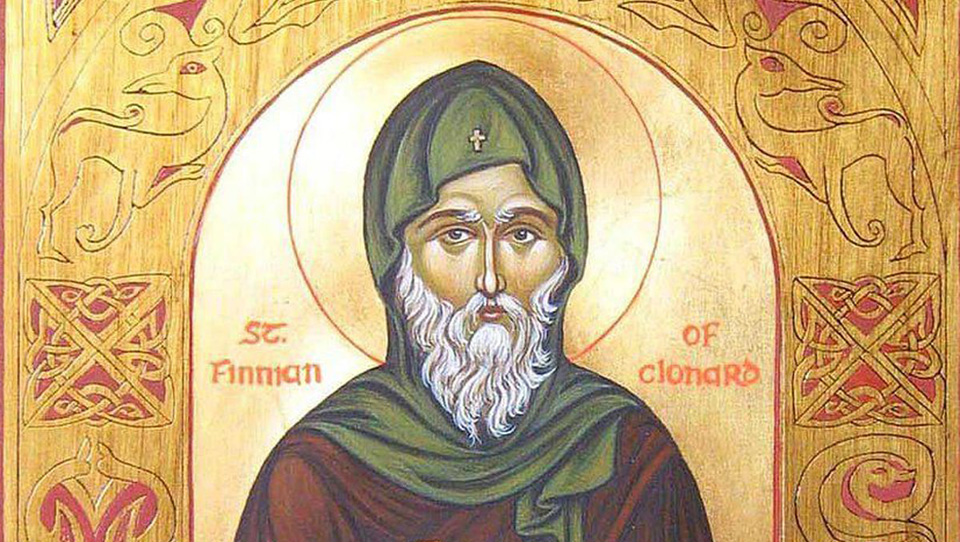 Saint Finnian of Clonard was a member of Clanna Rudhraighe from the Ulaid in the vicinity of New Ross. According to some sources, Finnian studied for a time at the monastic centre of Martin of Tours in Gaul. Tours was noted for its austerity. He later went to Wales and continued his studies at the monastery of Cadoc the Wise in Glamorgan.

He returned to his native land, and founded a monastic community on Skellig Michael, off the coast of Kerry. From there, he went to St Brigid’s monastery at Kildare and around 520, to Cluain Eraird (Clonard) Meath on the River Boyne.

At Clonard Finnian built a little cell and a church of clay and wattle, and entered on a life of study, mortification, and prayer. The fame of his learning and sanctity soon spread, and scholars of all ages flocked from every side to his monastic retreat. The rule of Clonard was known for its strictness and asceticism. The pupils of Finnian who became the founding fathers of monasteries are described as leaving Clonard bearing a book or crozier or some other object, suggesting that a working scriptorium and craft workshops were established at Clonard at an early date.

In the Office of St. Finnian it is stated that there were no fewer than 3,000 pupils getting instruction at one time in Clonard. This was mainly attributed to the extraordinary popularity which his lectures enjoyed; Finnian’s gift for teaching and his absolute dedication to the ascetic ideal. It inspired a whole generation; and students from Europe came to Clonard to study. Ciarán of Clonmacnoise and Columcille of Iona are among the many who trained under him.