ON THIS DAY: 10 AUGUST: The Ballymurphy Massacre 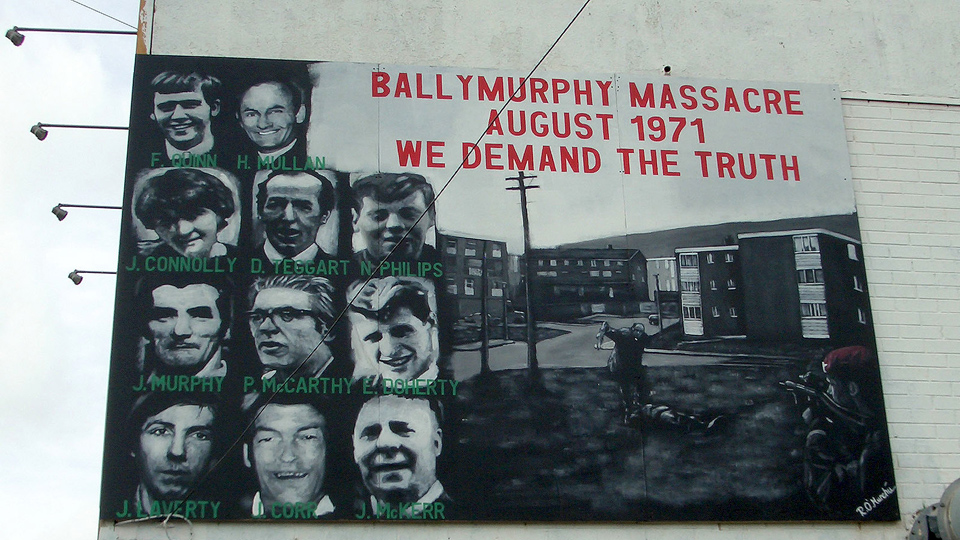 From the 9th to the 11th of August 1971, ten civilians, including a 13 year old boy and a Catholic priest, were shot dead by members of the Parachute Regiment of the British Army in the Ballymurphy area of West Belfast.

The three days of terror became known as the Ballymurphy Massacre.

Just days after the controversial introduction of internment, the Parachute Regiment was sent into the estate to search for IRA volunteers and weapons – arresting whole families in door-to-door raids. Ballymurphy was one of the poorest areas of Belfast, with many Catholics living there denied employment and opportunities because of their faith. The Catholics responded to the raids by rioting, and the situation was exacerbated when Loyalists from a neighbouring estate began clashing with Ballymurphy residents too.

As tensions built, on August 9th, the parish priest, Father Hugh Mullan (38), went over to the British soldiers stationed in Henry Taggart Memorial Hall where those arrested were being taken. Getting no help in that quarter, he returned to the parochial house.

A local man, Bobby Clarke, was trying to help women and children to safety from Loyalist attack when soldiers shot him in the back as they crossed the Manse field. (Clarke survived the shooting.)

Fr Mullan went to help him, waving a white cloth. He was shot dead.  A 19-year old window cleaner called Frank Quinn ran to help Fr Mullan and was shot in the head.

Joan Connolly (44), who had told her children that the “Army wouldn’t shoot you” was shot repeatedly as she stood opposite the Taggart Hall. Her family say she was left crying and dying of severe injuries for several hours.

Daniel Teggart (44), was shot fourteen times, with many of the bullets entering his back as he lay injured in the field. Noel Phillips, aged 19, was also shot dead, and Joseph Murphy (41) was shot, taken into custody and died in hospital

The British Army denied charges of murdering unarmed civilians, and claimed they had been ambushed by the IRA in the area. The relatives of those killed by the army in Ballymurphy say there has never been any evidence for that claim and have sought a full inquiry into the massacre for almost fifty years.

Last year, that inquiry heard one former Paratrooper say that anyone who was seen on the streets in Ballymurphy for those three days was  considered to be associated with the IRA and liable to be shot. He also alleged that some of the regiment were rogue and out of control “psychopaths”.