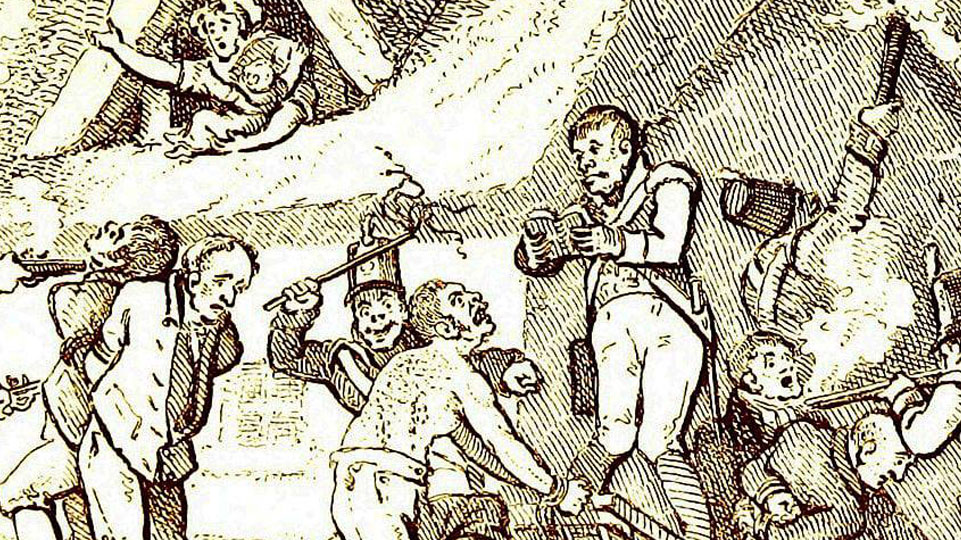 The Whiteboys (na Buachaillí Bána) were a secret Irish agrarian organisation which defended tenant farmer land rights for subsistence farming. They sought to address rack-rents, tithe collection, excessive dues, evictions and other oppressive acts. As a result they targeted landlords and tithe collectors.

Their operations were chiefly in the counties of Waterford, Cork, Limerick, and Tipperary. Members of different religious affiliations took part.

The British authorities were taken by surprise by the planning and organisation of local people and passed several ‘Whiteboy Acts’ to criminalise their activities and hung Whiteboys in public executions to intimidate anyone from joining them.

“British soldiers attacking suspected Irish agrarian agitators circa 1760. Image extracted from page 111 of Ireland in ’98: sketches of the principal men of the time, based upon the published volumes and some unpublished MSS”

ON THIS DAY: 15 OCTOBER 1842: The Nation Newspaper first published

ON THIS DAY: 3 FEBRUARY 1537: Execution of ‘Silken’ Thomas Fitzgerald by Henry VIII and Grey’s legacy in Ireland