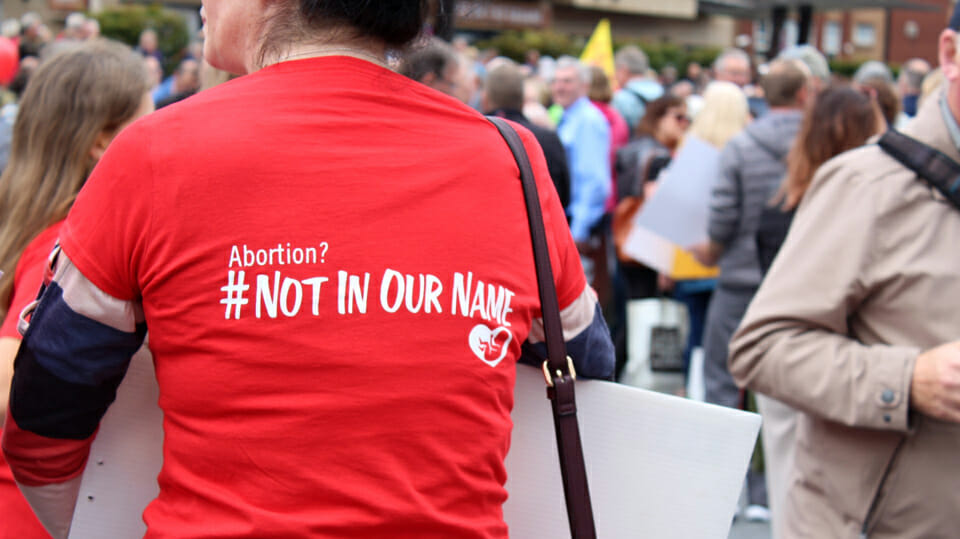 Photo Credit: At the March for their Lives last October

The Northern Ireland Assembly at Stormont has voted against the imposition of abortion regulations by Westminster that allow for babies with disabilities to be aborted until birth. The vote was warmly welcomed by disability campaigners and pro-life groups.

The Assembly debate saw Sinn Féin tying itself up in knots attempting a pretence of opposing abortion on disability grounds while voting against a motion to protect unborn children with disabilities.

The DUP motion rejecting the “imposition” of abortion regulations by Westminster and also rejecting abortion on disability grounds passed by 46 votes to 40 after an Assembly debate. It was supported by most SDLP members and opposed by Sinn Féín.

The motion, proposed by Assembly members Paul Givan, Joanne Bunting, Michelle McIlveen and Pam Cameron, said the Assembly “welcomes the important intervention of disability campaigner Heidi Crowter and rejects the imposition of abortion legislation which extends to all non-fatal disabilities, including Down syndrome”.

Ms Crowther, who has Down Syndrome, is a well-known advocate for people with disabilities who has launched a unprecedented case against the UK government saying the abortion law discriminates against babies with disabilities by allowing abortion up to birth where a range of conditions are diagnosed, including Down Syndrome and cleft lip.

The vote of the Assembly cannot change the recently imposed liberal abortion law in the region but it sends a strong signal to Westminster that the legislature are opposed to the move.

Mr Givan, a Lagan Valley MLA, and several other speakers pointed out that the imposition of the Westminster legislation was opposed by 79% of submissions to a consultation on the issue organised by the Northern Ireland Office.

Given the extent of public opposition, Sinn Féin may have felt under pressure to be seen to oppose abortion on disability grounds. They therefore proposed an amendment to the DUP motion so that it would read: the Assembly “welcomes the important intervention of disability campaigner Heidi Crowter and rejects the specific legislative provision in the abortion legislation which goes beyond fatal foetal abnormalities to include non-fatal disabilities, including Down syndrome”.

That amendment was defeated, as expected, and Sinn Féin then voted against the DUP’s motion.

Paul Givan said the DUP would continue to work for full rejection of the Westminster legislation, saying the Sinn Féin amendment was a “is a recognition of the flawed legislation that Westminster is imposing on the people of Northern Ireland”. He said abortion was a devolved issue for the region.

SDLP MLA Dolores Kelly was also critical of Sinn Féin saying: “I fail to understand why a so-called republican party supports a British government in determining the right to life of unborn Irish children. It’s a long way from the Proclamation of 1916 which promised to cherish all of the children of the nation equally.”

Welcoming the vote, pro-life group Precious Life said that the Sinn Féin motion was disingenuous: “Sinn Fein do not care about the treatment of unborn children. In December 2018, they rejected amendments in the Republic of Ireland on restricting abortion on the grounds of disability along with granting pain relief to babies in late term abortions.

They said the vote “would shine a much-needed spotlight on the extremity of the Westminster-imposed abortion law, and opens up a vital discussion on this radical abortion regime at Stormont. The motion also focuses specifically on disability and seeks to ban abortion on the basis of disabilities such as Down’s Syndrome and cleft lip.”

“While the motion is a positive step forward, it is vital that pro-life people in Northern Ireland make it clear that to protect every child from abortion, we need full repeal of section 9, which allows abortion up to birth for a range of reasons,” they said.

The pro-life group said it was ‘shocking’ to see the anger expressed by abortion supporters at the move to protect unborn babies with disabilities. Amnesty International described the motion to ban abortion on some disability grounds as “a dangerous anti-choice agenda”.

Right to Life UK’s Catherine Robinson said the vote “has made it clear that the UK Government must urgently hand back this devolved matter to the elected representatives of the people of Northern Ireland at the Assembly. The UK Government and Westminster now have absolutely no mandate whatsoever to impose these extreme regulations on Northern Ireland.”

“Polling shows the majority of Sinn Féin and DUP voters want their country’s new abortion framework to only allow abortions when the mother’s life is at risk. Only 5% of all voters support introducing abortion through to 24 weeks, which is in line with what the Government will be introducing to Northern Ireland. This polling shows a clear rejection from the people of Northern Ireland for the UK Government’s regulations. If the devolution settlement of Stormont is to be respected, the cross-community view against this extreme abortion framework must be respected,” she said.

Willie O’Dea: Limerick is insulted, I tell you, about me not being a Minister