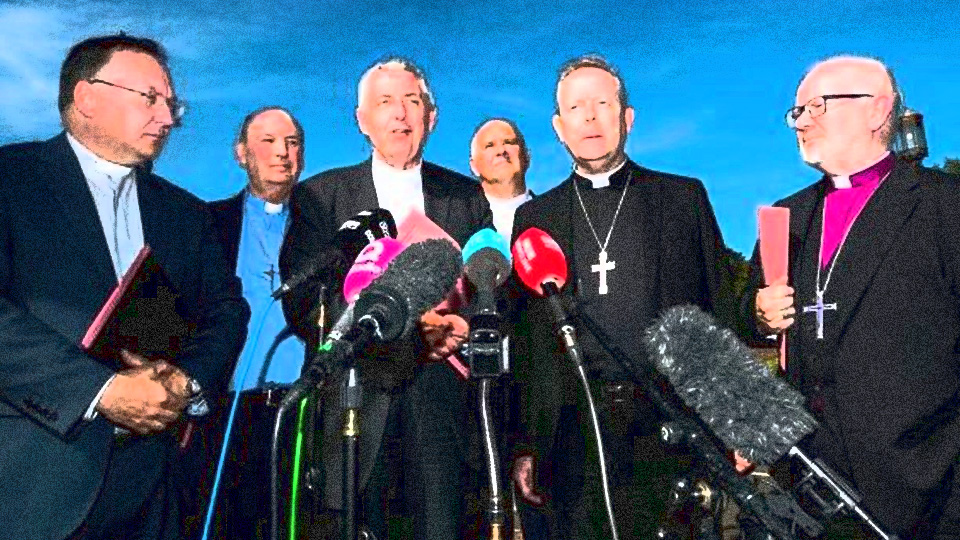 You have to hand it New York Orthodox Jewish community: the Irish Church leadership could learn a lot from them.

When the Mayor of New York, Bill de Blasio – taking time off from marching in massive crowds against imagined rascism –  decided to weld shut the gates of public parks and close down synagogues, the Orthodox community did not take it lying down.

That’s not a simile: the Mayor actually had welding torches used to prevent children getting fresh air in the public parks, and also decided to close the Jewish places of worship down. He added in a menacing manner that they would be rounded up if they dared to break these new rules of the ghetto.

🇺🇸✡️ — HAPPENING NOW: Orthodox Jews with @realDonaldTrump flags dance to music on the streets of Brooklyn in protest of New York Gov. Cuomo’s partial synagogue closures and singling out the Jewish community.

Tellingly, the corporate media did not make immediate comparisons to the Gestapo. Imagine the Nazi comparisons if de Blasio had a (R) after his name.

Mayor De Blasio didn’t mention the Marxist places of worship mind you! They still have free reign to congregate in Nike stores and liberate boxes of sneakers.

Last night, the Orthodox Jewish community of Long Island, decided to hold a peaceful protest (note it was not a “mostly” peaceful protest) on the streets and turned the streets into an open air synagogue in the process. De Blasio sent in the police to round them up, but they are not backing down.

Compare the Jewish leaders’ determination to see their right to worship upheald, to the Catholic leadership of Ireland’s complete subservience to the Irish Corona Czars.

The Catholic Church in Ireland has fallen a long way from the leadership and solace they provided the disenfranchised Irish of the 18th Century. When the Irish were penalised by apartheid and racist laws, the practice of faith was criminalised, and priests were hunted and executed, the Church provided solace to a people in need. Where is the spirit of the mass-rocks?

All over the country, church doors are locked like the inns at Bethlehem. This is not the Church of the catacombs or St. Paul, that provided succour to the leper and the ill and the lonely.

Grandma took her life yesterday. Her doctors helped her