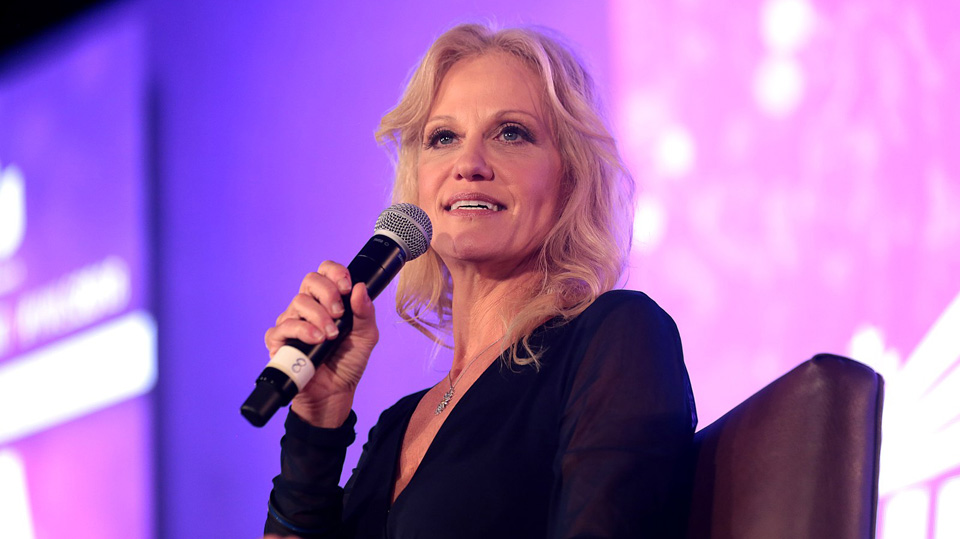 Kellyanne Conway, until recently Donald Trump’s senior counselor, should be a poster girl for ‘lean in’ feminism.

She was the woman credited by Donald Trump (misogynist in chief to the feminist movement) as the main mover behind his system-rocking presidential victory in 2016. Not alone was she the first ever woman to successfully run an American presidential campaign, she took over the reins a mere three months out from polling day when the campaign was floundering. Her predecessors in the role were both male. They were both fired by Trump. This week, she resigned for reasons that had nothing to do with her work or relationship with her boss whom she still publicly supports. Her reasons related to the stresses of being a pioneering career woman and mother to four simultaneously.

Is she receiving any public support from leading feminists ? No more than she received acclaim for breaking a very solid glass ceiling back in 2016 – something ignored by the feminist sisterhood while they dissolved in angry grief over Hillary Clinton’s failure to do so. Because in the final analysis, the feminist movement has become a special interest lobby for women of a certain political stripe who want to force all women to join them in achieving equal representation with men in academia, politics and business.

When Maria Steen of the Iona Institute, pointed out in an Irish Times column earlier this year, that more than two thirds of Irish mothers would prefer to work part-time, she was excoriated by a bunch of feminist commentators who feel they know what women want without actually consulting them. But then they are not looking at the aspirations of women in general, just the aspirations of women who want equality with men in the higher levels of working life. They seem happy enough with the fact that the ‘drudgery’ of home life and the care of children falls to other women who have a further tricky balancing act to negotiate. Along with the work/ home balance of their careerist sisters, they also have to balance the psychological demands of running their own households after spending the working day running someone else’s. The feminist movement seems no more interested in that question now than it was when Betty Friedan announced that home based life equalled a ‘slow death of mind and spirit’ for women a generation ago.

Not good enough for some women but plenty good enough for others. Most women in employment, whether in housework and childcare or not, do not aspire to break any glass ceilings.  They would get as much, or more, fulfillment at home as survey after survey has shown. Also, unlike their high climbing sisters they do not earn enough to pay for the kind of domestic support that smoothes the way for working mothers.

Despite her privilege, Kellyanne’s home/work balance obviously caused stress within the family to a point where her teenage daughter raged against her ‘absentee’ mother on social media. Of course it is not easy for the children of conservative parents amid the woke intolerance of schools and campuses and it is hard to say just how much of that is feeding into Claudia Conway’s angst. Lockdown and the covid19 crisis, what Kellyanne Conway calls ‘the new, not so normal’ appears to have stretched existing tensions to breaking point. If this is what it is doing to the Conway family, how difficult must it be for families without their resources?  Remote schooling for children demands parental supervision and involvement of a kind and degree never before experienced.  Kellyanne found the commitment required too taxing to combine with her career.

It is revealing that Claudia Conway attacked her mother, not her father for absenteeism. Why is one high flying parent more pivotal to home life than the other, in the opinion of a fifteen year old daughter ? What is the ‘Mama’ factor?  Is it really only a social construct after all? That should be a question of interest for gender theorists. Kellyanne says women are ‘mothers first’.  Men with children are also fathers before they are politicians, or doctors or dockers or anything else. But in an intact family how often do you hear fathers complain about conflict between their roles?

Kids-sized T-shirts with Kellyanne’s words about her future role, ‘ less drama, more Mama’ have hit the shelves in America. To use a phrase that Kellyanne made famous, perhaps there are ‘alternative facts’ after all? In this context, they are the facts that the feminist movement tries to keep hidden behind very opague walls as they aim at the elusive glass ceiling.

DR. ANGELO BOTTONE: A debate on how to tackle a shrinking population is long overdue