Is the coronavirus epidemic increasing forced organ harvesting in China? 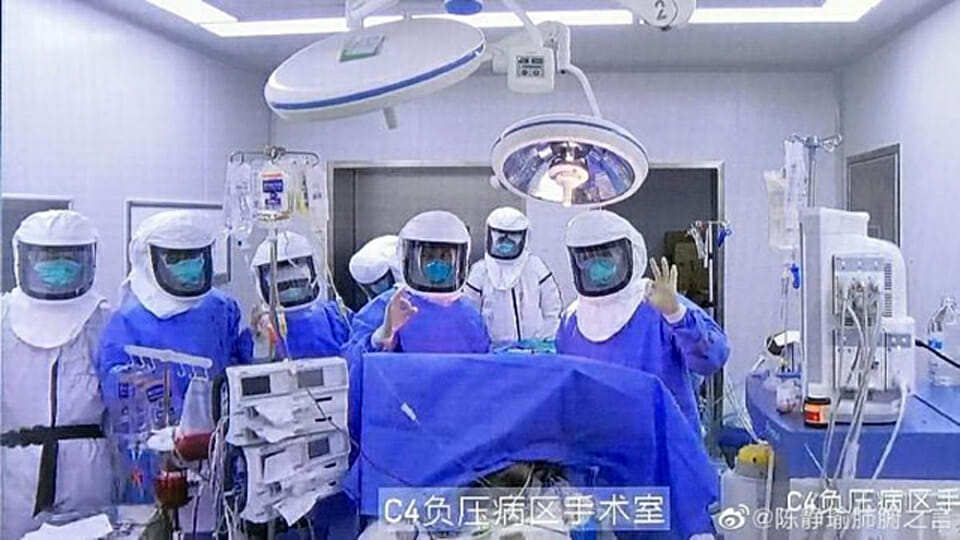 The ugly spectre of China’s grim illegal organ trade reared its head again this week with the publication of the final judgment of the London Tribunal into Forced Organ Harvesting in China.

This coincided with front page headlines in most national world newspapers on Tuesday trumpeting China’s first double lung transplant on a coronavirus victim. The patient, who on February 24 was given days to live following rapid deterioration of his lung function, had only to wait five days before a perfectly matching, “consenting,” brain-dead donor could be found. Conveniently it was a mere seven hours by high speed train from Wuxi, where the operation was to take place.

The much-vaunted news report is a timely illustration of the suspicions and conclusions reached by Sir Geoffrey Nice QC and his team over six months of witness statements and somber personal accounts, held from December 2018 to May 2019.

Their full judgement report released on March 1, much of which has already been covered extensively by Bitter Winter, speaks of waiting times as low as two weeks for replacement livers and organs on demand for overseas patients willing to pay the price.

Their misgivings as to the origin and provenance of the organs are perfectly illustrated by the five-hour procedure on the coronavirus patient carried out at breakneck speed from diagnosis to surgical intervention, hailed as a success by Xinhua, the CCP mouthpiece.

Whilst around the world waiting times for a single lung from a suitable donor could be years, China has shown this week that it need only be days, for two perfectly matched lungs to be rustled up.

In order for the propaganda coup to be successful, surgeons had to throw themselves into the coronavirus lion’s den. Lead surgeon Dr Chen Jingyu admitted that, “it was a big gamble.” He added, “we were not sure if there was still any virus left in the patient’s lung, or if it was infectious.”

His ultimate ambition for the future was to offer this procedure to all Coronavirus victims in critical conditions. “To give them hope,” he said, making no mention of how future lungs would be sourced at short notice.

The full tribunal report contains shocking new evidence that President Jiang Zemin (1993-2003) himself issued the order to harvest organs from Falun Gong practitioners, and that Chinese government complicity is evidenced at every turn.

Significant discrepancies are detailed in the conclusions of the report, which show wide scale falsification of official data. Transplant cases have more than doubled over the past five years, with no extra donors to match. Despite Beijing’s agreement in 2015 not to continue to source organs from death row prisoners, there is evidence that the “voluntary” versus “non-voluntary” donor goal posts have simply been changed and prisoners are now simply all classified as “voluntary.”

The tribunal described these as “contradictory” and “implausible” misclassifications which were “incentivized” by large cash payments.

Jacob Lavee, one of Israel’s top heart transplant surgeons, was so shocked in 2005 that one of his patients was traveling to China for a new heart which he had ordered two weeks in advance, that he has become a lead campaigner against the organ trade. He has no doubt that the majority of the 712 transplant hospitals in China use organs from unethical sources such as prisoners held on religious grounds.

He said, “Chinese physicians are not only involved in mass murder and crimes against humanity, but the international community and World Health Organization for some reason shut their eyes against these crimes.”

Most of the atrocities to date have been carried out on Falun Gong followers, whose “Bloody Harvest” has been well documented by David Kilgour and David Matas, and by Ethan Gutmann in his account, “The Slaughter.”

But following the subsequent round up and imprisonment of tens of thousands of adherents of The Church of Almighty God, and the comprehensive DNA and tissue typing of around 15 million Uyghurs since 2017, there is no reason to believe that they are not becoming the next victims of China’s grisly organ trade.

Already, the Tribunal report details evidence that the Saudi Arabian government is paying for its citizens to travel to China where there is a pool of “halal” organs available on demand.

The Chairman of the Tribunal, the prominent war crimes prosecutor Sir Geoffrey Nice, QC, has stated unequivocally that “acts of torture” have been inflicted on the Uyghur population, of which “hundreds of thousands and possibly millions” are imprisoned in China.

Following the summary judgement of the tribunal published in July 2019, the full 150-page Full Judgement Report released this week reiterates its conclusion that the state-run program of organ harvesting is continuing.

This, according to the tribunal, is one of the world’s “worst atrocities” committed in this century.

He added, “the conclusion shows that very many people have died indescribably hideous deaths for no reason, that more may suffer in similar ways, and that all of us live on a planet where extreme wickedness may be found in the power of those who are, for the time being, running a country with one of the oldest civilizations known to modern man, which we should be able to respect and from which we should be able to learn.”

News today that China is trumpeting another first for its own indomitable band of medical lionhearts, in the face of the highest odds that coronavirus could throw at them, should fall on unimpressed and deeply sceptical ears. Serious questions, not adulation, should be asked about future operating room heroics, particularly when they involve further double lung transplants at short notice.

Ruth Ingram is a researcher who has written extensively for the Central Asia-Caucasus publication, Institute of War and Peace Reporting, the Guardian Weekly newspaper, The Diplomat, and other publications. This article has been republished from Bitter Winter with permission.

Rising global poverty is the real impact of the Corona fight