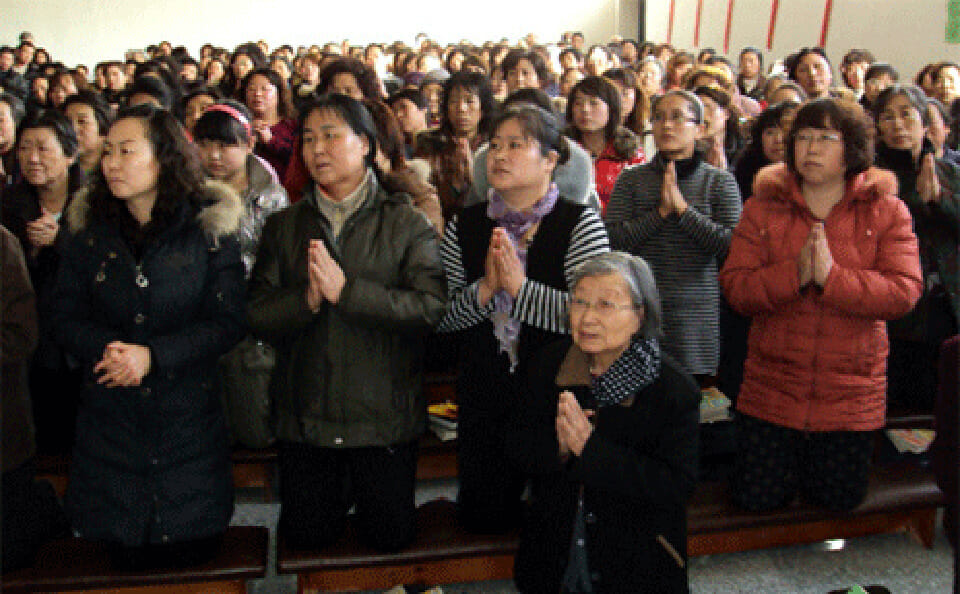 In February 2020, in the middle of the first wave of coronavirus infections in China, Hong Kong’s emeritus bishop Cardinal Joseph Zen Ze-kiun visited the United States and spoke with members of Congress.

Cardinal Zen, a vocal supporter of Hong Kong’s democratic movement and a passionate defender of the underground Catholic church, painted a very negative picture in interviews with the media.

His view is that an agreement signed in 2018 between the Vatican and Beijing was a capitulation and that the underground Church is on the verge of being wiped out. He believes that the faithful in the People’s Republic of China  are being forced to join the “patriotic Church” and that seven decades of loyalty to the Pope count for nothing.

Pope Francis, who signed off on the agreement, looks at it differently. He insisted in 2018 that he will still appoint the bishops. “When there is a peace accord or a negotiation, both sides lose something … and we will move ahead,” he said. “This was no improvisation. It is a journey, a real journey”.

From the point of view of the Vatican, a controversial deal was better than no deal. Unlike Cardinal Zen, his successor as the Catholic bishop of Hong Kong, Cardinal John Tong Hon, has defended the agreement. So the situation is, to say the least, murky.

Whoever proves right about negotiations with a government led by Xi Jinping, no one can deny the heroic struggles of Chinese Catholics who fought the good fight and stayed true to their faith. Their martyrdom helps to show why the agreement continues to be so controversial and so painful.

Back in the 1950s Catholics, unlike Protestants, largely did not join the Communist government’s calls to “denounce foreign imperialism” and cut all foreign ties. Until 1957, no bishop in China joined the government body. The first Judas Iscariot amongst Chinese Catholics was a priest in Guangyuan, Sichuan Province, Fr Wang Liangzuo. However, government persecution by then had already begun.

Fr Chang, a Jesuit priest in Shanghai, was one of the first martyrs. From a devout Catholic family, Chang was sent to France by the Jesuits in 1932 to further his studies. Upon his return to China in 1940, he was ordained a priest. A highly talented man with a doctorate in literature from Paris and a passion for education, Fr Chang was the Principal of Shanghai’s College St. Ignace and then Dean of the Literature Department of the Catholic Aurora University in Shanghai.

In March 1951 Father Chang refused to accept the Communists’ “Three-Self” principles and was denounced as a “counter-revolutionary”. He was not tried by the authorities but was still sent to jail. The Irish Columban missionary who was the main founder of the Legion of Mary in China, Fr Aedan McGrath (also jailed in Shanghai in 1951), recalled seeing Father Chang being tortured and vomiting in the cell across from his. In November 1951, Fr Chang was martyred in prison. His requiem mass was attended by thousands of Shanghai faithful, who would go on to endure horrible fates and face severe persecution themselves.

Perhaps the best-known Chinese Catholic leader in the West, Cardinal Ignatius Kung Pin-mei, was also from Shanghai. At the time of the Communist takeover, he had every opportunity to leave China as the Bishop of Shanghai in 1949-1950. Instead he opted to remain and ended up imprisoned for more than three decades — from 1955 to 1986.

His crime? Well, he led the Shanghai Diocese in defiance against the “Anti-Imperialist Patriotic” movement organized by the Communists which asked churches to cut ties and become loyal to the government, not to the Pope. Bishop Kung ordered all churches in Shanghai to not surrender and not to compromise with the government. Under his leadership, many Legion of Mary members refused to join the “Catholic Patriotic Association”.

Cardinal Kung’s inspirational leadership made Shanghai, and the Suzhou and Nanjing dioceses adjacent to it, one of the most loyal and faithful Catholic resistance areas in China. (Cardinal Zen of Hong Kong is also originally from Shanghai and moved to Hong Kong in 1949, which partly explains his staunch support for the underground Church.) It suffered immensely for it.

Kung Pin-mei was arrested in 1955 and dubbed the leader of a huge counter-revolutionary clique, together with hundreds of Shanghai Catholics. He was imprisoned for 31 years. He was made a Cardinal in pectore by Pope John Paul II in 1979, but he only learned of his elevation years later. He finally met the Pope in 1989 and 1991. Cardinal Kung survived to the mature age of 98. Many of his fellow Shanghai Catholics perished decades earlier.

An unsung Catholic hero, Fr Zhang was from the northwestern province of Shaanxi and lived a life which makes a Hollywood blockbuster seem tame.

Born in a devout Catholic family, Fr. Zhang was sent in 1930 by the Italian Franciscans in Shaanxi province to their Italian headquarters. He was ordained as a priest in 1937. Caught up in World War II in Europe, Fr Zhang was selected by Pope Pius XII to become the chaplain for British and American prisoners of war held by the Axis Forces in 1940.

In 1943, upon learning that his POWs were going to be executed, Fr Zhang made a courageous decision: he persuaded the camp guards to release over 4000 POWs. Infuriated, the Fascists arrested him and sentenced him to execution by firing squad in Avezzano. Miraculously, on the day, Allied air forces bombed the area, and Fr Zhang escaped with other prisoners into the mountains of L’Aquila. He was eventually rescued and sent to Rome.

His adventures were only beginning. Upon returning to China after the war, he was awarded the title of “National Hero” by the ruling KMT regime and even met Generalissimo Chiang Kai-shek. After the Communist takeover in 1949, Father Zhang was sent back to his native diocese of Sanyuan. It was from that time that he started to lead the resistance against the patriotic church. He was jailed from 1959 to 1980.

In the 1980s he became a legend. He established a flourishing Catholic community in the village of Zhangerce in his native diocese and led the underground church there. The village soon became a magnet, a pilgrimage site for thousands of Catholics. Fr Zhang held large Masses every Easter well into the 1990s. Zhangerce even became the target of criticism in a People’s Daily editorial criticizing the “resurgence of superstition” – but this helped to promote the village and make it known to Catholics nationwide. Fr Zhang was dubbed “Pope of the East” by Sanyuan locals.

In November 1989, Father Zhang was instrumental in organizing the “Sanyuan Conference”, where dozens of underground church heavyweights gathered in Zhangerce.

It was this underground episcopal conference that formed the backbone to the loyal underground Catholic church in China for the next few decades. The defining moment of the conference was the election of Bishop Peter Joseph Fan Xueyan of Baoding as head of the underground Chinese Catholic Bishops Conference, a direct act of defiance to Beijing.

Shortly afterwards, most of the participants were arrested but their goal had been achieved. A nationwide underground Catholic church resistance movement had been created. Fr Zhang was detained until 1990 even though he was already 83 years old.

In 1992 and 1993, Fr Zhang managed to visit Italy. He was warmly welcomed in L’Aquila and celebrated for his heroism in World War II. He also met Pope John Paul II and was warmly embraced by the Pontiff.

The leader of China’s underground Church and the man who revived it after the horrors of the Cultural Revolution, Bishop Fan, of Baoding Diocese, is to this day the spiritual leader of the underground faithful. He and Fr Zhang both were sent to Italy by the Church to study, with Bishop Fan going to the Pontifical Urbaniana University. In 1934 Bishop Fan was ordained and then sent back to serve in China.

During the Sino-Japanese War, Bishop Fan worked hard in his assigned diocese of Xuzhou to fend off the Japanese, KMT and Communist armies who fought in the area.  By 1949 he was assigned to Hubei Province and was in Wuhan when the civil war caught up with him. He decided courageously to stay in China like Cardinal Kung in Shanghai, because he believed his calling was in China.

In 1951 Fan became the Bishop of Baoding, which to this day is a stronghold of the underground church. He made a vow to remain loyal to the Pope no matter what and refused to acknowledge the authority of the Catholic Patriotic Association. He was sentenced to a decade in hard labour in exile. In 1969 he managed to return to in Baoding but he was still forced to do hard labour and was under constant surveillance.

The year 1976 marked a turning point. Pope Paul VI wrote Bishop Fan a letter and praised him as a loyal shepherd. Because of this, he was arrested again and remained in jail until 1980. As soon as he was released, Bishop Fan began rebuilding the church. At the time, many parishes had no priests and the underground church was in dire straits, He received permission from Pope John Paul II to ordain many priests despite the fact that many of them did not have proper theological training in seminaries.

One of these, Su Zhimin, became the Bishop of Baoding after Fan — and has been missing since 1997. But desperate times call for desperate measures, and it worked. By 1989 when the Sanyuan Conference came about, the underground church led by Fan had gained back many faithful, rebuilt churches and is now in the majority in several large dioceses in his native Hebei Province, which has China’s largest Catholic population.

Bishop Fan was martyred in 1992 after being secretly taken away by police following the Sanyuan meeting. Detained on an island in the middle of a reservoir, Bishop Fan continued to strike fear into the authorities even after he was martyred. His memorial attracted 150,000 faithful in April 1992 and calls for his canonization have been growing ever since.

This is just a snapshot of the trials of the underground Chinese church. Millions of Chinese Catholic are now forced to be in communion with the official church with its formerly excommunicated bishops. Some of them are said to have wives and children. Some of the loyal bishops have been abandoned. It’s not surprising that Cardinal Zen feels betrayed.

In this atmosphere of recrimination, some Catholics are taking things into their own hands. In 2016, a priest named Dong Guanhua made himself the Bishop of Zhengding without the approval of Beijing or the Vatican. He is estimated to have thousands of followers, and was even interviewed by the BBC. Online, there are young Chinese Catholics who speak English and are now using that in reaching out to fringe organisations like the schismatic Society of St Pius X for help, with one young man rumoured to be studying in their seminary in Southeast Asia.

In short, from the outside at least, the Catholic Church in China looks disunited and chaotic nowadays. The clock seems to have been wound back to 1981, when Bishop Fan was released from prison. Perhaps that is what the cunning Communists wanted to achieve when they negotiated the agreement with the Vatican.

William Huang was born and raised in China, he writes for Mercator.net and his article is printed here with permission

Culling in the care homes? The right to die – if you haven’t already died of Covid