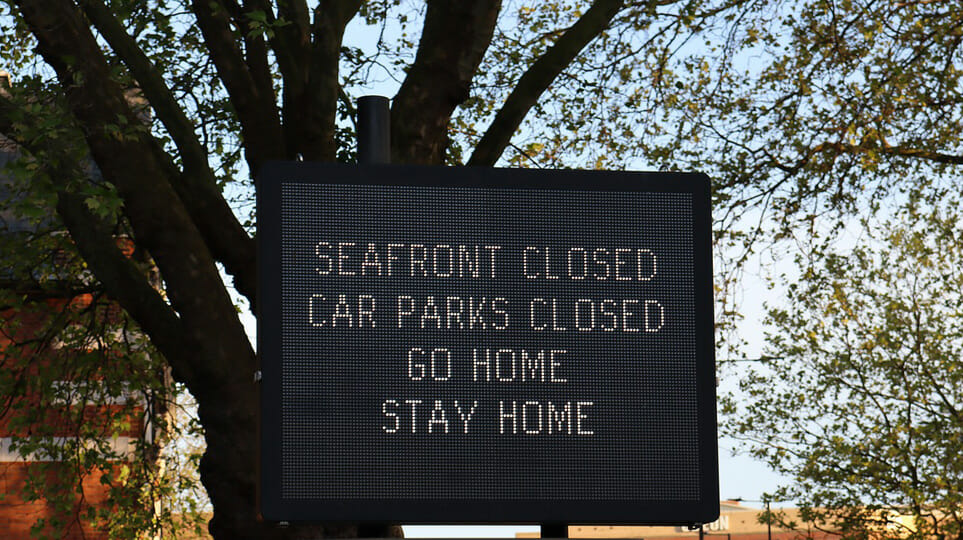 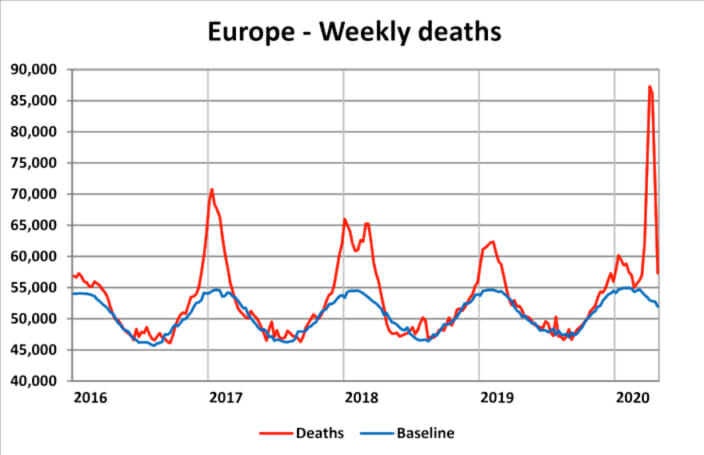 The winter flu season is very clear for nearly every year in the graph. The euromomo analysis team also have a baseline figure of expected deaths which rises and falls regularly from winter to summer each year and is an average of around 50,000 deaths per week. The baseline figure is useful to measure the excess deaths for each week of the year above their expected values (they can also be below the expected value but these tend to be very small when they occur as can be seen in the graph). It is very clear that the winter flu seasons of 2016/17 and 2017/18 were particularly bad. The 2019/20 flu season is also visible and appears to have ended around week 8 of 2020 (when deaths more or less returned to expected values). The impact of Covid-19 on excess deaths in Europe from that point are clear in the graph, however, Euromomo stress that data from the last few weeks need to be read with caution despite their applied corrections to figures (more on this below with respect to Ireland).

The excess deaths due to flu (or Covid) each winter season is the area between the red graph and the blue baseline figure. Generally the flu season starts around week 47 each year and continues for around 10 to 15 weeks into the new year. The calculated excess deaths each season and the Covid-19 deaths, to date, are graphed below. 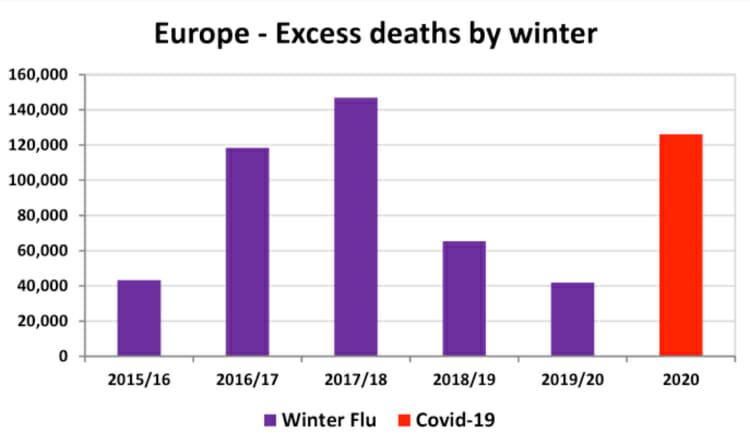 Despite the unprecedented high peak weekly death figures the actual Covid-19 excess deaths are not yet higher than the winter flu season of 2017/18. This is not an impression that one would get from a review of media coverage of the pandemic. Clearly, without social distancing (at a minimum) the Covid-19 deaths would be significantly higher by now and would, in all likelihood, greatly exceed other flu seasons. The pandemic isn’t over and a second wave is possible so the final excess deaths from Covid is not yet known. The media coverage and the draconian economic and social lockdowns (unprecedented in Europe both in times of peace and war) is in sharp contrast compared to the run-of-the-mill flu season occasional media coverage and mild restrictions on the public’s access to hospitals. Some people have argued that Covid-19 is nothing worse than a bad flu season, but, without social distancing, it is hard to see that being the case based on these figures. With social distancing, it increasingly appears that the final outcome of Covid-19 will be of a similar scale to a flu season. With the projected excess deaths figure and the growing body of evidence that lockdowns brought little, if any, additional disease transmission reductions, there is likely to be a severe backlash against politicians when the full economic cost of what they have done becomes apparent. My money is on the same media leading that charge despite their cheerleading for draconian measures and sensationalist coverage in the first place. Some things will never change!

How do the excess deaths figures look in Ireland specifically? The graph below is the Euromomo graph for Ireland (graphed as number of standard deviations from expected value). It shows no increase in expected deaths for the last number of weeks despite Ireland having a high Covid-19 death per million population figure compared to other countries. In fact, it is showing a death figure below expected values.

This graph didn’t make sense until the latest bulletin from Euromomo was read. Ireland alone is highlighted for their poor data where it states ‘Note on data from Ireland: In Ireland, as a result of very significant delays in death registrations during March and April 2020, due to the COVID-19 pandemic, weekly z-scores of excess all-cause mortality do not reflect current COVID-19 (and non-COVID-19) excess mortality in Ireland.’

Out of the 24 countries in this collaborative network, only Ireland is not capable of getting their act together and keeping their data up-to-date. As I stated before in my previous article on whether the lockdown was justified, the Government and NPHET claim to be making decisions on a scientific basis but without good and up-to-date data there is simply no way that this can be so. The Government and NPHET’s early stage response could be characterised as sluggish and careless while their late stage response is all panic and over-reaction. They will defend themselves in the coming months with protestations of ‘20/20 hindsight’ and ‘hurler-in-the-ditch’ etc. but the ineptitude on display in real time during this crisis is clear to see for anyone who cares to admit it.