Free speech is a test of character – and RTE failed 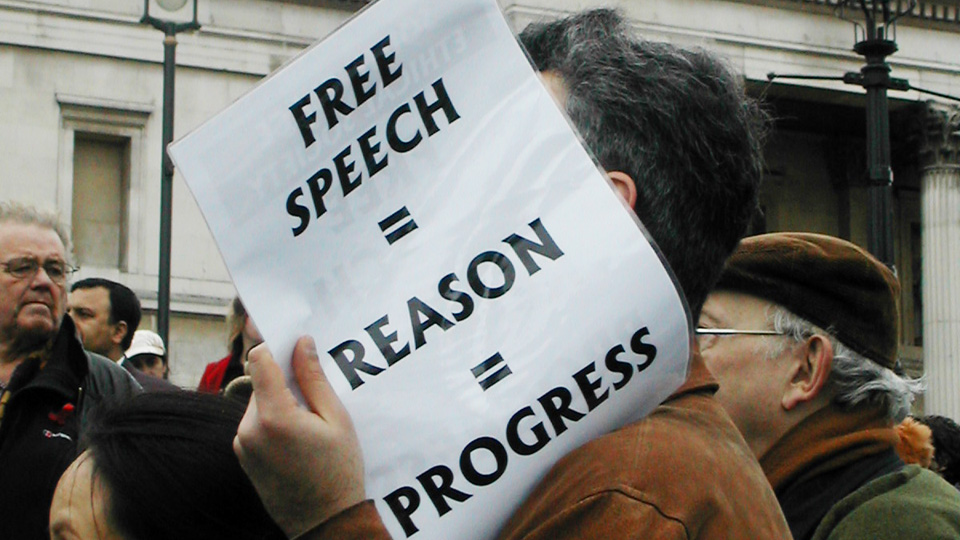 Freedom of expression, in a free society, is not unlimited but it should be allowed a very wide gate to run through. It is limited by other rights that belong to others – the right to a good name, to not be libelled as well as the right not to have violence incited against a person or a group. Outside of those restrictions, the consensus over the last century has been that you can say what you want but are then open to rebuttal, ridicule and social opprobrium when you go too far.

But accepting a world where speech and opinion should be unrestricted comes with responsibility. How you use this freedom is also a test of character. Society is the judge of character. The zeitgeist and social mores tend to dictate how society judges those who push the boundaries of what is acceptable, with the boundaries changing as the times change. Unfortunately, as times change, so too does the desire to enforce and legislate for acceptable speech, opinion and expression. This is always a dangerous area for the law to walk into. The moral majority continue to exist – only wearing different clothes.

Ireland quite recently removed the legislation which outlawed blasphemy – with the approval of 65% of the Irish people the 37th amendment to the constitution was enacted in 2018.  Although the common law offence of blasphemous libel, applicable only to Christianity was last prosecuted in 1855 and the 2009 Defamation act was never actually prosecutable, the presence of the word ‘blasphemous’ in the constitution was an irritant to a lot of people – including those who sought to manufacture an investigation against Stephen Fry in order to hold it up to ridicule.

Unfortunately, once removed from the constitution, the State, and many lobby groups, have sought to have a new form of blasphemy inserted into the statute books. While offences against religion, God and believers are deemed fair game, many other new types of perceived offences are going to be legislated for under proposed new hate speech legislation which will go far beyond whatever potential chilling effect the blasphemy reference in the Constitution had on free speech.

It is ironic that many of those who campaigned for blasphemy to be removed as an offence are actively campaigning for it to be reinserted into law in Ireland in much more draconian manner. As Gary Kavanagh reported in GRIPT on 21st December 2020, the report ‘Legislating for Hate Speech and Hate Crime in Ireland: Report on the Public Consultation 2020’ recommends the introduction “of draconian and expansive hate-based laws in Ireland but contains absolutely no recommendations on how to protect free speech”, while shifting the burden of proof to the accused and removes intention or content as the primary issue focussing on the perception of offence by the supposedly offended.

It is thus, freedom of speech becomes a purely subjective matter, subject to the whims and mendacity of the perpetually offended. RTE’s New Year’s Eve Countdown would undoubtedly fall under the category of hate speech if the Report is to be taken seriously and enacted into law. The satirising of God as rapist is undoubtedly offensive to many believers and they have a right to be angry about it. Does that mean that whoever produced the programme ought to be criminalised? I think not.

Quite clearly, the producers went out of their way to ridicule and lampoon the Christian faith. If these were individuals or independent media, subject to the vagaries of the market, then Catholics can choose to tune out. And if enough do so, the broadcasters lose viewers, lose advertisers, and revenue, and thus fall on their sword. But this is not case for RTE. Catholics and Christians cannot walk away from their license fee and for this reason, RTÉ should be held to a very exacting standard of decency, and character, in how it represents all sectors of society. In fact, RTÉ’s own “Journalism & Content Guidelines 2020” reasonably state: “Whilst Ireland no longer has a blasphemy law, common decency demands informed sensitivity in the way RTÉ covers and refers to people’s religious beliefs, histories, practices, festivals, symbols, language and rituals.”

Someone, somewhere in RTÉ, understood that there is a requirement for decency and respect however this guidance seems not to have made its way to the management who approve the content of its programming. RTE is the national broadcaster. More than any other outlet it ought to understand not only the rights of free expression, but also the responsibilities that come with it. Many a political theorist who lived in the real world understood that freedoms can only exist when they are lived responsibility.

Freedom of all kinds is a test of character. When you have freedom, you can do with it what you wish. But it is what you do with it that determines the type of person or institution that you are. RTÉ has showed Ireland what it is on New Year’s Eve. Of course, this is not the first time RTÉ has shown the type of institution that it is. Most recently, Kevin Myers, after 3 years of fighting, had his good name cleared and received compensation from RTÉ’s taxpayer funds for the calumny that was carried out against him. Unfortunately, a lie gets halfway around the world before truth puts on its boots and most people are completely unaware that Kevin Myers is not a holocaust denier as RTÉ claimed he was. Before that, Fr Kevin Reynolds had his good name destroyed by RTÉ and had to go to the courts. Untold damage done to the man – but his Catholicism, his priesthood, were likely to have been the reasons RTÉ were so quick to jump to conclusions.

While RTÉ apologised – initially through the side of its mouth ‘to those who were offended’ after thousands of complaints were submitted but not for the content itself, and continued to host this piece of affrontery on its media player to be watched over and over again for a further five days (paid for with the TV license/tax of those that had their beliefs belittled) until its Editorial Standards Board determined that the sketch “did not comply with RTÉ’s own standards”. Comparing the apologies of RTE with that of Aongus MacGrianna, allows for a comparison of character. In a tweet Mr Mac Grianna said he wished to apologise about the sketch. “Truly I am deeply sorry for the offence, distress and hurt caused. It was wrong for me. It was wrong of me.”  Such contrition is not common when it comes to admitting offence to the faith in Ireland and is to be welcomed – and contrasted with that of RTÉ.

RTÉ now will “make a voluntary disclosure of non-compliance to the Broadcasting Authority of Ireland (BAI) and engage with the authority in this process” and will request its own Editorial Standards Board to review the processes that lead to production. Little seems to have been learned over the years.

While many Catholics may regret the loss of the theoretical restrictions on blasphemy for reasons that non-believers do not understand – it is offensive not to the believers but to God – they do not wish to see the type of hate speech proposed being enacted into law. It is the new moral majority in Ireland that are clamouring for a new censoriousness while at the same time commenting in response to the RTÉ broadcast that this is free speech and that those offended should just suck it up. Yet, when the offence is on the other foot, the refrain changes: there is free speech but free speech has consequences they say – gleefully cheering when someone like John Waters or Kevin Myers are cancelled; or when some regular Joe loses their job for expressing an opinion that is no longer permitted in the public sphere.

If the mantra that ‘free speech has consequences’ holds when it means you lose your job, or are subject to criminal conviction, then the same people may as well admit that North Korea has free speech – just that it has consequences. For RTÉ, free speech exists with no consequences simply because anyone offended enough to not pay their TV license risks a fine or imprisonment.

The modern approach to free-speech is summed up in the spat between Frankie Boyle and Ricky Gervais, two comedians who generally hold no sacred cows – or had until very recently when Boyle got up on his high horse to reprimand Gervais for his insensitivity to trans people – this the same person whose freedom of speech allowed him to mock a disabled child in a very unseemly manner – along with a host of other put downs of Madeleine McCann, Baby P and people with Down’s syndrome. Yes, many people laughed. Others didn’t. Some complained. But ultimately, free speech allows you to see the character of the speaker, as the Spectator summed it up: a self-righteous born-again wokist who built his entire career on ‘punching down’. With that, you can draw your own conclusions as to the character of RTÉ