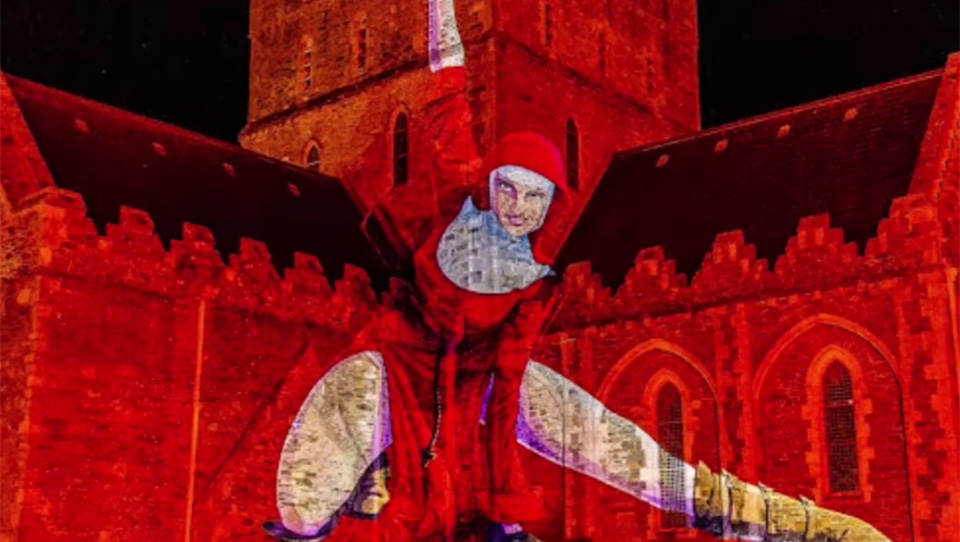 HerStory, founded in 2016, describes itself as telling “the stories of modern, historic, and mythic women”. On St. Brigid’s Day this year, this movement stuck firm to its commitment to furthering the mythic while denying the historic reality.

Using some cruel and grotesque imagery, HerStory “journeyed into the heart of Ireland to help heal the heartbreak of the Mother And Baby Homes scandal” by depicting the religious sisters of Ireland’s recent past, in what can only be described in the language of 2021, as misogynistic.

An image of nun shaving a woman’s head, along with another nun holding what looks like a dustpan, concealing, or sweeping, a child’s skeleton under a carpet, was projected onto Sean Ross Abbey.

Journalist David Quinn described it as “one of the most stunningly anti-Catholic images I have ever seen”. The projection was funded by the The Community Foundation for Ireland, and, apparently, by the Nenagh Guardian.

While it is understandable that some may be disappointed that their individual stories are not reflected in the accumulate overall findings of the Commission of Investigation into the Mother and Baby Homes, the continued attempts to hold on to and perpetuate the ‘othering’ of the Religious Sister is an injustice in itself.

Are these Sisters not women also? Were they often not victims too of overwork and hardship? Why the need to continue to perpetuate the abuse, vitriol and hate that they have suffered in the past twenty years rather than seeking to move towards healing?

Those images seem little more than sensationalist, hate-mongering, grasping to maintain the narrative of the past that has been created to exact revenge on the Catholic Church for the harsh reality of pre-modern Ireland.

While the findings of the Commission point in that direction, there has been a deliberate attempt to delegitimise the report and to resurrect what ought to have been the ending of the unfair depiction of the Religious Sister as the source of all that was bad in Irish society.

Apart from the initial reportage on the main finding of the Report that “The story of mother and baby homes in Ireland is complex and its nuances cannot easily be captured in a summary … Ireland was a cold harsh environment for many, probably the majority, of its residents during the earlier half of the period under remit. It was especially cold and harsh for women. All women suffered serious discrimination. Women who gave birth outside marriage were subject to particularly harsh treatment. Responsibility for that harsh treatment rests mainly with the fathers of their children and their own immediate families. It was supported by, contributed to, and condoned by, the institutions of the State and the Churches. However, it must be acknowledged that the institutions under investigation provided a refuge – a harsh refuge in some cases – when the families provided no refuge at all.”

None of these facts seem to matter in the quest to point the finger of blame solely at the nuns, ironically, for a feminist group, to ignore the failings of the fathers who failed to stand by the women they made pregnant.

The report is replete with uncomfortable stories of mothers telling their daughters not to darken the door of the homestead again; that the majority were brought to the homes by their families; of young women seeking and getting the help of priests when they felt they had nowhere else to turn in society; of religious homes being the only refuge available with a government and a media that showed very little – if any- interest in the plight of unmarried mothers until the 1970s; of the Religious Sisters who worked hard doing manual labour in the face of a dearth of funding and support to make the homes habitable.

It is easy to avoid the historical reality when there is populist support for the ongoing narrative, with the cheap and hate-filled imagery gaining more publicity than the actual facts within the report.  Using St. Brigid’s Day, a Catholic and Christian Feast Day in Ireland, to portray Irish women (because Nuns are women too) as evil, Satanic is no way to bring about any form of healing. All that it achieves is to create another group of women as ciphers for failings of humanity.

The feminists in HerStory overlook the work that is still being done by nuns in Ireland and across the work to help the sick, the poor and the disadvantaged. These religious sisters were strong, brave independent women long before it became fashionable.  Instead they are being portrayed as evil and inhuman – a group of women being demonised and attacked with, it seems, lavish funding from the Community Foundation of Ireland.

If HerStory took the time to understand history, they would see in their own actions, the reflection of the Salem Witch Trials, of Blood Libel, or any other historical ‘othering’ – a tactic used to protect and insulate the prevailing narrative from historical scrutiny.

Myths can be dangerous things – undoubtedly those carrying out and fomenting the fervour that went with the Salem Witch Trials felt that they were doing some service to society. Somehow, paradoxocially, herstory.ie feels that their approach is designed to heal some wounds as well. Lancing a boil, perhaps, like a well-meaning doctor may have done in the past, only to cause an even more virulent infection?

Does the border make “quarantine” for UK flights a nonsense?