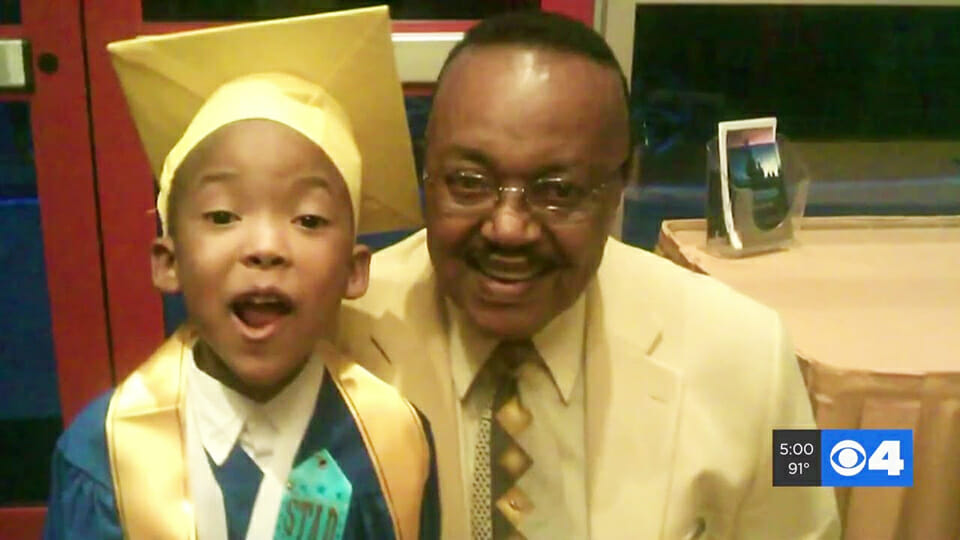 On Tuesday last week hundreds of thousands of people witnessed an elderly black gentleman bleed to death on a St. Louis sidewalk. David Dorn, who  was buried yesterday, was a 77 year old retired police captain who was shot in the chest by a looter whom he interrupted stealing a television from a pawn shop.

Dorn, who by all accounts was a decent man who served honourably in the police for 30 years, was the type of man who couldn’t stop serving his community. After retiring he took a job as a security man and he would frequently check in on his neighbours businesses if there was any concern. On the night of Tuesday June 2nd he went to a friend’s pawn shop business to guard it from looters.

He wasn’t the only black victim of the rioters. At least four other black people,  including a federal police officer have been killed in the riots, but the case of Dorn is particularly heartbreaking, as we all saw it happen and grieved for him, as he drew his last breaths before the eyes of the world.

The revolution being televised is not pleasant, and I wished that the person streaming this poor man’s death would have dropped his phone and held his hand or said something to comfort to him in those last desperate moments. Tell him he would be ok. But no, the death of David Dorn was part of the perverse digital obsession of recording every moment of life except its real meaning.

I grieved that this poor man’s last breaths of life were so utterly alone and so utterly public. For his family this must be particularly painful and it is probably right that the video was removed from facebook, but why is such a tragic story not getting any media coverage?

Following his murder, David Dorn has been trending on twitter but the media have been strangely silent in recognising it. The left wing, fake-news media in the US have studiously ignored this murder of a black man by a hoodlum, at precisely a time when all their focus is on black lives.

In Ireland, RTE, whos coverage of American news is a raggle of hand-me-down stories from the left wing propagandists of the NYT and CNN etc, have not mentioned the death of David Dorn. I have tagged RTE on twitter and asked why they haven’t mentioned his death on three separate occasions, but that doesn’t seem to suit the narrative.

Maybe they checked out what happened and watched the video of his murder. I don’t know. But it seems that the murder of this black man is just not an interesting story to the left wing media.

It seems Black Lives Matter only when it feeds a narrative they like.

What have the organisation Black Lives Matter achieved anyway? Considering they could have made a bold statement after the shocking murder of George Floyd by Derek Chauvin, it is clear they have failed the black community spectacularly. They could have started a real conversation about police reform and plenty of other things, but all they achieved was to set black communities back a decade. These black businesses and neighbourhoods will not be easily rebuilt.

So who exactly are Black Lives Matter? A quick look at their website and we see a list of the usual regressive left, intersectional interests. These are marxists in every conceivable way, with all the lust for intergroup conflict, self destruction, and aims that are so mutually exclusive that they look like they were written by Orwell. Of course Orwell understood the marxist mindset well, so his parodies of socialists and the comunist utopia were so accurate that they actually used in the playbooks of marxists around the world.

Here is one of BLM’s aims, listed on their website, which has been belied by the past week. “We intentionally build and nurture a beloved community that is bonded together through a beautiful struggle that is restorative, not depleting.”

“Restorative and not depletive! Are you kidding?

Is this what black leaders are spending their time on?

Certainly not the ones CNN and RTE choose as spokespeople for the black community. You know the ones; people like Al Sharpton. Neither Al Sharpton, nor the crew at CNN say anything about the young children and mothers murdered in drive by shootings in black neighbourhoods. Why not? Is this not an outrage? I looked at the account of conservative black comedian Terence K Williams and he asked that question “where was Al Sharpton when these babies were killed”

Harvard graduate, economist, and social commentator  Thomas Sowell calls these people race hustlers. Born into a black rural community in North Carolina, he has done enough analysis of the history and the numbers to write nearly 40 books on economics, race relations, politics, and political philosophy. He argues that it is not in the interest of intellectuals and race hustlers to address the problems faced by black communities because that would leave them out of a job.

As he put it “Black votes matter to many politicians — more so than black lives. That is why such politicians must try to keep black voters fearful, angry and resentful. Racial harmony would be a political disaster for such politicians.”

Brown University economist, Glen Loury, who was raised on Chicago’s southside says that the black community has many problems but police racism wouldn’t be even close to the top. He has been strongly arguing for years that the biggest problem for Black communities is a moral one. He has looked at the numbers; unemployment and prison and all the talking points, but he says that people need to look inward and recognise that some part of the problem is the young man who puts a bullet in another young black man and leaves him bleeding out on a street corner. He said it “is an avoidable and utterly despicable aspect of urban black life today. I believe that this killing is in no sensible way understandable as the inevitable consequence of white racism.”

At a lecture he delivered at the Watson Institute  he said that “there needs to be a communal as well as a national response to this crisis. There needs to be
mobilisation on a national scale organised around reacting to this behaviour; with the same vigour and resources given to bringing a rogue cop into the dock; insisting that it is not going to be acceptable in our community.”

“Somebody needs to stand up and insist that this contemptible behaviour is incompatible with any notion of blackness that is worthy of being defended.”

He says he believes nobody wants to address because it doesn’t align with their political scam. In an interview on Canadian Television he asked of those who affirm the value of black life “ will we take a stand on behalf of black life, will we condemn, unequivocally, the contemptible behaviour that’s at hand. I don’t have any problem with being a sociologist and on the other hand being a human being who hasn’t lost touch with his moral sensibilities.”

He acknowledged that this doesn’t exhaust the conversation and there is a crucial discussion on investment and housing, and employment but he says “there is a stilted, distorted, stick figure reaction to these events that points the finger everywhere except inwards”

Here’s another beauty from BLM: “We disrupt the Western-prescribed nuclear family structure requirement by supporting each other as extended families and “villages” that collectively care for one another, especially our children.”

Got that? The biggest issue for black communities isn’t that 74% of children have no father in their life, it’s that the remaining 26% have fathers. In fact nobody should have any family ties, they should be raised by this wonderful nebulous community of gang bangers and part time lovers.

Do they really mean that? Of course they do! This is exactly what committed marxists desire, the destabilising of any loyalties which are not to the cult; the family being the biggest threat. If you want to see how this poison works just look to the Soviet Union and the cult of the “child martyr”, Pavlik Morizof. There’s a real life example of this destructive and anti family philosophy that will shake your moral foundations.

Loury is not alone in saying that the biggest problem the black community in America have is fatherless homes. There is a long list of black intellectuals making this point over and over and being studiously ignored.

So why is it that RTE and the left wing media still haven’t mentioned the murder of David Dorn? Is it that seeing this heartbreaking tragedy, this senseless murder, unfold before our eyes would cause people to pause?

Hearing and watching the human tragedy of Dorn bleeding out on the sidewalk, his last struggling breaths pathetically wheezing, and the distressed young man recording the looting saying “killed him for a tv”: would that cause the rioters to pause and question the sense of their destruction?

Why have we still heard no tears for David Dorn on RTE and in the left wing media here or in America? Is it because his life and death doesn’t serve their agenda?

Who pays for this dishonesty? In his extensive bibliography, Thomas Sowell gets to the human heart of the matter. As he says:“It is so easy to be wrong—and to persist in being wrong—when the costs of being wrong are paid by others;”

“Those whites who feel a need to do something with blacks and for blacks have been some of the most dangerous “friends of blacks,” he claims. And “Intellectuals may like to think of themselves as people who “speak truth to power” but too often they are people who speak lies to gain power.“

May David Dorn rest in peace. His life mattered too.